From the level of applause at the first all-candidates meeting on Monday evening, it might seem the Conservatives are leading in Richmond ridings.
Oct 1, 2019 5:14 PM By: Maria Rantanen 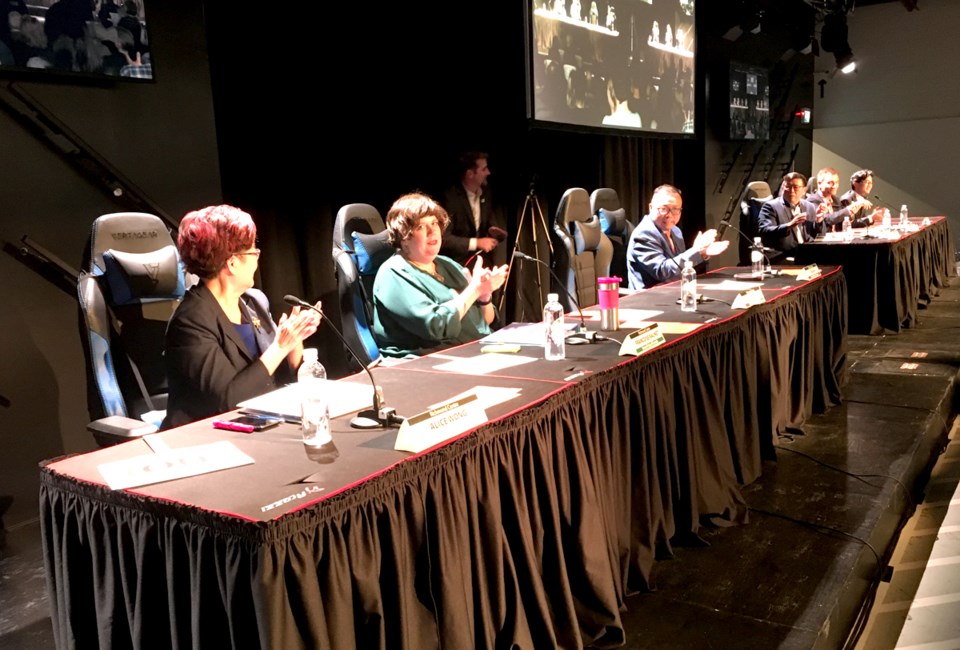 From the level of applause at the first all-candidates meeting on Monday evening, it might seem the Conservatives are leading in Richmond ridings.

But the event, put on by the Richmond Chamber of Commerce, might have drawn a more conservative crowd to listen to candidates answer questions about Canada’s stance on China, economic growth, housing and LGBTQ rights.

There were also mentions of the prime minister’s socks, the Canucks chances of making the playoffs and getting more money into the pockets of Canadians at the debate held at the Gaming Stadium.

The highest tensions appeared to be between incumbent MP Joe Peschisolido, defending his record, and his Conservative challenger Kenny Chiu with the latter accusing the Liberals of wasteful spending and dealing with China with disrespect.

In criticizing the Liberals’ record of dealing with China, Chiu called the arrest of Meng Wanzhou was the “last straw” that broke the camel’s back, and that relations were already strained after Prime Minister Justin Trudeau travelled to China and lectured its government on the environment, women’s rights and labour rights. In contract, Chiu said, Harper reminded the Chinese government that there was an international standard for human rights and free speech, but still maintained a mutually respectful relationship.

Richmond Centre MP Alice Wong, who is seeking re-election under the Conservative banner, said she travelled with Stephen Harper to China three times when the Conservatives were in power, and they came back with “very positive results,” but they also brought up human rights issues respectfully.

The NDP candidate for Steveston-Richmond East, Jaeden Dela Torre, said a diplomatic mission was needed to secure the release of two Canadians being held by the Chinese government – arrested after the detainment of Meng.

Francoise Raunet, Green candidate for Richmond Centre said Canada needs to be “firm” with China on the Canadian prisoners, but she also pointed out that there are human rights violations taking place against the Uighur people in western China.

Both Wong and Chiu criticized the Liberals handling of the country’s finances.

Peschisolido defended his government’s deficit, saying the Conservatives would cut services because of their “zeal” to balance the budget.

“A Liberal government says, we have a lot of issues out there to deal with and, you know what, it’s okay to run within a 1,000-to-800-billion-dollar economy, a deficit of $20 billion – particularly if your debt-to-GDP ratio is going down, which it is in Canada,” Peschisolido said.

Wong responded that a Conservative government would use money “efficiently,” unlike the Liberals who spent $60 million on money laundering but didn’t get any results.

Ivan Pak, Richmond Centre candidate for the fledgling People’s Party of Canada, was also challenged on his stance on LGBTQ issues. He was involved in opposing the Richmond School Board’s SOGI policy two years ago, a policy that gives resources to schools to handle issues around LGBTQ students.

Pak said he believes in protecting everyone’s rights, including the LGBTQ community, but he was opposed to the SOGI policy, which teaches a “gender fluid ideology” that should be the parents’ purview.

“I am not anti-LGBTQ - I have friends in the LGBTQ community,” Pak said.

On the topic of housing, Raunet and Dela Torre argued for housing co-operatives.

Raunet said CMHC should get back to its “core mandate” of building rental housing. She said she grew up in a housing co-operative and currently lives in one, calling it a “great solution.”

Peschisolido pointed out the Liberals have promised to replicate the vacancy tax that the B.C. NDP government has put into place, and, at one per cent, it should discourage speculation.

“A house should be a home, not an investment,” he said.

Chiu said he’s hearing on the doorsteps that life is becoming unaffordable and the next generation won’t have the same standard of living. He said a Conservative government would look to stamp out money laundering.

“We definitely don’t want illegal money coming into our housing market and making it even worse of a problem,” he said.

Pak said the PPC doesn’t have a housing platform because it’s in the provincial jurisdiction.

To watch the entire debate, put on by the Richmond Chamber of Commerce and sponsored by KPU, go to: