For the second Saturday in a row, pro-Hong Kong demonstrators who were putting up a “Lennon Wall” at Aberdeen Canada Line Station were met with pro-China demonstrators. One man was arrested by Richmond RCMP and later released.
Oct 7, 2019 6:20 PM By: Maria Rantanen 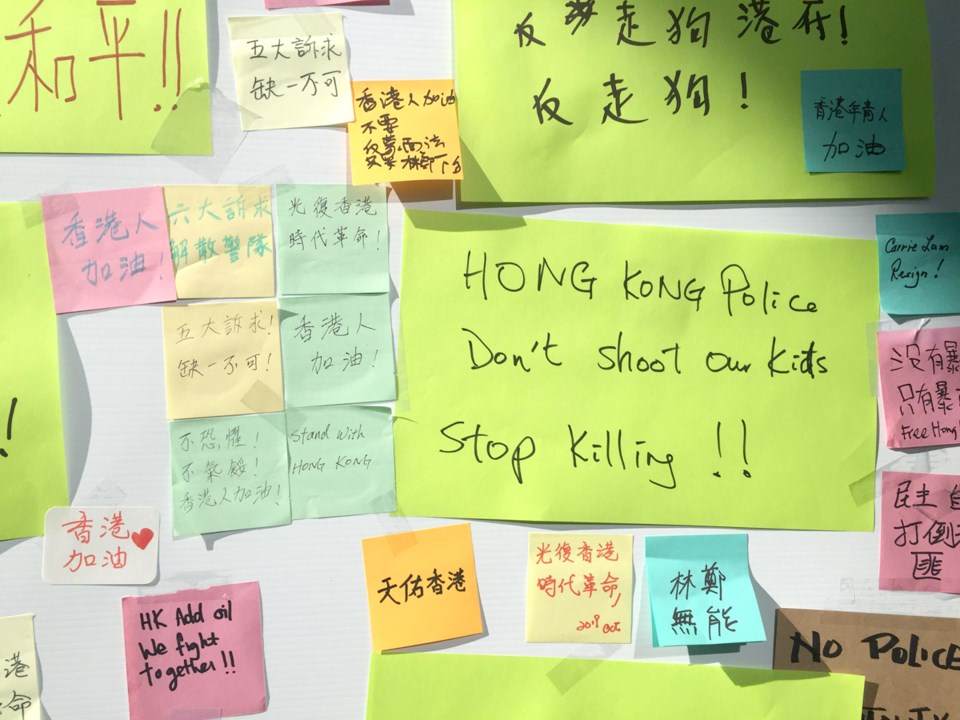 Messages were posted on the Lennon Wall at Aberdeen on Saturday.Nono Shen

For the second Saturday in a row, pro-Hong Kong demonstrators who were putting up a “Lennon Wall” at Aberdeen Canada Line Station were met with pro-China demonstrators. One man was arrested by Richmond RCMP and later released.

Federal election candidates Francoise Raunet, running for the Greens in Richmond Centre, Zhe Zhang, running as an independent in the same riding, and Ivan Pak, with the People's Party of Canada (PPC), were at the Lennon Wall.

Raunet said the protests in Hong Kong are breaking her heart, and she called the response by the Hong Kong police “heavy-handed” resulting in an escalation of violence.

“Having lived in Taiwan for five years, I am particularly sensitive to how China uses its considerable political and economic clout to suppress freedom and basic human rights in order to gain a political advantage on the world stage,” Raunet said.

Raunet said the Richmond RCMP conducted themselves “admirably” given the potentially difficult situation. She witnessed some yelling and some aggression, but police intervened quickly.

The peaceful expression of “all points of view” should continue and police should intervene to protect community safety if needed, she added.

“Meanwhile, we can continue to educate all Canadians about the rights to free speech and freedom of assembly and how important and fundamental, along with all other human rights, they are to Canadian society,” she added.

She added that Canada needs to make trade deals “contingent on respect for human rights.”

“This shouldn’t only apply to China, but any other country accused of human rights violations as well, such as Saudi Arabia, the USA, or the Democratic Republic of Congo,” she added.

Zhang said he supports the Hong Kong government and police, saying China is being “demonized” by Canada.

“Wholesale westernization and external pressure are the wrong goals and bad approaches,” he said.

Zhang said China is more open and westernized now and has “become better,” adding that the housing crisis has created an “anti-China sentiment.”

“The rise of China makes Canadians uneasy,” Zhang said. “The conflict with China is essentially a domestic crisis.”

NDP candidate for Steveston-Richmond East, Jaeden Dela Torre, didn’t go to the Lennon Wall on Saturday but caught a glimpse from the Skytrain. He said “peaceful talks and dialogue” need to be fostered.

“I support the freedom of speech and the freedom of opinion,” Dela Torre said. “People should have the ability to express their views and opinions just as long as it intends no harm to others and without fear of physical reprisal.”

Nicole Iaci, who is running for the Green party in Steveston-Richmond East, wasn’t at the Lennon Wall, but she said she believes in freedom of speech and the “power of peaceful protest.”

“As long as demonstrations are non-violent, I lift my hands in recognition and respect for those people who choose to come together to stand up for what they believe in,” she said.

Iaci said that being a diverse community is what “makes us stronger.”

“We may not agree on everything, but should agree on moving forward together and standing for a better future for our future generations,” she said.

Pak went to Aberdeen and added his own note to the Lennon Wall. He said he didn’t join the rally but was there to “observe the situation.” He said he won’t support any protests that incite violence.

“In a democratic country like Canada, we always uphold our democracy and freedom and respect all opinions,” he said. “Agree to disagree.”

Pak immigrated from Hong Kong to Canada, but he went back in 2001, returning to Canada in 2015. He said he left Hong Kong for the second time because he lost hope for the city he loved.

“I saw the changes, both politically and socially,” Pak said. “The influence of China, totalitarianism rising up. I no longer want to raise my children there.”

Joe Peschisolido, who is running for re-election in Steveston-Richmond East for the Liberal party, said people must show “restraint to avoid any violence.”

“I strongly urge that any gatherings are done peacefully where I hope that local authorities are using non-violent means to de-escalate tense situations,” he said.

He wasn’t at the Lennon Wall, but urged “constructive conversations” to move forward.

“Time and time again, Canadian leadership has demonstrated that we achieve greater success for change when we have peaceful conversations,” he said.