The Ministry of Health's latest weekly report on COVID-19 cases in long-term care homes has been released
Jan 15, 2021 5:15 PM By: Kirsten Clarke 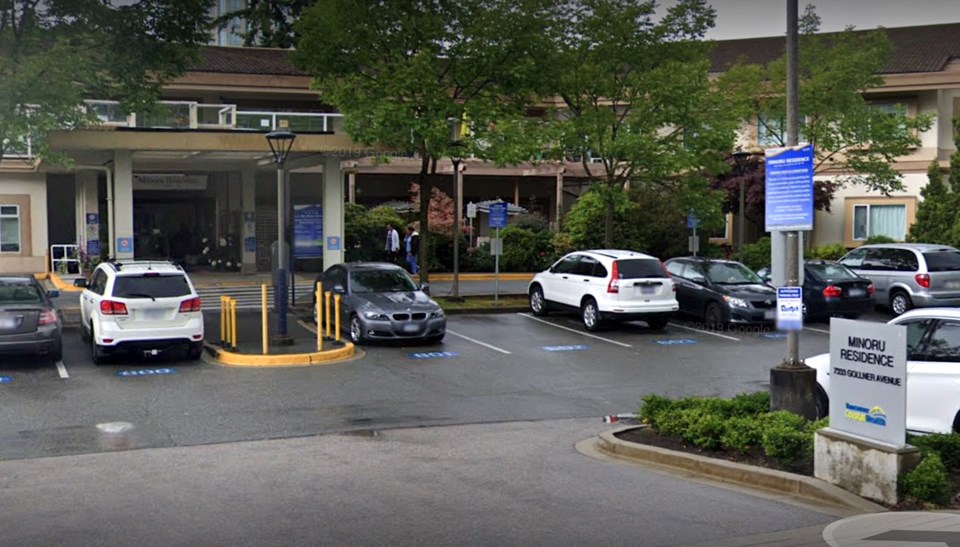 Over 100 people have tested positive in two long-term care outbreaks in Richmond, according to the latest data from the Ministry of Health.

70 people at Minoru Residence – a 250-bed long term care home near Minoru Boulevard and Westminster Highway – have tested positive for the virus, including 61 residents (up 12 from last week’s report) and nine staff (up three from last week).

Seven Minoru residents have died – up from the three deaths reported in the previous update.

The outbreak began in the 1 East unit of Minoru on Dec. 21. Then, on Dec. 27, an outbreak was declared in the 3 West unit. Since Dec. 31, the entire facility has been under outbreak protocol.

There is also a COVID-19 outbreak at Fraserview Intermediate Care Lodge, which was first declared on Dec. 12.

Since then, 41 people at the facility have tested positive for the virus – 27 residents and 14 staff. Six residents at Fraserview have died.

In total, the two outbreaks have infected 111 people.

The data is current as of Jan. 13 and was published in the ministry’s latest weekly report on COVID-19 cases in long-term care homes.

The case and death totals at Fraserview, however, have remained the same since the previous update.

An outbreak is only considered over if two incubation periods – 28 days – have passed since a case was last reported at a facility, the report notes.

B.C.’s seniors advocate, Isobel Mackenzie, said she will be launching a review of COVID-19 in long-term care facilities to understand what it is that the province did well, and what could have been done better, throughout the pandemic.

“If we look at wave one, we were feeling relatively comfortable and confident that we had managed things relatively well. That is not the feeling we’re coming out of wave two with,” she told the Richmond News.

The review will look at, for example, the use of personal protective equipment and other layers of protection, strain on staffing during the pandemic, the scalability of the government’s plan to protect long-term care and testing.

“It’s very stark to look at the percentage of outbreaks that were contained to a single case in wave one, versus what we’re experiencing now,” said Mackenzie.

“In wave one, more than half – close to 60 per cent – of outbreaks were contained to a single case, usually a staff member, every once in a while a resident. That’s not the case in wave two…most outbreaks now are spreading.”

Rapid test screening of staff could also be an added layer of protection in long-term care facilities, Mackenzie said, to help pick up any asymptomatic transmission.

A rapid test pilot was launched in some B.C. care homes last month, however, Mackenzie said she would like to see this at all of the province’s care homes. She has been calling for the use of routine rapid-test screening of care staff since the fall.

The News has asked VCH if rapid tests are being used at either Fraserview or Minoru.