TBILISI, Georgia — Demonstrators set up tents outside Georgia's parliament building and blocked the capital’s main avenue Tuesday to protest the arrest of the leader of the country's main opposition party.
Feb 23, 2021 10:10 AM By: Canadian Press 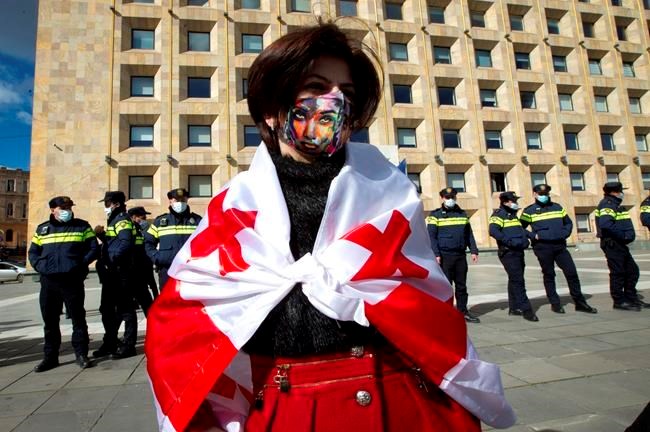 TBILISI, Georgia — Demonstrators set up tents outside Georgia's parliament building and blocked the capital’s main avenue Tuesday to protest the arrest of the leader of the country's main opposition party.

The demonstration came hours after police stormed the headquarters of the United National Movement and arrested its chairman, lawmaker Nika Melia.

Georgian media reported that about 20 other people were also arrested at the party's headquarters.

The political situation in Georgia has been tense amid allegations of voter fraud in the country's fall parliamentary election. The opposition is demanding a rerun of the vote.

Before the police raid, parliament members named a new prime minister to replace the one who opposed arresting Melia because of concern it would escalate the country’s political crisis.

Melia faces charges of inciting violence during protests that erupted in 2019 when a Russian lawmaker sat in the parliament speaker’s chair during a meeting of lawmakers from Orthodox Christian countries. He had been free on bail.

“We are building a democratic state, and everyone in the country, no matter to their taste and political views, must obey the law,” he said.

The U.S. Embassy voiced its disapproval, saying in a statement: “Today, Georgia has moved backward on its path toward becoming a stronger democracy in the Euro-Atlantic family of nations.”

“We regret that the call of the United States and other international partners for restraint and dialogue was ignored,” the embassy read.

The European Union appealed for calm.

“We are urging all sides in Georgia to show the necessary restraint, utmost restraint and responsibility, to avoid more escalation in the interest of the country and its people,” European Commission spokesperson Peter Stano said.

Salome Samadashvili, a prominent United National Movement member, vowed the protests would continue “until we reach first the release of political prisoners and then early elections later this year, because we need to go back to the chosen path of the Georgian people, which is a European future.”

During the October election, the Georgian Dream party, which has governed Georgia for the last eight years, tallied the largest share of votes at 48%. But opposition parties refused to recognize the results, claiming the count was manipulated.

Georgian Dream was created by Bidzina Ivanishvilli, a tycoon who made his fortune in Russia. But the party's popularity has dwindled steadily amid the country’s economic problems.

Both Georgian Dream and United National Movement are pro-Western and have the stated goals of establishing better relations with possible eventual membership in NATO and the European Union.

But the UNM denounces Ivanishvili's ties to Russia and claims the party pursues pro-Russia policies. The issue is highly contentious in light of a five-day war between Georgia and Russia in 2008 and Russia's control of the separatist Georgian territories of Abkhazia and South Ossetia.