Meagan Duhamel noticed a small sign by a family room door while staying with her baby daughter in a neonatal intensive care unit last fall.
Nov 18, 2020 10:05 AM By: Canadian Press 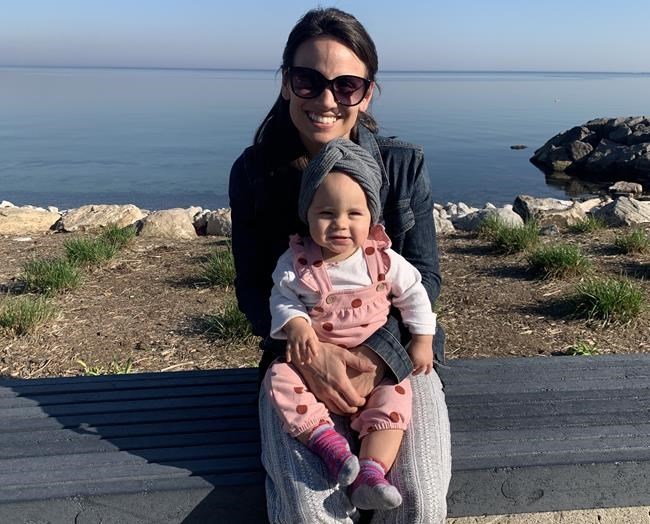 Meagan Duhamel noticed a small sign by a family room door while staying with her baby daughter in a neonatal intensive care unit last fall.

It read: "Champions Start Small" - the motto for the Sandra Schmirler Foundation - and the message stuck with the retired figure skater, who, like the late Schmirler, had won Olympic gold.

"I was like, 'Oh my goodness, isn't this so fitting that Sandra Schmirler was an Olympic champion athlete and here I am staying in this room sponsored by her (foundation),'" Duhamel said.

Her one-year-old daughter Zoey now thriving, Duhamel said the foundation was an easy charity choice as she competes with Wojtek Wolski on the CBC-TV skating competition "Battle of the Blades."

"It's something so personal to me," Duhamel said. "This charity helped me and I want everybody to see the good work that they do."

About 18 months before Zoey's arrival, Duhamel capped her figure skating career in style. The two-time world champ won team gold at the Pyeongchang Olympics and took bronze in the pairs with Eric Radford.

"Literally the day I finished competing, I retired," Duhamel said.

Zoey was just over four pounds at birth but her weight would drop to three pounds eight ounces.

"She had no health problems other than being small," Duhamel said. "We're very grateful for that. But we were not allowed to leave the hospital and she had to stay in the NICU until she could consistently gain weight. So we were there for a few weeks."

Duhamel was prepared to sleep in a chair by Zoey's side at Oakville Trafalgar Memorial Hospital. A nearby family room named in honour of a foundation donation provided a welcome alternative.

"It made the process of having my baby in the hospital for weeks a lot easier because I didn't have to go home at night and leave her there," she said. "I was always there with her. I really wish that every hospital had that."

The Sandra Schmirler Foundation has raised over $4.9 million for life-saving equipment in 61 neonatal intensive care units across Canada. It also provides scholarships to junior curlers.

Schmirler, who won curling gold at the 1998 Nagano Games, was 36 when she died from cancer in 2000. Her children were two years old and eight months old at the time.

The foundation telethon is a fixture of opening weekend at the Scotties Tournament of Hearts. After discovering the charity first-hand, Duhamel is hoping to raise awareness outside of curling circles.

"The time that parents and families have to spend when you have a baby in the neonatal intensive care unit is stressful, it's exhausting, it's trying times and it's not an experience that anybody should have to go through," she said. "But there are so many people that do have to go through it."

After retirement, the native of Lively, Ont., continued performing with Radford at "Stars on Ice" tours in Canada and Japan. She also kept busy with mini-tours and one-off performances.

Duhamel also started coaching at Skate Oakville near her hometown of Burlington, Ont.

"As a competitive athlete, your competitive nature doesn't just disappear," she said. "It doesn't leave you. You find different outlets for it, I would say."

Wolski, meanwhile, is supporting The Hospital for Sick Children's patient amenities fund. He played 451 career regular-season NHL games before retiring after the 2012-13 campaign.

Now in its sixth season, "Battle of the Blades" sees hockey players and figure skaters perform on-ice dance routines for judges. The winners get $100,000 in prize money to donate to charities of their choice.

He and Duhamel remain in the mix with one duo to be trimmed Thursday night ahead of the four-team finale.

Operations director Brenda Gallagher said it's the first time that the Sandra Schmirler Foundation has been selected as a charity by a competitor on the show.

"The awareness among Canadians is invaluable to us because we think we do really important work - saving babies' lives by offering this equipment - but not everybody knows about us," she said from Ottawa.

"So for Meagan to do this for us has been advertising that you just can't buy."

This report by The Canadian Press was first published Nov. 18, 2020.