LOS ANGELES — The video couldn’t have been simpler: A woman in her apartment, lip-syncing audio of President Donald Trump as he expounded on possible coronavirus treatments.
Dec 17, 2020 5:54 AM By: Canadian Press 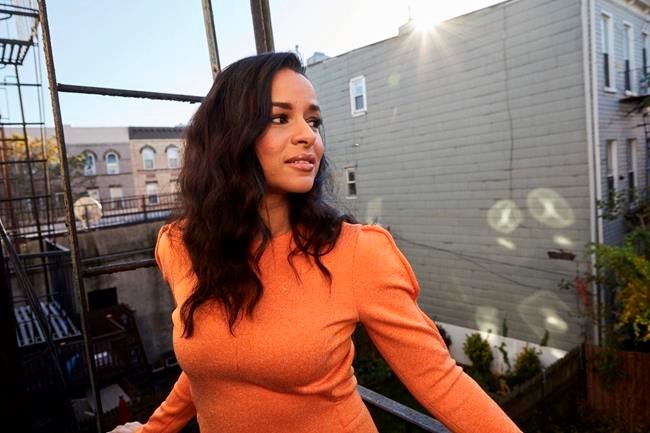 LOS ANGELES — The video couldn’t have been simpler: A woman in her apartment, lip-syncing audio of President Donald Trump as he expounded on possible coronavirus treatments.

“We hit the body with a tremendous — whether it's ultraviolet or just very powerful light,” Trump said at the time. “I see the disinfectant where it knocks it out in a minute. One minute. And is there a way we can do something like that by injection inside or almost a cleaning?"

“Six months ago I was in my living room making a TikTok,” Cooper recently told The Associated Press, which is naming her one of its Breakthrough Entertainers of 2020. “And then I’m on a golf course with, like, a dolly shot and a crew. And I’m lip-syncing the same guy that I’ve been lip-syncing, but I’m doing it in a whole different scale. And so at that moment, I had that moment of like, ‘Wow, this happened fast.’ You know? Like, breakneck speed.”

There’ve been so many pinch-me moments since Cooper’s first TikTok that she’s lost track. But she’ll never forget the feeling of having made it when she saw Jerry Seinfeld talking about why her videos were funny in an interview.

Rudolph said she first saw one of Cooper's videos after a friend sent it to her, “laughing hysterically, saying, ‘Isn’t this fantastic?’”

“I was just so impressed with just the natural joy of it,” Rudolph said. “I felt like she just clicked into this thing that was coming out of her so effortlessly that it was making all of us laugh.”

Cooper’s Netflix special, “Sarah Cooper: Everything’s Fine,” was the first project for Animal Pictures, Rudolph’s new production company that she started with actor Natasha Lyonne, known for her work in “Russian Doll” and “Orange Is the New Black."

“I was just like, ‘Who is this person? This is exactly articulating why everything is so insane,” Lyonne said of the first time she saw “How to Medical.” "It just resonated much harder than somebody being like, ‘Is he crazy or what?’”

Rudolph and Lyonne said green-lighting Cooper's special was a no-brainer.

“Sarah really epitomizes somebody whose voice and a sense of and talent we want to help bring to the world,” Rudolph said. “She had so much material to work with. It was really just a matter of helping her edit and then helping figure out how to bring these things to life and using all the experience that we had.”

It was clear Cooper was “ready for her moment," Lyonne said. "She knew it was her moment and she was not going to blow it ... Sarah just showed up and crushed.”

In addition to helping her land the Netflix special, Cooper's lip-syncing videos renewed interest in the books she's written, “100 Tricks to Appear Smart in Meetings” and “How to Be Successful Without Hurting Men’s Feelings.” The latter is being turned into a sitcom for CBS, which Cooper is currently writing with Cindy Chupack ("Sex and the City" and “Modern Family”).

All that success may appear to have happened overnight for Cooper, but the 42-year-old has been working on her comedy for years, even during her career in tech (She worked at Yahoo! and Google before quitting in 2014).

Now that Trump is on his way out of the Oval Office and her career is taking off, Cooper says the lip-syncing videos will be something she does “just for fun every once in a while.”

“Looking back in my career, I evolve. I want to do something different. And the second anything gets kind of stale, I don’t really want to do it anymore,” she said.

As for her success, it's something she's still processing.

“I’ve been keeping a journal just to write down, like, ‘Well this happened today. I talked to Ben Stiller today.’ You know, because it’s just so hard to comprehend," she said. “I think it’s something that in a few years, I’ll be able to look back and be like, ‘Wow, that all happened really fast.'”