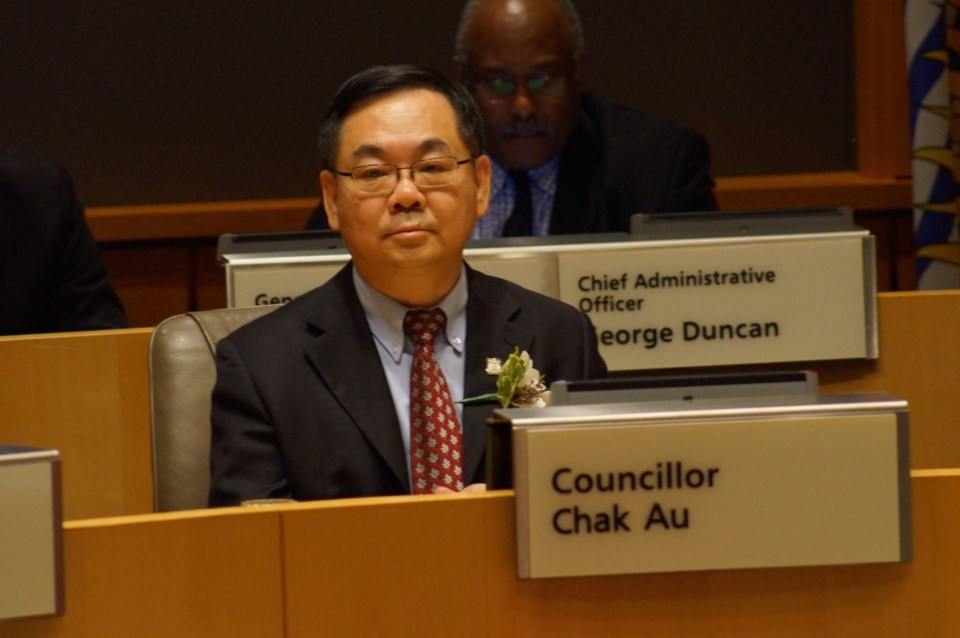 Last week, at a general purposes committee meeting followed by a special council meeting, council voted unanimously in favour of limiting farmland homes to 500 square metres with a home plate size of 1,000 square metres. However, on Tuesday, Coun. Chak Au proposed an amendment to limit home sizes to 400 square metres.

“It’s become obvious that what has been started has not been enough to protect our farmland. With the price of farmland still so inflated and it’s now out of reach for the young farmers who want to do farming in Richmond,” Au said during Tuesday’s council meeting.

“By allowing this kind of speculation to continue to happen, we are literally stealing farmland from our future generations…some people may argue that this is already too late. But hopefully, it will stop further damage (from being) done on our farmlands.”

On Wednesday morning, Steves told the Richmond News he was “still smiling” from council’s decision.

“Chak Au was superb, he told me he wanted to move the motion, we talked about it beforehand,” Steves said.

“He had a prepared presentation…he explained exactly why he changed his position and he ended up saying he asked his kids and his kids told him to do it. So what he was doing he was doing for the future generations.”

For Brodie, however the lowered limit was “excessive.”

“I believe that we have to support farmers,” Brodie told the News. “The people who own farms, the farmers, are not happy about going down to 500 square metres and I am sure they are far more unhappy about 400.”

Brodie added that he was in favour of all the other points in the bylaw, including limits to the home plate size.

Steves added that in Richmond, a 2017 city staff report stated the largest home in a residential zone was approximately 400 square metres, or around 4,200 square feet.

Wolfe, who also voted in favour of 400 square metres, was pleased that council was considering a lower limit.

“This is an issue that citizens of Richmond have been concerned about and really have been fed up that so little action has been taken at the municipal level,” he said.

Council’s pursuit of this bylaw coincidentally came on the heels of a provincial announcement with its own legislation limiting ALR home sizes. That announcement was made last Monday.

If passed, Bill 52 – or the agricultural land commission amendment, 2018 – will include “addressing mega-mansions and speculation in the ALR by limiting new house sizes to less than 500 square metres.” However, limits to home plate size were not included.

Applications will be accepted to the Agricultural Land Commission for exceptions to this limitation.

In Richmond, a moratorium is now in effect prohibiting applications for new developments under the old home size allowances of 10,764 square feet. The bylaw will now head to a public hearing for a final vote in December.

The Public Hearing on reducing #RichmondBC #MegaMansions in the #ALR to 400 sq. m. will be on Monday Dec. 17. The first vote was a skirmish. The final vote is at the Public Hearing. The real battle begins.