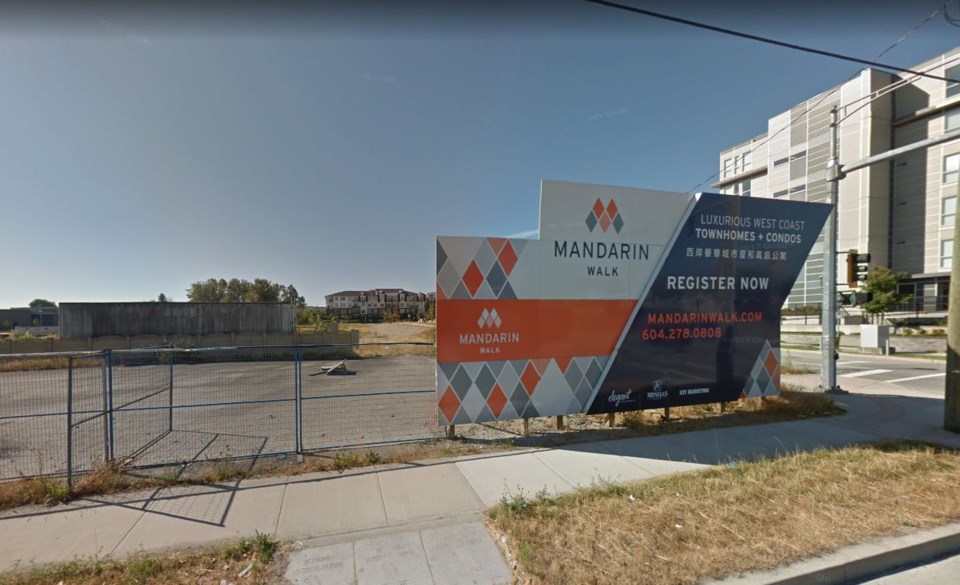 Mandarin Walk at Stolberg and Cambie failed to launch and left an investor using numbered companies to purchase 10 townhouses with a returned deposit.

A real estate speculator who used two numbered companies to purchase 10 “pre-sale” townhouse units in Richmond has failed in his bid to be compensated after the development, Mandarin Walk, went belly-up.

According to a B.C. Supreme Court ruling on March 2, Hon. Madam Justice Maisonville found no grounds to award Leung the $600,000 in damages he was asking from Minhas’ company.

In July 2015, Leung paid the initial deposits, which were held in trust. However, the court ordered the money be returned after May 2016 when foreclosure proceedings began because Minhas was unable to raise funds to build the development, located near the Cambie Fire Hall at No. 4 Road.

At issue was whether two memorandums of understanding (MOUs) were binding alongside the pre-sale contract. Leung claimed, per the MOUs, that his companies were owed $30,000 for each townhouse paid to each company. However, such details were not explicit in the MOUs. Minhas argued that the contracts were merely options to purchase the townhouses and that the plaintiff Leung was free to walk away within a prescribed period of time. Furthermore, the MOUs were not a part of the contracts.

Justice Maisonville agreed and ruled the MOUs did not validate Leung’s claim and dismissed it.

Pre-construction sales (“pre-sale”) contracts are a means for developers to raise funds to build housing units. They are purchased before construction and the investor, or future resident, is locked into said investment once construction begins. In the intervening years of permits and construction, the property’s equity may rise or fall. As such, pre-sales have been a popular mode of investment in Metro Vancouver’s hot real estate market.

Pre-sales in Richmond are also marketed heavily by development firms overseas, as B.C.’s foreign buyers’ tax (FBT) does not apply to such contracts until the property transfers are finalized (between this time the contracts (investment) can be flipped without the FBT being applied).

Mandarin Walk is still being marketed online as a collection of one to three bedroom townhouses and condos in “a master-planned urban village situated in the heart of Richmond.”