Voices column: Silence is a nasty form of bullying

It’s fitting that the week of Pink Shirt Day should kick off with a school board meeting where trustees — finally — voted to develop a policy to better educate staff and students about the LGBTQ community. Richmond was slow off the mark on this one.
Feb 23, 2017 4:29 PM By: Eve Edmonds 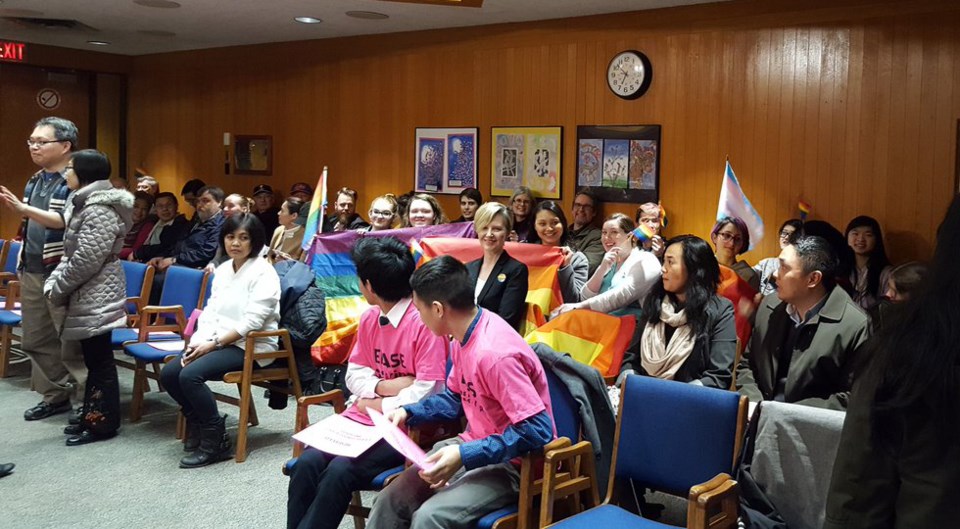 This week's Richmond School Board meeting (Feb.20) saw trustees vote 5-2 in favour of a SOGI/LGBT policy

It’s fitting that the week of Pink Shirt Day should kick off with a school board meeting where trustees — finally — voted to develop a policy to better educate staff and students about the LGBTQ community.

Richmond was slow off the mark on this one. In fact, ours is the only school district in the Lower Mainland, apart from Abbotsford,  that doesn’t have a code that specifically addresses discrimination based on sexual orientation and gender identity. Now we can say we’re inching up to Chilliwack when it comes to progressive policies.

Sarcasm aside, this was an important moment for some. I spoke to one of the teens who was at the meeting to support the policy. It was inspiring to see her sense of accomplishment. “We won; it was worth it.”

She was particularly impressed with the school superintendent, who, I’m told, delivered an eloquent and impassioned speech about why creating a policy is due. Knowing the Super’s got your back has got to go a long way for any student ­— especially one that doesn’t walk the mean line.

But what was an eye-opener for this teen was the fact there was also a powerful lobby opposing her right to be heard and valued as a gay person in her school community.

Among the rainbow flags and pink shirts was the Parents Care Group, who heckled in protest, some claiming such a policy will lead to perverts in school bathrooms.

“I’ve heard about this. I’ve heard that people say these things, but I’d never actually seen it before. McMath is pretty good. I’ve never experienced this kind of thing, personally.”

A gay teen goes through five years of high school in Richmond without encountering bullying or derision due to her sexual orientation — until she attends a school board meeting.

But the Parents Care Group have their sympathizers; trustees Jonathan Ho and Alice Wong voted against the motion.

Their argument is that the school district already has a policy against discrimination ­— of any kind. Why should the LGBTQ community get special treatment? The answer, of course, is that the LGBTQ community has already been singled out for “special treatment” in the form of abuse and oppression. Let’s remember why it’s called Pink Shirt Day ­— because a boy wore a pink shirt to school and was bullied for being gay.

I don’t believe these anti-policy folks want to see gay or transgender kids bullied, but nor do they want to see them fully accepted or their reality exposed or celebrated.

And to keep LGBTQ youth silenced and marginalized is far more damaging than stealing lunch money.