Letters: Leave wider spots for those who need them 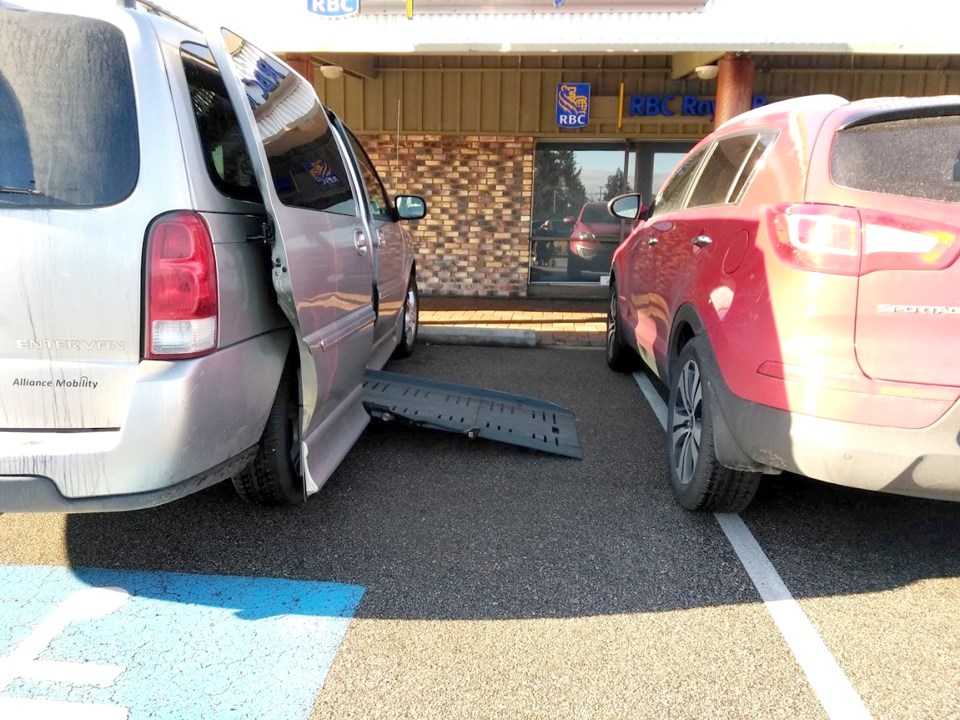 Curb cuts in the wrong place (left) or spaces that don’t leave enough room for side ramps can impede accessibility. Photo submitted

In the mid-1970s “handicapped” accessible parking spaces began to appear in the Lower Mainland to accommodate people who used wheelchairs and drove their own cars. As such, wider spaces were introduced in the BC Building Code and a decal, later a placard, was developed to identify a “qualified disabled driver.”

However, because these spaces were usually the closest to the door of a store or a mall, others with various conditions (a heart condition or amputated lower limb, for example) began advocating for their group to also be allowed to use them.

As such, criteria expanded and legitimate deal holders grew, but people using wheelchairs found it more and more difficult to find an empty accessible parking space.

Many individuals who use a wheelchair now drive a van with a side-loading ramp.

Once again we’ve had to advocate for changes to accessible parking space design because the existing spaces could not accommodate vans with side ramps.

Now, more municipalities are introducing enhanced accessible parking bylaws that include “van accessible” spaces, specially marked with added wording to show they are wider for vans with side ramps (or lifts).

The placement of these spaces can also be a barrier if parking lines are improperly marked, such as placing an accessible space directly in front of a curb cut or wheelchair let down (see left photo). Once a vehicle parks there, it makes the curb cut unusable for someone in a wheelchair.

People who must use a wheelchair often feel frustrated when they see someone with a legitimate placard pull into an accessible space and “walk” into the mall when there was an empty regular parking space right beside or close to the accessible one.

Having a placard doesn’t mean you have to park in an accessible space.

These spaces are also sometimes used to leave empty grocery carts in, creating another barrier. Signage is not maintained  ...more erosion of access.

Many municipalities have imposed fines for those abusing these spaces and some private developments have vehicles towed if they don’t have a valid placard.

It’s a well-known fact these placards are coveted, so much so counterfeit ones have been found displayed in vehicles.

The City of Richmond has recently enhanced its accessible parking bylaw to better reflect today’s needs for people with more severe disabilities. This includes “van accessible” spaces to accommodate side ramps and a more detailed description of what an accessible space must include.

This is National AccessAbility Week — May 30 to June 5 — and we ask citizens and residents keep in mind who these spaces are meant for, and respect that intent.

If you can, please leave the wider space for someone who truly needs it.