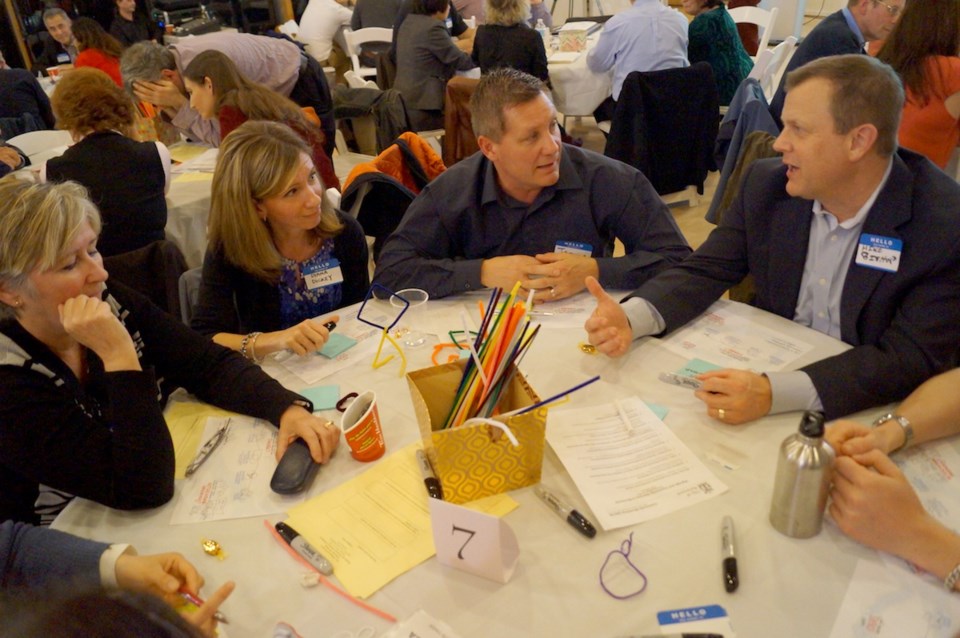 2014 council candidate Jerome Dickey, second from right, opposed a bylaw to make English mandatory. He stated education and inclusionary programs are the fix to Richmond's cultural disconnection. The table heard from the City of Richmond that an issue besides foreign language signs is "clutter" where banners and ads - most in Chinese - overtake actual signage. UBC Boathouse, March 12, 2015.

I would like to commend your reporters Graeme Wood and Alan Campbell for their column and stories in the Richmond News. It was very refreshing to read about the efforts of people such as Julia Chan, John Chow and Joanna Kato for making an earnest effort in learning to communicate in English.

This is the way to go.

Organizations such as the RCCS, SUCCESS and RMCS must be commended for these initiatives aimed at helping new Canadians, as well as longtime residents, learn English.

A common language is the bond that binds us all together as Canadians. It opens up so many doors and possibilities in addition to broadening one’s horizons.

There is an old saying that it is never too late to learn. These students are proving it to be true. Learning at least one of Canada’s official languages — French or English —should be every immigrant’s top priority.

As a matter of fact, learning as many languages as possible is a great asset. Rather than confining ourselves to our ethnic enclaves, we need to reach out and integrate. This is what Canada is all about. We should be proud of our heritage and mother tongue. However, at the same time, we must be equally proud of being Canadian.

Learning and communicating in at least one of Canada’s official languages is a great way to do that.