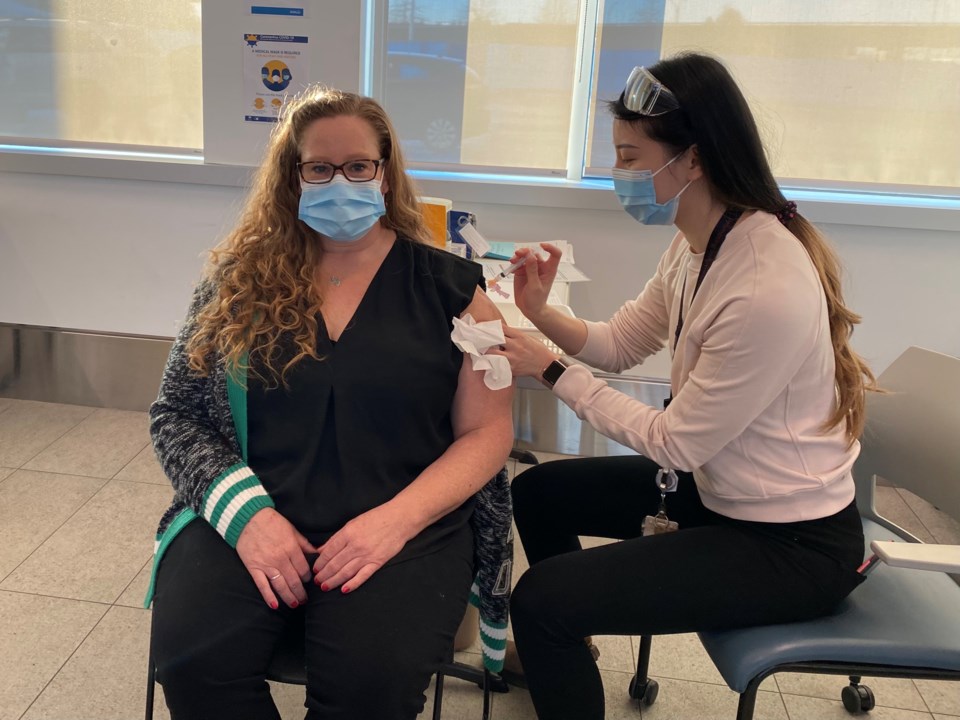 Jodie Jackman said she felt priviledge and excited to be the first one in line in Richmond to get vaccinated early Tuesday morning. Richmond News

I knew 2020 would be a great year. I just liked the sound of it. In other words, there’s good reason I don’t play the stock market — or read Tarot Cards.

But while 2020 has been anything but auspicious, it will be memorable and has given us much fodder for your annual Year in Review edition of the Richmond News.

Looking back, the year seemed to start OK. Actually, for us at the News, it was particularly encouraging as we saw a significant jump in our online traffic. But by month’s end, it was clear that part of our success had to do with an international health system failure.

The spectre of a coming pandemic loomed large, particularly here in Richmond. While it was business as usual in other communities, one of our biggest cultural events of the year was all but shut down.

The Aberdeen event had a much smaller crowd, temples limited visitors and restaurant owners fretted as they saw what is their Black Friday equivalent go bright red.

While there was a sense among some that given Richmond’s large Asian population and being home to an international airport, we would be one of the first communities to report cases.

Ironically, we were one of the last and our number of COVID-19 cases remains among the lowest in the Lower Mainland — thanks largely to our demographic, people who were listening closely to the news coming out of Wuhan, China, and adjusting their behaviour accordingly.

On Jan. 30, the first COVID-19 case was confirmed in B.C. Within weeks, malls were turned into ghost towns and the streets were ominously quiet. The first death in B.C. — on the North Shore — was announced March 9.

On March 12, the prime minister called for all non-essential travel to be halted, and ticket-holders were left scrambling to cancel flights and get their money back.

The airport had tumbleweeds blowing through it as 90 per cent of travel stopped.

When kids went on spring break, little did they know they wouldn’t see their teachers, classmates or schools until September.

On March 19, the City of Richmond declared a state of emergency and closed city hall to the public and had staff work from home — like many other businesses and organizations had started to do.

By mid-March, there were only three cases in Richmond, but when COVID-19 hit, it hit hard.

Warlito Valdez, 47, who worked at Richmond Society of Community Living, died suddenly from complications of COVID-19 in his home.

His relatively young age and the fact he was leaving behind a wife and young daughter made this case particularly heart-breaking.

But then there was the response.

Richmondite Pamela Sheaves, a stranger to the family, managed to get a pile of Valdez’ used T-shirts and began  sewing his daughter a quilt. Not only that, but Sheaves enlisted the help of other quilters, each stitching a portion of the larger project. So, not only was the quilt an ode to the memory of Valdez, it became a testament to the love of a community.

For me, this story epitomizes much of what we’ve seen in this pandemic: heartbreak and compassion, financial ruin and innovation; political missteps and solutions.

I’m glad to see the back of 2020, but I also believe it gave us opportunities to grow in ways we couldn’t imagine.

My wish for the New Year is that we learn from the teachings that were forced upon us, have faith in human kindness and radically expand our belief in the possible.