Occasionally, when I pass the temporary modular housing on Alderbridge Way, I see something that puts a smile on my face. I see people sitting outside on the steps, talking with one another. It’s an unusual sight nowadays.
Nov 9, 2019 1:00 PM By: Sabine Eiche 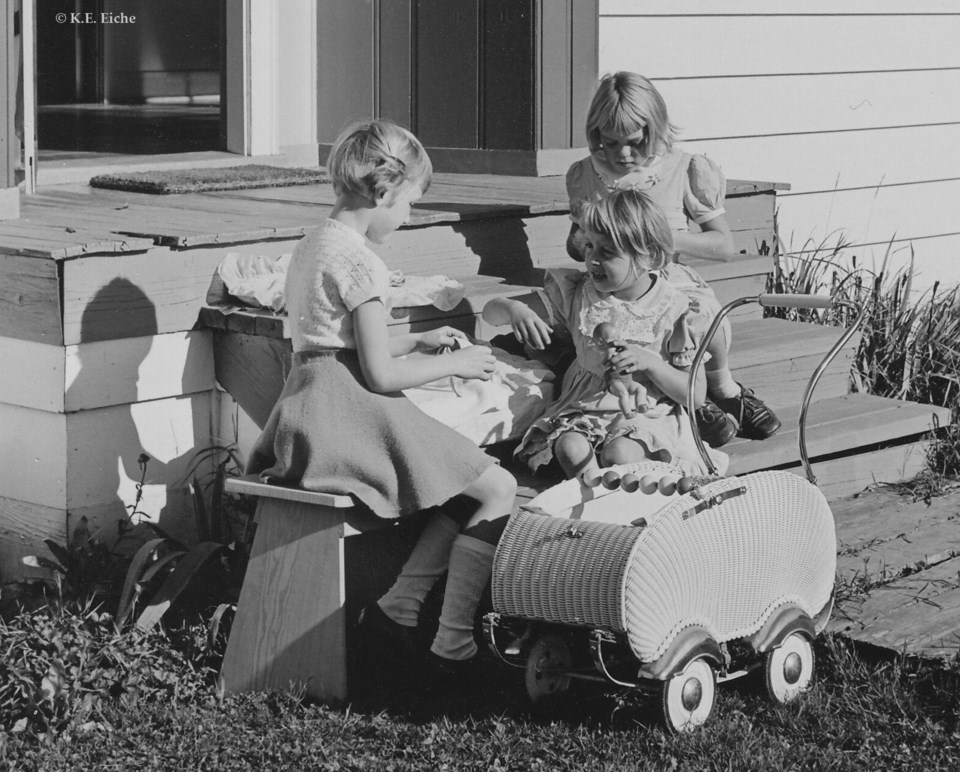 Two little girls from the Burkeville neighbourhood join me to play with my dolls in October 1956, a fortnight after my mother and I arrived in Canada. Photo: © K.E. Eiche.

Occasionally, when I pass the temporary modular housing on Alderbridge Way, I see something that puts a smile on my face. I see people sitting outside on the steps, talking with one another. It’s an unusual sight nowadays. For me, it speaks of neighbourliness.

Several highrises are located across the street from the modular housing. I keep hoping to see people sitting on the balconies of their apartments, to greet neighbours or pass the time of day, but everyone seems to hide inside. Elsewhere in Richmond, where the number of older houses is close to being surpassed by the number of monster mansions, with their rigid fences and gates shouting “No trespassing,” I despair of ever seeing a living soul out of doors.

Interestingly, in this part of the world we’d traditionally spend a good amount of time in the fresh air while we were at home. A hundred or so years ago many of the houses in Richmond and Vancouver were built with a front porch and steps leading up to it. Not many of these houses survive in Richmond (London farmhouse is one of the few), but several still exist in Vancouver. People sat on their porches or on the steps to socialize with friends and neighbours, to watch children playing or to see who was walking or driving by. Entertainment was simpler, cheaper, and not dependent on technology. It didn’t suffer from power failures or malfunctioning devices. It was largely “do-it-yourself.” And it didn’t isolate people, it brought them closer together, because it involved everyone.

There’s another advantage to sitting outside – daylight is better than artificial light for reading and doing fine work. If you’ve ever been to some of the small towns and villages in Italy, especially in the south, you’ll have seen groups of women sitting on chairs, in the street outside their houses, making lace or embroidering, while chatting incessantly. The light inside those houses is poor and the quarters cramped. Anyway, handicraft work is more fun when you do it in a group.

Steps (from an Old English word suggesting foothold) orginated as an architectural form to facilitate climbing from one level to another, but their shape and size was soon found to be ideal also for sitting (think of the ancient theatre in Epidaurus, Greece, with its semicircle of stone seats). Steps are more stable than chairs because they’re unlikely to tip over, and if long enough, steps can also function as a handy sort of side table.

My parents knew it was important that I make friends as soon as possible after my mother and I arrived in Canada, in October 1956. It didn’t take long. The steps of our Burkeville house were the ideal playground. The little girls in the neighbourhood came, curious to see what my German dolls and doll-buggy were like. It didn’t matter that I was an immigrant child who spoke no English – we communicated through play and make-believe, on the steps, in the open air.