Column: What is decanting wine about? 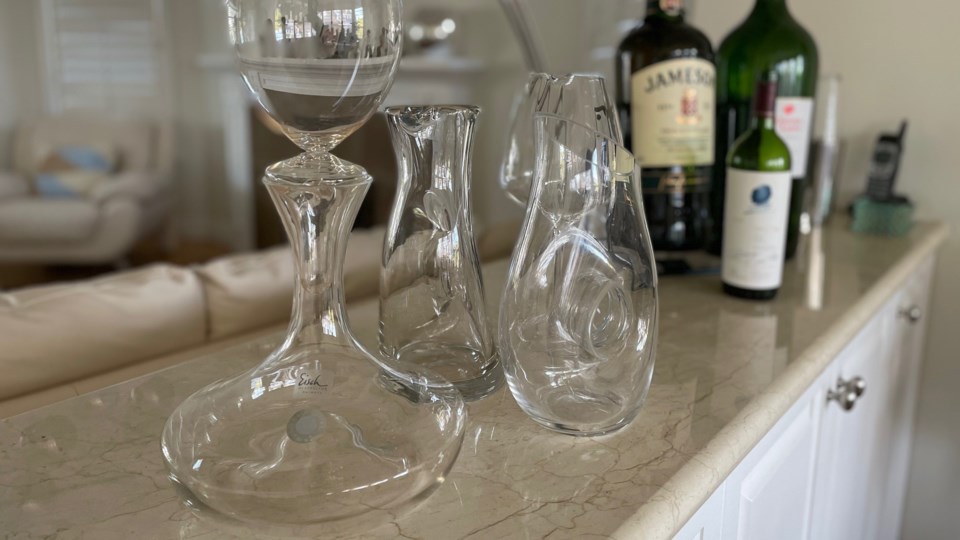 Decanters come in all sizes, shapes and price rangesTony Kwan

Decanting a wine or “letting a wine breathe” is simply the process of opening a bottle of wine and pouring the wine into a decanter to give the wine some oxygen.  The idea behind decanting is that it allows unpleasant gases or aromas that have developed in the bottle to be eliminated.  For red wines, the interaction with oxygen also softens the tannins in the wine. It’s like how uncomfortable you get after being cramped in a confined space for a long time – you feel much better after “getting some air.”

Opening a bottle of wine and leaving it open for a few hours is not a very effective manner of decanting, as very little oxygen will interact with the wine through the small opening of the bottle.  Decanters come in all types of shapes, sizes and prices.  My favourite decanters are easy to handle, pour well and allow for the wine to sit with a large surface area being exposed to the air so that the wine can interact with the oxygen in the air.

Here are some general rules on decanting that I hope you will find useful:

Sparkling wine is generally not decanted as this will reduce the effervescence or “bubbles”, which will be removed at a faster rate when decanted.  However, champagne houses like Billlecart Salmon actually recommend that you decant their young vintage champagnes to bring out the taste of the wine.

It is uncommon to decant white wines, mostly because white wines need to be served chilled, and it is difficult to keep a decanter cold.  For lighter wines, aromas might dissipate quickly if the wine is decanted.  However, decanting may be beneficial for better quality white wines (which are normally served closer to room temperature), or very young Chardonnay-based or heavier white wines.  Decanting just before you serve a white wine should give the wine sufficient aeration.

In general, almost every red will benefit from decanting.  Decanting removes sediment (that has developed with extended aging) or impurities (such as part of the cork or foil that might have dropped into the bottle when opening the wine).

Very old red wines and young, light red wines made from Gamay or Pinot Noir grapes can be decanted right before serving.  For all other red wines, you should decant for a more extended period.  You can decide how long to decant a red wine based on three factors – the age, the type and the quality of the wine.

In general, you should decant a younger wine longer than an older wine. Wines with high alcohol content, wines from certain regions (like Bordeaux), and wines made with certain grape types (Cabernet Sauvignon, Zinfandel) need more aeration.  Also, the better the quality of the wine, the longer you generally need to aerate the wine.

How long to decant a wine is ultimately based on past experiences and personal preference.  For most wines, I like to decant the wine for 1-2 hours before I serve them to let the wine evolve slowly.

This week’s recommendation is a wine that will need two to three hours in a decanter before serving. Chapoutier 2016 Crozes Hermitage Les Meysonniers is a wonderful Northern Rhone wine made with the Syrah grape. It’s well priced at $29.99.  For more information on this wine, please see my YouTube video reviewing this wine.  Until next time, happy drinking!

Work, money matters continuing to keep Canadians awake at night
May 10, 2021 6:00 AM
Comments