In a bid to strike something off his bucket list, reporter Alan Campbell enlisted the help of Yolanda Blommers, of Blue Meadow Farm , to learn how to ride a horse.
Nov 9, 2018 7:00 PM By: Alan Campbell 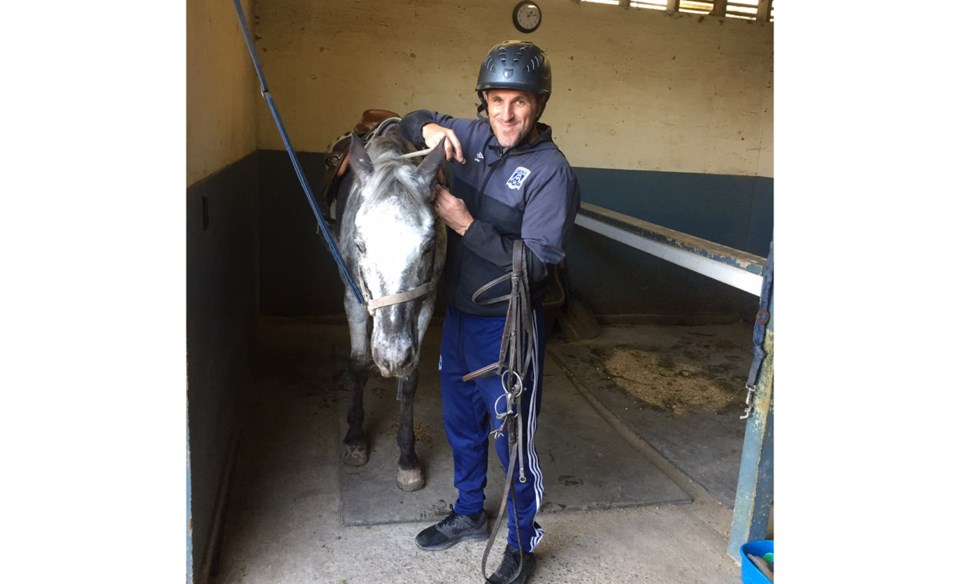 Getting Yetter’s halter off was easier than putting it on.

Blink and you’d have missed it.

It was but a fleeting few strides, but guess who cantered for the first time this week?

Just in case the obvious evades you…it was me — on only my fifth riding lesson, no less.

An hour earlier, newsroom colleague and accomplished rider Megan suggested I’d be cantering one day. Turns out, it was today.

For the uninitiated, the canter is the third gear, after walking and trotting.

After explaining what my hands, legs and feet should be doing (and might be feeling) when the canter kicks in, instructor Yolanda talked about “how to sit in balance” and “go with the motion of the horse.”

She then gave me the go-ahead to give Yetter “the signal” with my left foot (a squeeze with the inside foot, while pulling the outside one back a few inches).

In the first go, I lunged back and forth like a rag doll on a rocking horse.

These are great lesson horses at Blue Meadow, however, and if my weight went too far forward or back, Yetter would sense there’s an issue and quickly throttle down.

Yolanda suggested going one-handed on the reins, with the other hand gripping under the front of the saddle to help me feel and resist the forward motion a little.

Like most of Yolanda’s words of wisdom, it worked like a charm and there I was, for a brief few strides in a small circle, cantering.

I am allowed to say it felt easier than the sitting and posting trots? (Maybe I’ve yet to earn that right. Who knows?)

But it absolutely did. There. I said it. Shoot me. It felt more natural than anything I’d learned thus far and it felt wonderful.

During the canter itself, I wasn’t really sure what to do to be honest. Should I sit, stand?

Yolanda said it didn’t matter too much at this stage. It was more important to simply get a feel of a horse in more motion.

What did it feel like? It felt like a giant machine coming to life underneath me. I was grinning like a Cheshire cat and was so pleased with myself that I had to get Yolanda to repeat the next instructions. Her mouth was moving, but I wasn’t listening.

She was going to film the canter, but as it was my first, she didn’t want to put too much pressure on. And I’m not sure the iPhone 6 can take two-second videos…

Earlier, on arrival at the stables, I checked the whiteboard, to see I was on Yetter again.

I went to the horses’ lockers to fetch his saddle and tack, before heading to the cross-ties, where I noticed he was out in the paddock.

Should I go get him and bring him in? Instructor Jenny asked if I could bring Yetter in. Sure, how hard can that be?

I’d been shown this a few times already. But it’s a bit like the person who never drives and then, when finally behind the wheel, has no idea which route to take, despite being the passenger on the same journey 101 times.

Jenny came to my rescue to save my blushes.

At the cross-ties, for the first time I dug the muck out of his hooves with the pick, with a great deal of trepidation. Do NOT crouch down. I did it and, quite rightly, got told off.

Yolanda demonstrated once more how to put the bridle on, doing the “little hug” with the right shoulder and, using my left hand, placing Yetter’s snaffle bit near his mouth, while pressing my left thumb into the corner of his mouth to open his teeth apart.

Before the next lesson, I’m definitely going to Google all of this, I’m determined to do it myself, without the help of Yolanda…or Yetter.