Column: The shape of the world

Recently, I was sitting in a full bus heading for UBC. Only two people on the bus were not staring into a flat, rectangular device held in their hand. I was one. The driver was the other.
Oct 12, 2019 3:13 PM By: Sabine Eiche 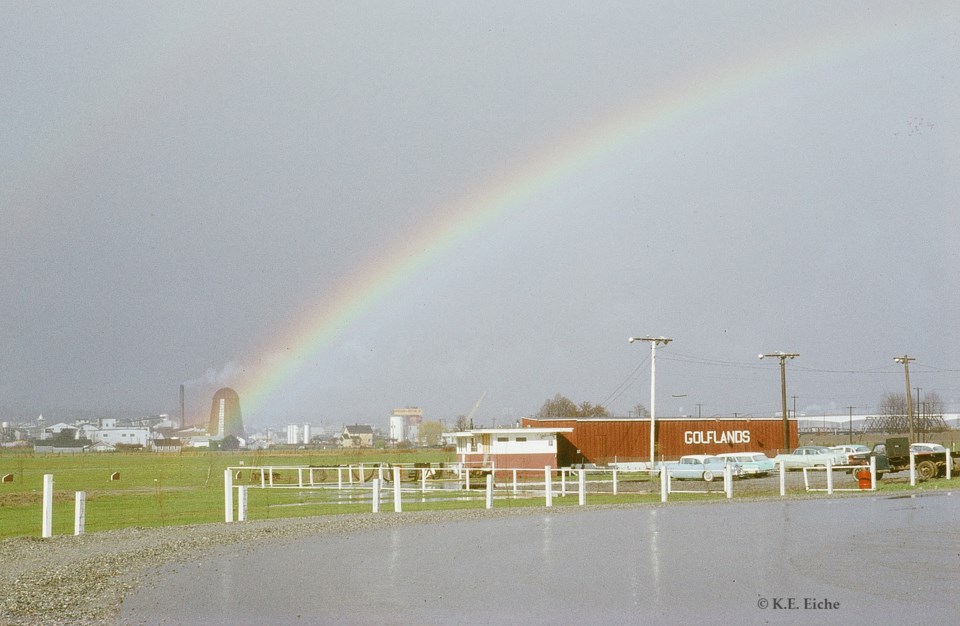 Golflands, a Par 3, 9-hole pitch course on Sea Island, owned by Al Gleeson, was located at the corner of Miller Road and Airport Road. Visible on this photo, taken in the late 1950s, are the Eburne Sawmill at left, Gus Grauer’s yellow farmhouse on Grauer Road, and the steel girders of the Eburne Bridge swing span in front of the Oak Street Bridge (thanks to Doug Eastman of the Sea Island Heritage Society for providing information about the site). Photo: © K.E.Eiche.

Recently, I was sitting in a full bus heading for UBC. Only two people on the bus were not staring into a flat, rectangular device held in their hand. I was one. The driver was the other. It was a glorious day, a rarity this past September, and the scenery streaming past me through the window was a balm for the eyes – streets lined with handsome houses, some very old, and magnificent trees still in full-leaf, everything against a backdrop of massive clouds ramming into the North Shore mountains. Should I assume that all the other passengers were watching an even more satisfying spectacle on their hand-held devices? Could it be that they were reading breaking news of such importance that it had the potential to change their lives in an instant? Or were they texting a friend with the answer they’d just discovered to the greatest riddle in the universe? Somehow, I think the answer to all three questions is “No.”

If they’d only raise their eyes 45 degrees upwards, they’d have a direct view of the actual world, of things happening in real time, everything visible on a screen way bigger than any that could ever be manufactured.

And there’s lots to take note of in the real world, with no time to lose. Our landscape is changing right under our noses. Familiar views are gradually disappearing, until one day the realization hits us – things look completely different. A friend who used to live in Richmond but moved to Vancouver gets lost every time she drives over the river because all the old landmarks are gone. When I lived in Florence I often wondered, if Leonardo da Vinci or Michelangelo were to come back now, would they recognize where they were? I’m sure they would. Michelangelo could materialize today, walk down the Florentine street where I used to live, and see the very windows that he’d designed for a palazzo 500 years earlier. And here in Richmond – I increasingly feel as if I’ve wandered into an unknown town, where I recognize nothing.

Of course, our architecture will never enjoy a life span like that in Italy, but it’s important to pay attention to what we have that’s worth preserving – whether it’s for environmental or economic reasons, or because it’s part of our heritage. Respecting and learning about our heritage, about what was here before, can help strengthen our sense of belonging to a place, of being a vital part of a community. It’s called civic pride.

Paying attention to what’s around us – what’s coming and going – means connecting with the real world. In ancient times people believed the world was flat, like a disc. It occurred to me that they weren’t wrong, they were prophetic (from the Greek “prophetes,” spokesman). What they did get wrong was the shape – the world isn’t circular, it's rectangular. At least, that’s the shape of the world so many people now dwell in. An upward tilt of the head can change all that.