“What do you do with that?” a woman at the green grocer asked, pointing to something in my basket. “That’s fennel, misidentified as anise,” I answered, and then proceeded to tell her what I do with it.
Jul 6, 2019 11:30 AM By: Sabine Eiche 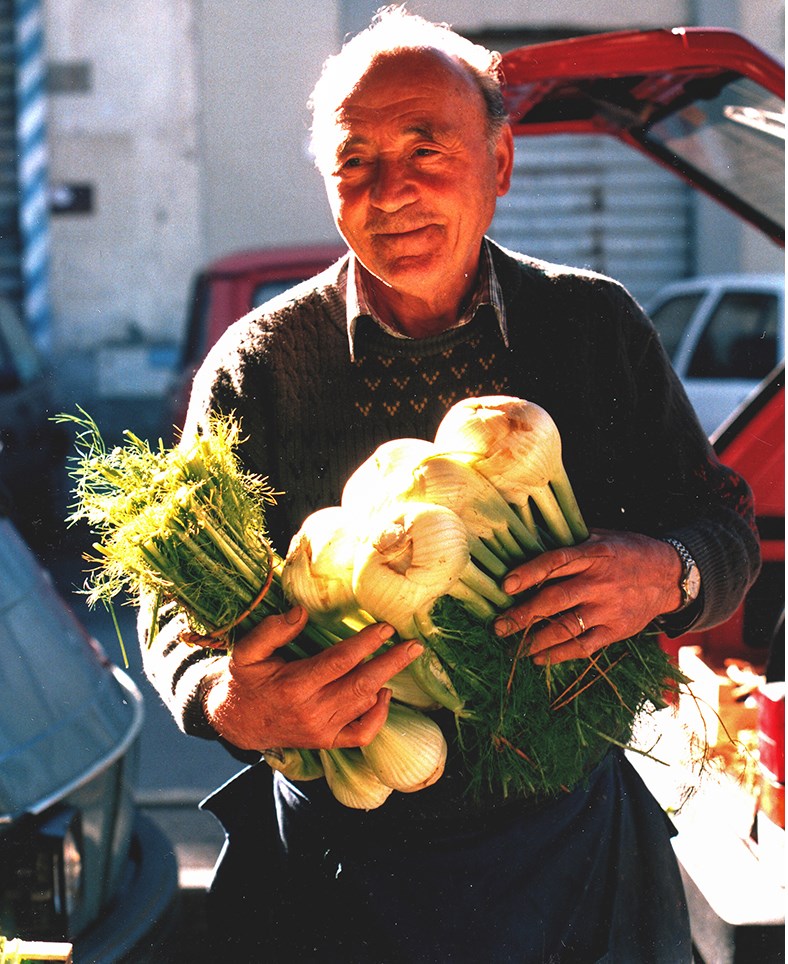 A farmer with an armful of "male" fennel at the Sant’Ambrogio market in Florence. Photo: S. Eiche

“What do you do with that?” a woman at the green grocer asked, pointing to something in my basket.

“That’s fennel, misidentified as anise,” I answered, and then proceeded to tell her what I do with it.

Fennel came into my life when I lived in Italy, where the white and green bulbs of the herb Foeniculum vulgare, commonly called fennel, start appearing at the markets in spring. I didn’t know what to do with fennel when I first saw it, but the friendly farmers quickly enlightened me. They also told me that fennel bulbs were categorized as either male or female, according to their shape – the males were short and bulbous, the females long and slim. Males were juicier and more tender, better for eating raw; females were stringier, better for cooking and baking. The distinction male-female is probably unofficial, but it’s true that the male is better than the female in salads.

I’ve tried growing fennel here in my garden, but without success. The bulbs remain tiny and they certainly don’t get bulbous. So I rely on the green grocer for my supply. It’s not an ideal arrangement because the fennel is usually imported from down south and arrives here in a state of exhaustion. It also costs an arm and a leg.

Consequently, I’ve invented ways to use every last bit of the fennel, including the outer leaves, which in Italy I’d have composted. I clean the outer leaves and, having removed all blemishes, cut them into thin strips which I toss into a pan with some olive oil and sea salt. I let them get a bit brown and then I cover the pan with a lid so that the steam will thoroughly soften them.

Sautéed fennel is delicious hot or at room temperature, and recently I’ve been partnering it with baked fish, specifically haddock. I pour a little olive oil into a Pyrex dish, add sautéed fennel to make a bed for the haddock and then bake it for 15 minutes at 350 F. When it’s out of the oven, I spoon some more sautéed fennel over the fish. It’s exquisitely delicious.

There’s widespread confusion here between fennel and anise, and although the two are related (both belong to the carrot family), they’re quite different in many ways. Fennel is grown for the bulb; anise, similar in appearance to dill, is grown for its intensely aromatic and flavourful seeds.

When fennel flowers it, too, makes seeds, which are the basis of fennel tea (which aids the digestion). In my failed attempts to grow fennel, I ended up with lots of unused seeds. Determined to find a way to make good use of them, I hit upon a brilliant idea – get a pepper mill and grind the seeds (even those long past their expiry date). Ground fennel seeds add an extraordinary flavour to potato salad and both raw and cooked tomatoes and bring the spirit of the Mediterranean into my kitchen. Best of all, nothing’s been wasted.