Column: The alternative tree and its ornaments

In 2015, I came up with an alternative to the traditional Christmas tree – a tall tomato cage decorated with all our Christmas ornaments.
Dec 21, 2019 1:00 PM By: Sabine Eiche 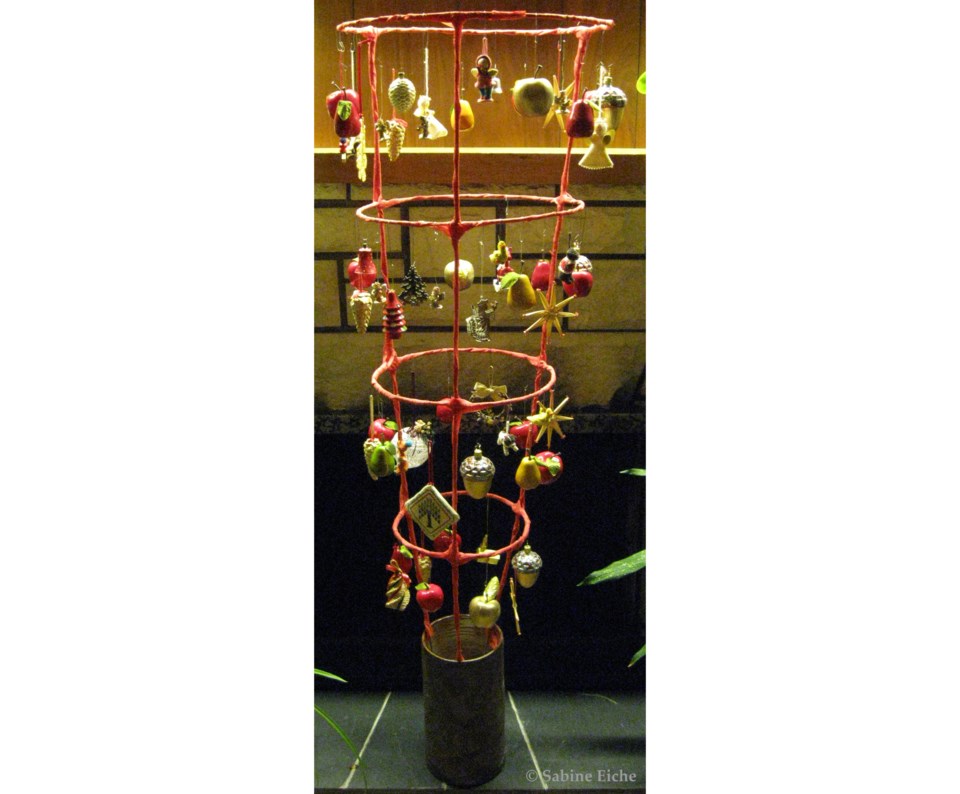 In 2015, I came up with an alternative to the traditional Christmas tree – a tall tomato cage decorated with all our Christmas ornaments. This year, I’ve dreamt up another alternative – an imaginary tree, pictured in my mind, decorated not with the usual ornaments but with five memorable scenes I witnessed these past months – little nature cameos, which I describe as follow.

An agitated crow kept swooping around a neighbour’s tall evergreen. Eventually the cause of the crow’s agitation emerged and flew to the top of the tree. It was a hawk. After staying there for a minute, with the crow still cawing insistently, the hawk pushed off in an unhurried way. I imagined him saying, “Okay, okay, keep your feathers on ...”

Because Anna’s hummingbirds are fiercely territorial, I have four feeders (each with four ports) for the two hummingbirds that are my “regulars.” Yet on a couple of occasions recently I’ve seen them together at the same feeder, side by side, drinking like two pals at the bar on a Saturday evening.

I was standing near the hummingbird saucer-feeder when the male Anna’s landed and was about to take a sip. A second later a chickadee arrived and actually stuck its beak into one of the feeding ports! The hummingbird backed off but hovered in mid air, watching the intruder. The chickadee stuck its beak in two more times, and I swear it smacked its lips when it lifted its head.

There was a tiny spider swimming on top of the nectar in the hummingbird bottle-feeder. The hummingbird was in no danger of encountering the spider since it was at the top, so I let it be, figuring it would probably die very soon. Days later, taking the feeder apart to clean it, I poured out the remaining nectar – and with it came the spider, all curled up. I scooped it up so it wouldn’t get stuck in the sink’s mesh strainer. Suddenly the spider moved! I carried it into the garden, where it probably regaled its spider cronies with tales of rare adventures in a bottle full of a weird, intoxicating elixir.

Rain started coming down in sheets. Birds pecking seeds on the driveway fled to safety. Watching out the window, I saw something on the street that appeared to be a leaf, but not moving in spite of wind and rain. A couple of minutes later the ‘leaf’ still hadn’t stirred. Looking through binoculars I discovered it wasn’t a leaf, but a junco – and right in the middle of the street, as still as a statue. It would be run over, for sure, I thought. Nobody would see it in this weather. I ran out into the street. The bird didn’t move. As I slowly lowered my cupped hands, it hopped away. The junco was alive after all! I hopped in pursuit. Then I cupped my hands around it for a second try – it  stayed inside. What a fragile creature I was able to carry to safety.