Column: Out with the old trash, in with the new

Do you think we’re going to win the war against plastic waste and environmental pollution? Last year I thought we were. This year I’m no longer sure. We might be winning a few battles, but not the war. Not yet, anyway.
Sep 26, 2020 1:00 PM By: Sabine Eiche 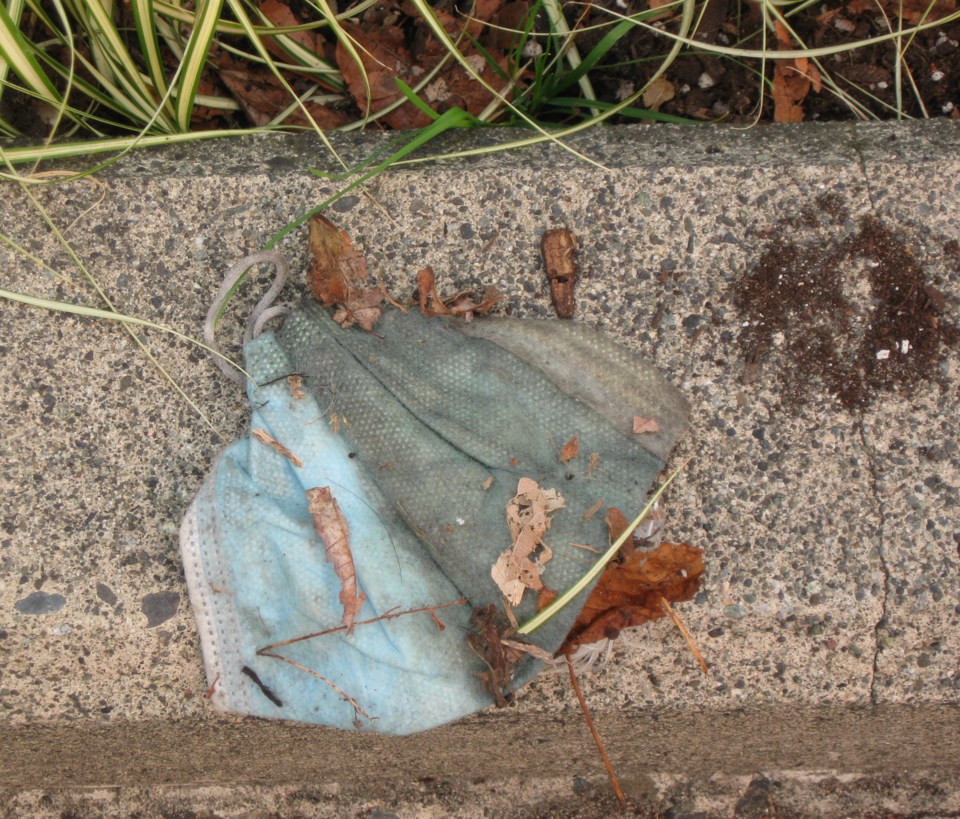 Masks discarded along Westminster Highway, across from Richmond Centre, as seen on 17 September 2020. Photo: Sabine Eiche

Do you think we’re going to win the war against plastic waste and environmental pollution? Last year I thought we were. This year I’m no longer sure. We might be winning a few battles, but not the war. Not yet, anyway.

In 2019 Richmond tried to ban single-use plastics but was stopped by the BC Supreme Court. This summer it got provincial approval for the ban. Battle won!

For years conscientious citizens had been shopping with their own reusable bags, but when Covid-19 was declared a pandemic, such bags were not allowed to enter the store. The plastics industry was overjoyed. However, the restriction was soon lifted. Battle won!

Recycling isn’t working as well as the authorities would like us to think. The Asian countries that once took most of North America’s recyclables to turn them into shoes, purses and other products now restrict what they take. Battle we’re probably losing.

Avantium, a bioplastics company in the Netherlands, is working on a project to replace fossil fuel plastic bottles with bottles made from a plastic using sugars from corn, wheat or beets. These would decompose much faster than the ones we’re currently using. They aim to have the eco-friendly bottles out by 2023. Battle we’re probably winning!

The pandemic is overturning our ‘old’ normal way of life and the ‘new’ normal has many problems. One concerns masks. Health officials recommend we wear them, and many of us are listening to their advice. If worried about costs and the environment, we sew masks out of fabric, which can be washed and reused countless times. Commercially-produced masks (reusable or disposable) are available in stores and online, though they’re not cheap. Therefore, a Taiwanese supermarket’s donation of 10,000 disposable masks to the Richmond School District will have been welcome. But the disposal of the disposable masks is causing an unwelcome complication. Some people don’t care where they land when they toss them out. Many single-use masks are made from polypropelene, derived from fossil fuels. No matter how they’re disposed of, they’ll take centuries to decompose. Battle we’re probably losing.

However, UBC’s BioProducts Institute is designing a new N95 type of mask that won’t harm the environment. One prototype has a mask frame made from BC wood fibres and a filter made with wood-based products. These masks are fully compostable and biodegradable. Battle we’re probably winning!

I’m not a scientist. I can’t invent an alternative to the plastics polluting our planet. But I do have a suggestion. We’re running out of landfills, so why not pick a planet somewhere in the universe and send all our rubbish there via spaceship? Elon Musk, are you listening? We could name the planet after the Latin for trash – “trump.” Oops, I mean “quisquiliae.”