Column: Horsing Around in Richmond (part 8) 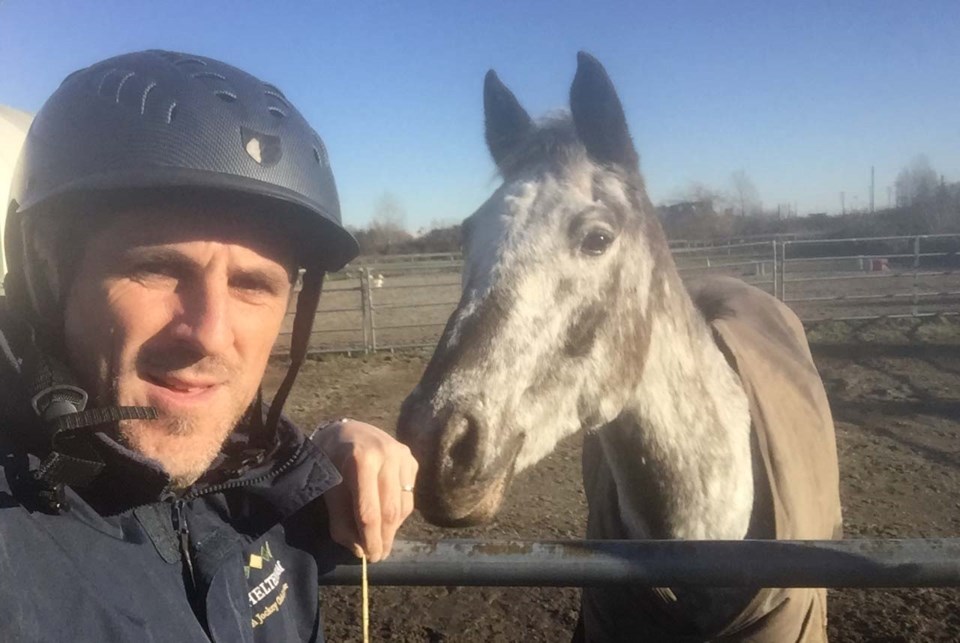 Reporter Alan Campbell (left) and Yetter are back on 'speaking' terms, despite him taking 15 minutes to get the bit into the horse's mouth. Alan Campbell selfie

IF someone grabbed your head and tried to place a four-inch long metal rod in your mouth, you wouldn’t like it, right?

So it’s no surprise that Yetter, my trusted lesson horse, wasn’t exactly champing at the bit (pun very much intended) to have an integral part of the tack placed in his gums.

It’s funny how it looks so simple when someone else is guiding you through it.

I’d gotten to Blue Meadow super early, given that I really wanted to bring Yetter in from the paddock and “dress” him with his saddle and bridle, without any outside help.

I led him back to the saddling enclosure without any hiccups. So far, so good.

Off came his winter blanket and I started cleaning the compacted muck out of his hooves.

On seven previous lessons, I’d somehow been lucky that, while cleaning Yetter’s rear hooves — with your face pretty much level with his back passage — he hadn’t so much as broken wind. Yea, well, that run of good fortune ended Monday.

Suffice to say, that particular hoof enjoyed the quickest cleanout in equine history.

On went his numerous pads and blankets, then the saddle and his girth.

So far so good. But I totally forgot the martingale strap always goes on first.

It’s OK, though. I just need to unfasten the girth and slip the martingale through.

But wait, what end of it goes where? I’ve done this before! No matter which way I turned it, the strap didn’t look right. The clock was ticking. Sod it. Google it. And...we’re in.

Now for the acid test — getting the bit in.

I must have tried about 30 times in 10 minutes, but I couldn’t get him to take the bit. I even had my thumb wedged in his gum, like I was shown, to get him to open his mouth.

He was trying, the good old soul that he is, it wasn’t his fault. And he kept turning his head towards me, as if to say “are you for real?” or words to that effect.

I’m not entirely sure how it happened, but he finally took it and off we went.

Job done. Better late than never and another mini-milestone chalked up.

Yolanda was out of town, so I was in the trusted care of Jenny.

I had to postpone last week’s lesson, due to a pulled calf playing soccer, so Jenny had me practicing trotting diagonally in the arena.

Then, using letters placed around the arena, posting the trot through a serpentine (snake) route, via cones in the centre of the arena.

I think I was doing a good job keeping Yetter on the trot (no mean feat at the best of times), and then looking ahead to the turns that were needed and leading the horse subtly with your hands into the turns.

What we were looking for were smooth, round turns and have Yetter lined up as straight as possible before the cones.

All of that while keeping my heels down and weight on the balls of my feet.

I also practiced standing up in the stirrups while grabbing onto Yetter’s mane, trying to avoid tipping forward when my heels inevitably came up.

Only a couple more lessons to go and I’ve still to reach my last two plot points in my journey, cantering for a full circuit and taking on a small jump.