Column: Horsing Around in Richmond (part 6)

In a bid to strike something off his bucket list, reporter Alan Campbell enlisted the help of Yolanda Blommers, of Blue Meadow Farm , to learn how to ride a horse.
Nov 16, 2018 7:00 PM By: Alan Campbell 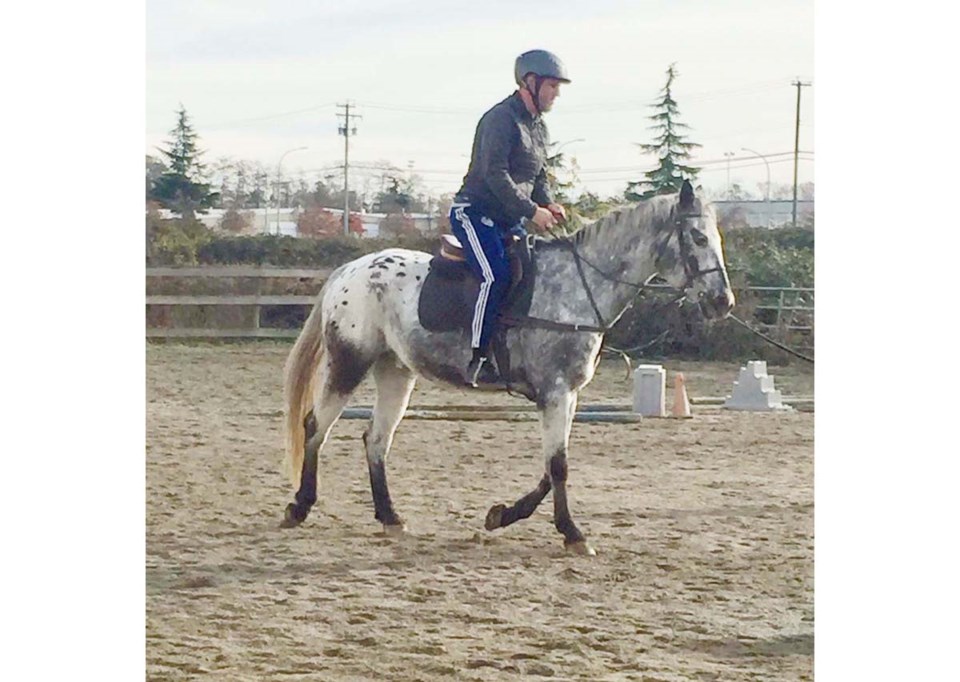 Going through his posting and trotting practices wasn’t easy for reporter Alan Campbell, under the watchful eyes of his wife and son for the first time.

I'M usually at my best when under pressure.

Whether it’s the clock ticking during multiple deadlines or teeing off on the first hole in front of 40 rowdy “mates” who’re dying for an “epic fail,” more often than not, I soak it up and perform.

So when I had an audience for the first time during my six-week journey into learning to ride a horse, it shouldn’t have presented any problems.

Due to Monday being a holiday, my wife and 16-year-old son came along to check out the horses and to see if I really did canter the week before, or if it was, as Mr. Trump would say, “fake news.”

And although there was nothing remotely resembling the aforementioned “epic fail,” it was slightly distracting to see, out of the corner of my eye, the pair of them smiling as I trotted ponderously around on my lesson horse, Yetter.

I’m not sure what they made of their middle-aged husband/dad bobbing up and down in the saddle and looking like the proverbial fish out of water?

Afterwards, they commented that I looked “very natural” on horseback — but what else are they going to say?

Fortunately, they did see a canter, of sorts, albeit briefer than the very brief, inaugural ones the week before.

During the lesson, this time with instructor Jenny, I was certain I’d broke into at least a couple of cantering strides with Yetter.

On reflection, via my wife’s far too long video, it was more like half a stride.

In my defense, where last week I was on the lunge-line being held by instructor Yolanda, this time Jenny set me off on my own, going “large” around the outdoor arena.

And, unlike the previous lesson where Yolanda was at close quarters to “encourage” Yetter to break into a canter, any gear shift from a trot on Yetter had to come from me and me alone.

The trick, as told previously, is to slide your outside foot back slightly, all while bumping your inside heel into the horse.

Suffice to say, keeping the horse on the trot (with the occasional tap behind the saddle with the riding crop), while giving him “signal” to canter and making sure you don’t lurch forward, is easier said than done.

But, as it did last week, it was incredibly satisfying to realize I had achieved most of it under my own steam.

In the same vein, I’m getting ever so close to learning how to halter, saddle and tack a horse on my own.

After last week’s debacle, I snapped a photo of what the halter (informal bridle) looked like on Yetter’s head, so I would know what to do this week when bringing him in from his paddock.

I almost got it, before one of the stable staff, Jenna, gave me a little help, knowing that my lesson was due to start soon.

Same goes for putting on his saddle and bridle. Without Jenna, I fear the saddle may have gone on backwards, which would have made for a more interesting update than my latest canter!

However, given more time – I need to get to my lesson earlier – I think I could figure out where exactly the saddle pads, girth, throat and nose latches, bit and Martingale all go…and in which order, all while making sure Yetter is safely cross-tied.

I did clean Yetter’s shoes all by myself, though, mastering the art of not crouching down and running your hand down the horse’s leg to alert him you’re about to pick the muck out of his feet.

Earlier in the lesson, I had learned to trot through a tight channel and over a pole on ground, all while steering Yetter through a course and practising looking for the horse’s correct stride before posting (lifting backside and pushing hips while horse is trotting).

My shortcomings at preparing the horse aside, when the riding’s all done and you take him back to the stable, unsaddle him, put his coat on and lead him back to his paddock, there are few better feelings than when he gives you a little approving nudge with his big head as you set him loose.

Roll on lesson #7…my lucky number.