Column: Horsing Around in Richmond (part 2) 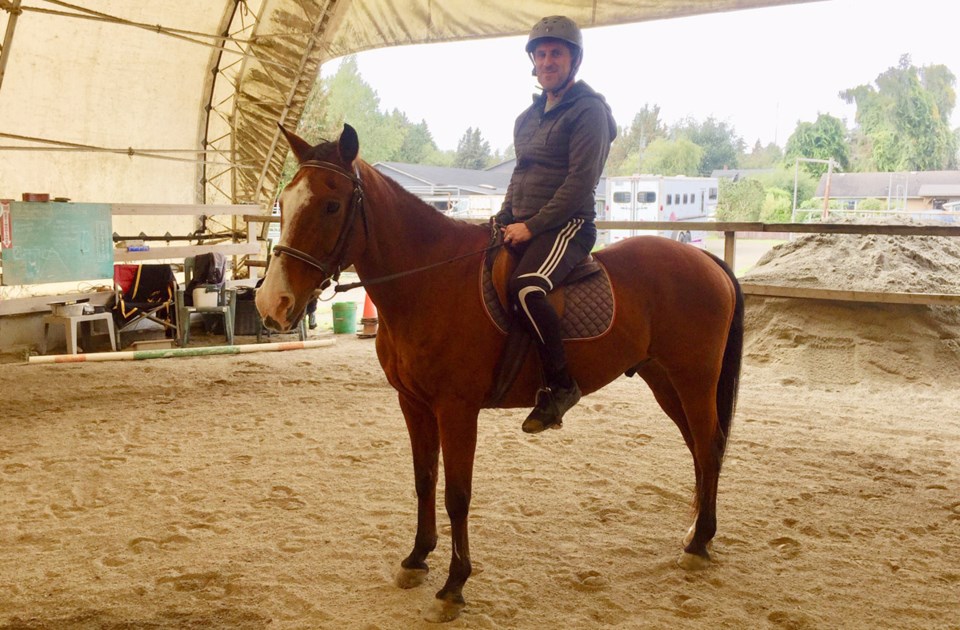 News reporter Alan Campbell aboard Chance, at the end of his second riding lesson at Blue Meadow Farm

CHANCE, the horse I had my first lesson on last week, had another learner aboard when I arrived at Blue Meadow Farm’s covered, outdoor arena.

As I leaned over the fence, Chance glanced over in my direction as if to say, “you again?”

A few minutes later, it was my turn to enter the arena and quickly, via a rundown from Yolanda, got reacquainted with the horse, his tack, stirrups and all the dos and don’ts.

It was around that time that Chance decided to critique my previous, inaugural horse riding lesson by trying to take a big chunk out my new jacket, before relieving himself #1 style all over my shoes and #2 after I’d mounted. Was I that bad?

We reviewed some of the aspects of last week (walking, stopping, posture, sitting and posting trots), all on the lunge-line, led by Yolanda.

I practiced the sitting and posting trot and transitioning back to the sitting trot (which basically went straight to a walk because I stopped urging Chance forward).

Last week seemed easier. Perhaps there were no expectations and I gave myself a bit of pass, being a total novice.

But how much did I remember? I felt myself focusing too much on my heel position, forgetting to look forward.

Trying to put a few of the pieces together from last week, all while keeping Chance on the trot, was proving difficult.

The thing is, the horse will do pretty much what I tell him to do. Problem: I’ve no idea what I’m telling him to do!

Apparently, I wasn’t doing that badly, said Yolanda, who had the patience of a saint, despite being unwell.

Thankfully, she has a fantastic way of explaining things in plain language, which is important, given I’m on top of a horse and putting a lot of energy and focus into not falling off.

We progressed into “posting diagonals” in the trot (faster than a walk diagonally across arena) before being introduced to 20-metre circles and changing reins across the diagonal.

Now it was time to learn how to “go large” around the arena — on my own, with no lead or lunge-line — and direct Chance with the left and right reins and my feet.

The rein instructions seemed natural enough, but using the opposite foot to the way you want to go…

Once I’d gotten the hang of the foot pedals, I suddenly realized I was all on my own on the horse.

The feeling was akin to that moment when you finally learn how to ride a bike without the training wheels.

Steering Chance around obstacles and keeping him moving on my own steam…wow, what a feeling.

Before too long (the clock absolutely flies in these lessons) it was time to loosen the reins and let Chance relax a bit, to which he gave out a couple of loud snorts.

The dismount this time around was a bit smoother than the previous “middle-age man’s debut on a horse” effort.

On we went to unsaddle Chance, give him a nice brush over the more sweaty areas, all while learning how walk behind a horse (not advised, but just in case).

Over went his giant raincoat, a quick wash down of his bit (mouth piece) before leading him back to his paddock for lunch.

Saddle and tack tucked away in Chance’s locker, I made my way out to the parking lot where the old boy was leaning out over his fence.

I seized the chance (no pun intended) to master the horse selfie...