Column: Horsing Around in Richmond (part 1)

In a bid to strike something off his bucket list, Newsreporter Alan Campbell enlisted the help of Yolanda Blommers, of Richmond’s Blue Meadow Farm , to teach him how to ride a horse.
Sep 28, 2018 8:00 PM By: Richmond News 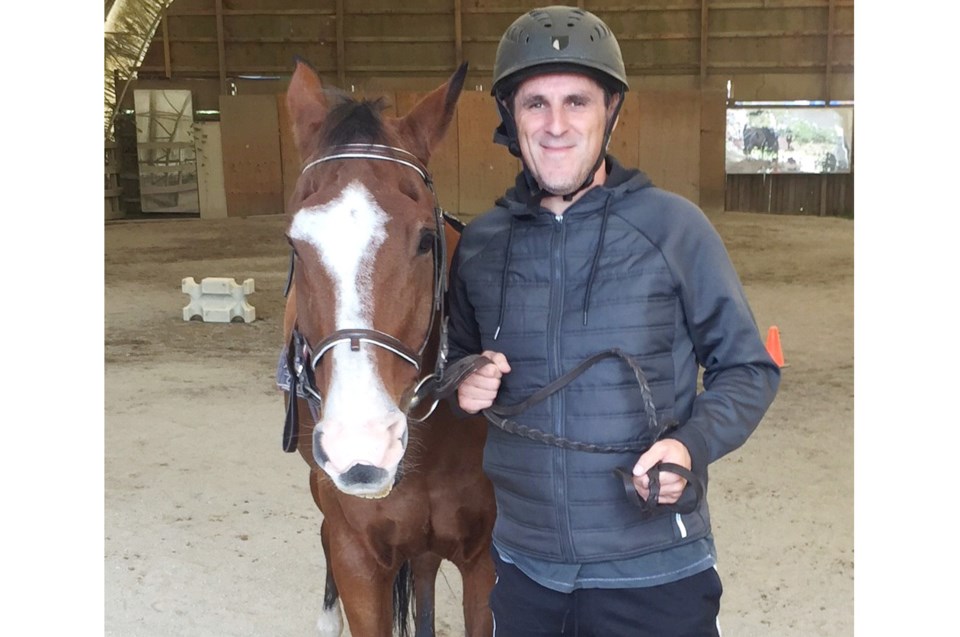 News reporter Alan Campbell survived his first horse riding lesson aboard old stager Chance, who tested Campbell with a couple of early nibbles. But will Campbell fall off next week?

So when school owner and coach Yolanda Blommers told me with a smile that my first riding lesson would be on a horse called Chance, I assumed she was having a laugh.

I consoled myself with fact that Blommers had told me prior to the inaugural lesson that I likely wouldn’t be riding the horse on the first day.

“So, get your helmet on and we’ll get you up,” she said, within moments of arriving.

“Most people on their first lesson like to get on the horse,” Blommers added.

I’m not most people.

Before getting the maiden “leg-up,” Blommers introduced me, formally, to Chance, a lovely, bay gelding, quarter horse-cross, who she described as a “seasoned lesson horse.”

“Don’t pat his head straight away…some don’t like that,” she said, a few seconds after I’d patted him on the big white stripe between his eyes.

She’d set up an English saddle for me, as opposed to western, which was fine, as they didn’t have any Scottish ones.

While showing me how to walk Chance with the “lead rope,” the old boy tried to take a couple of playful nibbles. “He’s just testing you,” Blommers assured.

More like he could smell my inexperience wafting through the covered arena.

After breezing through some safety tips or horsey dos and don’ts and through the various components of the saddle and tack (bridle, bit, etc.), it was time for the big mount, via some steps, of course (one thing at a time).

Posture was the first port of call, back straight, heels down, eyes forward and reins between your fingers. Then some balance exercises for coordination, as Blommers led Chance around the arena.

Turns out, it’s so the teacher can steer the horse for you (a bit like a long dog leash).

Apparently, I was doing so well that Blommers moved straight onto the “sitting trot” and “posting trot.”

The latter of the two actions involves slightly raising your backside off the saddle while motioning your hips back and forth, all to the stride of the horse.

Having watched my colleague, Megan Devlin, who can actually ride, doing the posting trot two weeks previous, also aboard Chance, I had an idea what it looked like.

And although feeling – and most likely looking – like a middle-aged man aboard a horse for the first time, it’s incredible how you manage to find the horse’s rhythm very quickly once your nether regions have slammed off the saddle a few times.

The trots mastered, ahem, it was time to “go large” around the arena.

Frantically scanning my eyes around the arena for fences, I was relieved to hear it was merely walking your horse around the area, while practicing stopping, going and turning.

I was pleased to hear that “whoah” is still a commonly used phrase. I knew that one!

Credit where it’s due, however, old “Chancey” was very responsive to my hesitant urges, both verbal and physical.

Dismounting, however, was much less pretty, and downright ungracious if I’m honest (glad there were no cameras).

However, I was surprised at how comfortable I felt aboard him and couldn’t stop grinning from ear to ear.

And after unsaddling and brushing the horse, taking off the tack and putting it away, it was time to take Chance back to his private paddock at the farm entrance.

After leading him in and setting him loose, he paused for a moment, as if to say “yea, you did OK, now off you pop.”