Before they emigrated to Canada, my mother and father had decided that if I, eight years old, failed to adapt to life in Canada, we’d return to Germany. Burkeville, where we lived in the late 1950’s, was full of young families with children.
Oct 24, 2020 1:33 PM By: Sabine Eiche 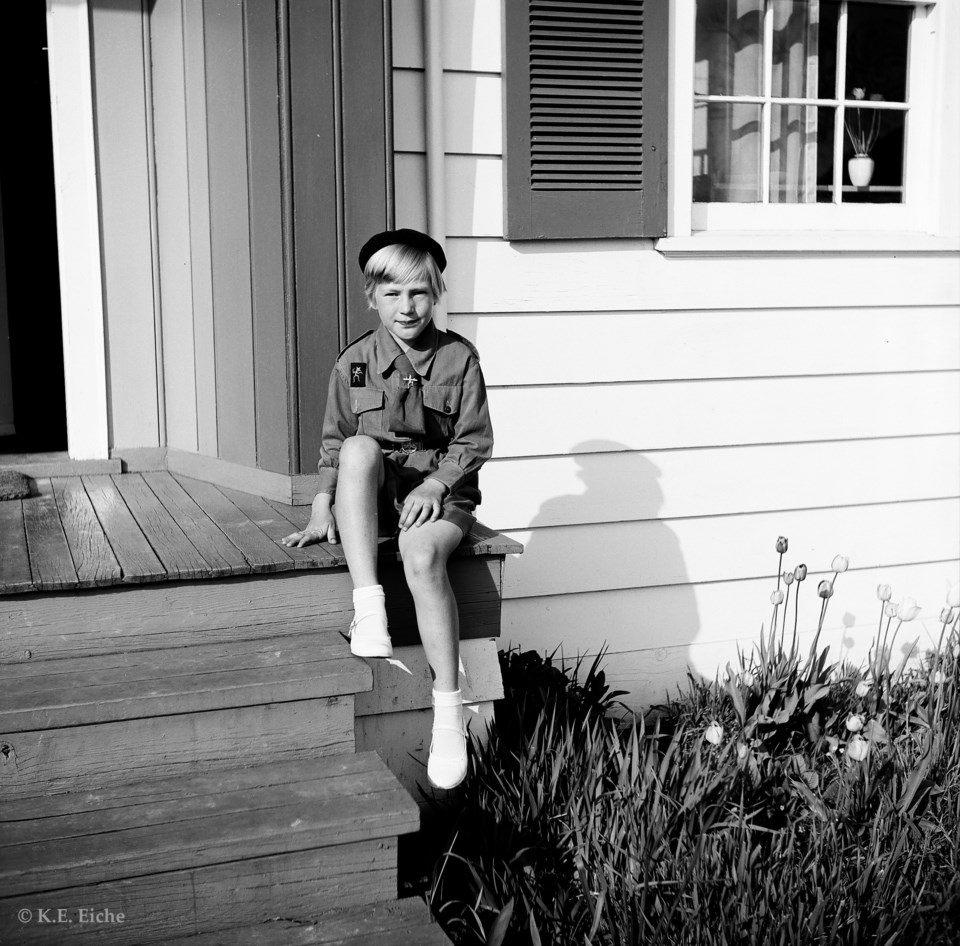 A Burkeville Brownie sitting on the steps of her house on Douglas Crescent, spring 1957. Brownies met in the Sea Island Community Centre, which was originally Mr Ernie Cooney’s barn and accommodated his team of horses and four cows. Photo: © K.E. Eiche

Before they emigrated to Canada, my mother and father had decided that if I, eight years old, failed to adapt to life in Canada, we’d return to Germany.

Burkeville, where we lived in the late 1950’s, was full of young families with children. My mother enrolled me in Sea Island Elementary School the day after we arrived. I didn’t speak any English, but for children, language isn’t the prime means of communication – playing is. Across the back lane from us was the Sea Island Community Centre, offering many activities. Everyone got involved – remember, it was the pre-electronic era. I joined the Brownies, where I learned the semaphore alphabet and how to make tapioca pudding.

After Brownies came Square Dancing. It was the Fifties, and wide skirts with crinolines were the fashion. Skirts swirled like flower petals as we skipped through the steps. Laughter and pounding feet often drowned out the music. I had no problem adapting to the Canadian way of life.

By the twentieth century, people were moving to Canada from all over the globe. When we arrived, European immigrants constituted a considerable part of the population. There was a lot of diversity, but I don’t remember diversity then being a subject for political discussion – however, the situation of indigenous Canadians hadn’t yet received the attention it now has. We lived in Canada, side by side with others. We could have been described as diverse and Canadian at one and the same time – diverse and united.

Perhaps ‘diversity’ was then less of a political issue because there tended to be more contact among people – I repeat, it was before digital technology. Over the years, my parents lived in three different neighbourhoods in Richmond and found an atmosphere of true neighbourliness in all. I now live in one of these neighbourhoods. Many different languages are spoken here today, but unfortunately I understand only English. When I see people walking outside, they’re usually staring at their smartphones. Have all the gadgets and distractions filling our lives suppressed the need we once felt for human contact? That would be sad, since we have much more in common with our fellow human beings than we have with electronic gadgets.

These thoughts – about diversity and unity – have been much on my mind since a couple of friends observed that in my writings I seem to view nature and humans as two distinct entities. But I never doubted that humans are part of nature. Evidently I failed to convey it clearly enough. That we’re all part of nature is an important point and worth stressing because it’s essential for understanding how we humans relate to our world as well as to each other.

Lord Northbourne expressed it perfectly in 1940: “We have invented or imagined a fight between ourselves and nature; so, of course, the whole of nature, which includes ourselves, ... suffers ... We have tried to conquer nature by force and intellect. It now remains for us to try the way of love.”