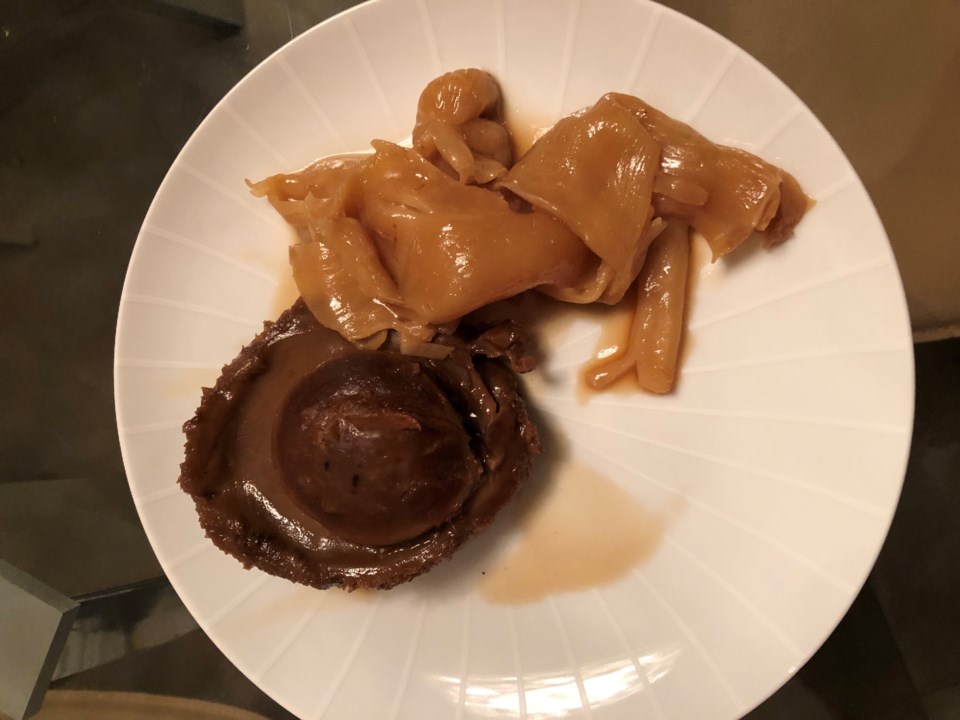 With the Lunar New Year approaching, abalone will be part of many family’s meals.  Many people often wonder why abalone is such a big deal in Chinese cuisine.

Abalone is a large sea snail, so it is basically a bigger version of an escargot.  It is expensive because it is rare and needs to be hand-harvested.  It is found in the cold waters of New Zealand, Australia, South Africa, Japan, and the west coast of North America.  But in modern times, abalone can be farmed, so abalone is more common and is now available at lower prices.

Abalone is associated with wealth and prosperity because in the past, it was so exclusive.   The Chinese word for abalone is two Chinese characters that translate as “guaranteed abundance”, so eating abalone is symbolic and a connection to Chinese culture.  When you serve abalone to someone, you are wishing them prosperity, and by eating it, you are accepting the other person’s well wishes.  Some people choose not to eat abalone for various reasons, and this is generally culturally acceptable, but it is a good idea to discreetly disclose the reason before the abalone is served.

Abalone is a good source of protein, omega-3 fatty acid, and various vitamins and minerals.  It is also low in saturated fat.

By itself, abalone has very little flavour, but if cooked correctly, the texture is soft yet chewy.   It is very filling as it is porous and soaks up the flavours of the rich broth that it is usually cooked in.  Because abalone used to be so expensive, not many people know how to cook abalone.  Techniques and recipes on how to cook abalone are passed down in families and guarded like family treasures with the secrecy of McDonald’s special sauce.

You most often see the smaller 40-head abalone used in soup stock and larger 20-head abalone in dishes.  Most abalone under 10-head are served as a course by itself, as these abalones get exponentially more expensive.  In general, the bigger the abalone, the older and more rare it is.  Dried abalone is more coveted and expensive than live or canned abalone, as dried abalone can be stored longer and has more concentrated flavours.

I have had the good fortune of having all sizes and styles of abalone, including a one-head abalone, which is like eating a 16 oz steak.  One of my favourite untraditional ways to eat abalone is cold in thick slices as an appetizer.

For wine pairings, because abalone is usually served in a very thick, rich sauce, I like a simple wine that will not compete for attention with the abalone or the broth. Especially since the Lunar New Year is near Valentine’s Day this year, try Domaine des Billards 2016 Saint Amour.  This is a wine made with Gamay grape and on sale at BC Liquor stores until Mar. 6 at $27.99.  It is a French red wine from the most northerly Cru Beaujolais region.  For more detailed information about this wine, check out my wine video review of this wine on my YouTube channel