Bald, pot-bellied, bermuda shorts, binoculars slung around the neck – when I was a kid, that was my mental picture of a birdwatcher. Now I’m one of them.
Jul 20, 2019 1:00 PM By: Sabine Eiche 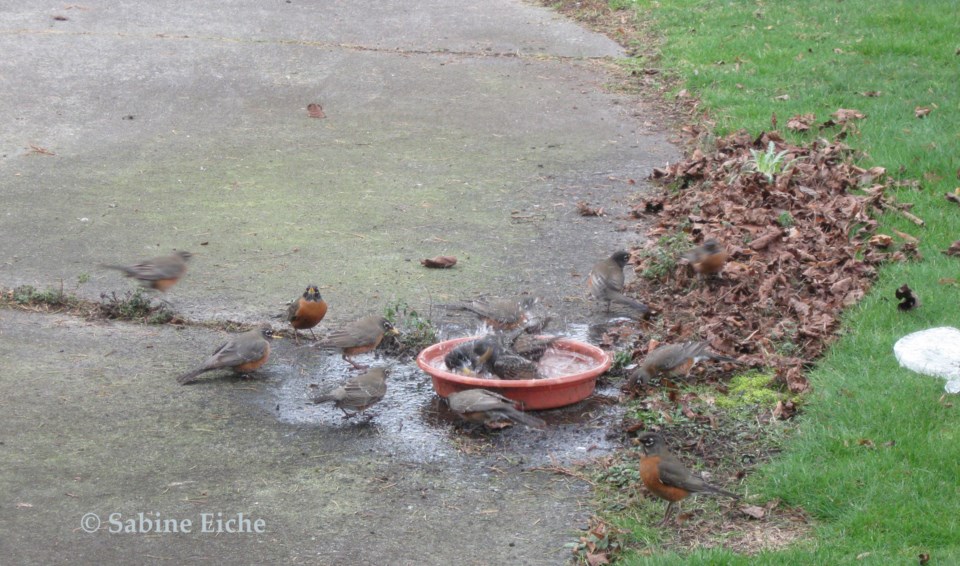 Robins and starlings having a splash-in, February 2019. Photo: S. Eiche

Bald, pot-bellied, bermuda shorts, binoculars slung around the neck – when I was a kid, that was my mental picture of a birdwatcher. Now I’m one of them. Not what the British call a twitcher – a birder who keeps lists of unusual birds seen – but rather what’s known as a backyard birdwatcher. With offers of unlimited access to trees, flowering plants, and feeders, I’ve been spreading the word among Richmond’s birds that they’ll find food, water and shelter at my place. What do I get out of it? The feeling that I’m making a difference, a greater awareness of what’s happening around me, a sense of peace, surprises in my garden and infinite entertainment.

Every day for the last two years, regardless of the weather, I’ve been sitting on the deck, in the same spot, at the same time – daybreak – drinking my morning coffee, looking across the backyard to the hawthorn, rowan and beech trees. This monotonous routine has its advantages. The birds are used to me because they see me appear regularly, and I, in turn, see them at the same time, in the same setting, every day. They’re very much creatures of habit. They have their favourite branches, and when two or more species want the same spot, the smaller usually defers to the bigger. Lately it’s been hummingbirds versus finches. When the finch comes in for landing, the hummingbird helicopters away. However, when it’s hummingbirds versus chickadees, the hummingbird is capable of giving chase to the chickadeee.

Birds need lots of water, and I’ve put out many saucers and containers, including shallow ones in which they bathe. Occasionally a group of birds will hop into one saucer together and have a big splash-in, but in general they want the amenities all to themselves, and without having to wait. If the saucer is already taken, they don’t hesitate to tell the occupant to buzz off.

There’s evidently plenty of protein to be gobbled up in the yard. Birds can’t smell, but their vision and hearing are phenomenal, as I witnessed one late afternoon in April. The air was full of bird song, coming from the hawthorn and rowan, which were backlit by the sun. Suddenly I noticed a bird swoop down, expertly navigating a mesh of branches, and in that split second I saw an insect, also backlit by the sun, zip across the grass. In a flash and right on target the bird bagged the bug. The spectacle left me breathless.

Watching birds consume a vegetarian meal is almost soothing by comparison. I never planted kale, but lots of kale plants have appeared in the strangest places, probably thanks to seeds dropped by birds. In the spring I saw finches swaying on the tops of bolting kale, eating the little yellow flowers. I, too, love kale flowers, but I’m going to let the finches take all they want – they, together with other birds, have turned this garden into the closest I’ll ever get to a paradise on earth.

Sabine Eiche is a writer and art historian.
www.sabinedellarovere.com