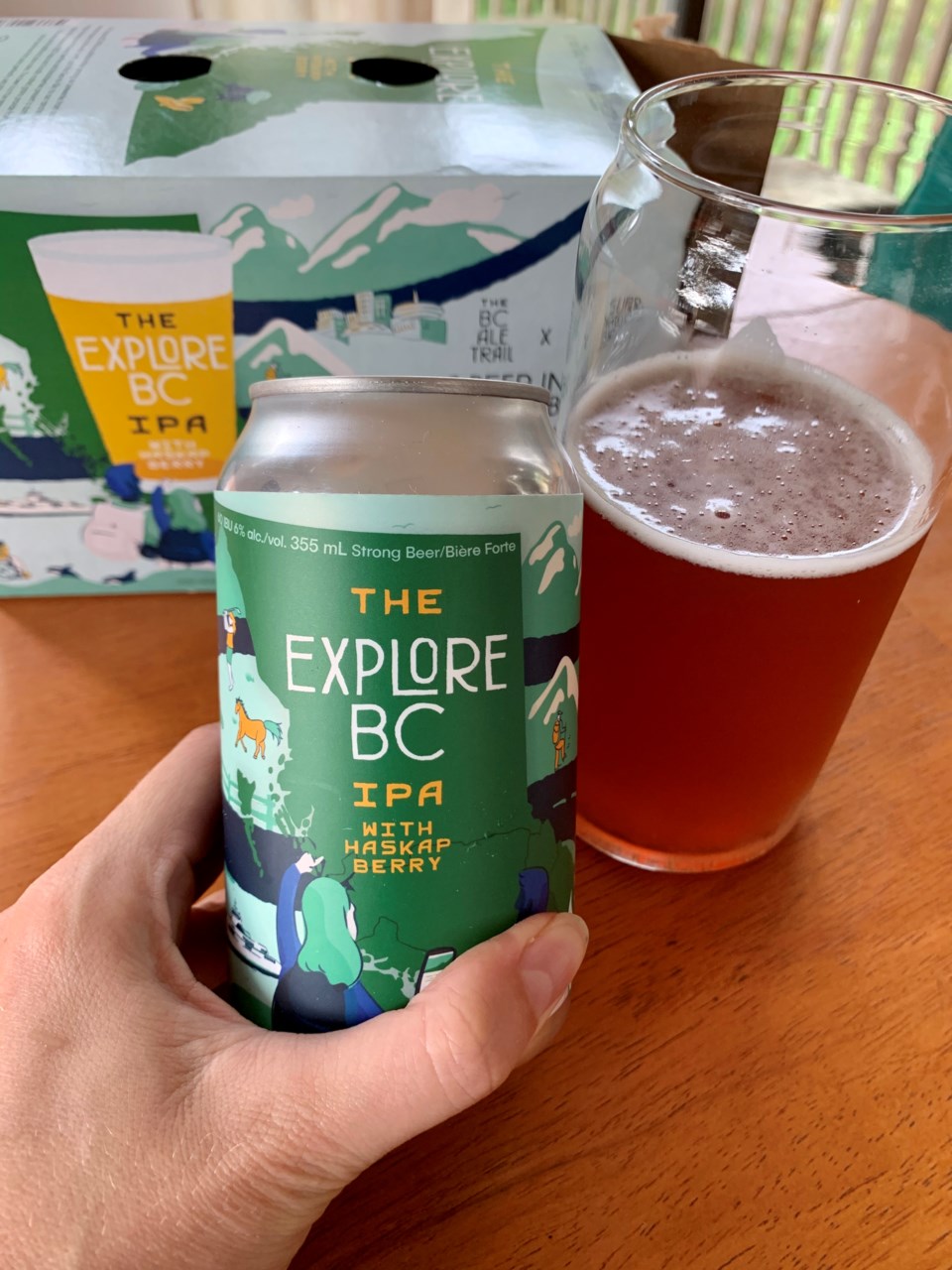 Reach for an Explore BC IPA before the stocks run out. Photo Robyn Hanson

In honour of October being B.C. Craft Beer Month, Explore B.C. IPA is a limited edition collaboration among six breweries from across the province.

All of the ingredients showcase the wealth of agricultural bounty that B.C. has to offer, including malted barley from Gambrinus Malting in Armstrong, hops from Bredenhof farms in Abbotsford, and special additions of haskap berries grown in Lumby and blackberries from the Fraser Valley.

Ken Beattie, Executive Director of the BC Craft Brewers Guild describes the special brew’s origins, “Working with our local partners across B.C., we have released a small batch of Explore BC IPA with haskap berries at select locations across the province. This beer was created to celebrate the 5th-anniversary of the BC Ale Trail and to encourage visitors to explore their local communities this fall as part of B.C. Craft Beer Month.”

Beattie continues, “The BC Ale Trail along with the BC Craft Brewers Guild is pleased to continue to innovate and collaborate with Destination BC, the local tourism associations, and our member breweries around the province to encourage visitors to support and safely explore their local communities while indulging in their love of craft beer.”

Each of the six participating breweries is based in a different region of B.C., and each brings its own unique story and contribution to the beer:

1. Vancouver Island Brewing (Victoria) It’s is one of BC’s original trio of microbreweries that opened back in 1984 and helped kick off the craft beer revolution. As the host brewery, VIB provided institutional knowledge and expertise, helping to produce an exceptional beer.

2. Wheelhouse Brewing (Prince Rupert) One of the pioneers that helped expand the BC Ale Trail to northern BC when it opened in in 2013

3. Fernie Brewing (Fernie) The easternmost brewery in BC is a family-run operation that has been a regional leader in the Kootenay Rockies for nearly two decades.

5. Red Collar Brewing (Kamloops) Founded by a brewmaster who has been part of BC’s craft beer scene since the 1990s.

I’m an IPA fan but I usually shy away from fruit ales. Not this one. I really enjoyed the Explore BC IPA. Orange-red in the glass, it has a pleasant hoppy, malty nose with a kiss of fruit. There is a balanced blend of malt and hops on the palate with a gentle tang from the haskap and blackberries. As you’d expect, the IPA is dry but there’s a slightly sweet finish at the end. Unique, intriguing, and delicious. I guess that six brewing heads are better than one or two!

For locations to buy the Explore B,C, IPA visit the distribution list at or learn more on the B.C. Ale Trail download their app.

Most Canadians cultivating an interest in gardening, finds poll
Jun 24, 2021 6:00 AM