Column: A tale of two hankies

My old brown anorak was practically stiff with dirt, so last week I decided to wash it, adding other dark clothes from the laundry hamper. I turned all pockets inside out and removed tissues as well as crumbled leaves and balls of fluff.
Jan 4, 2020 1:00 PM By: Sabine Eiche 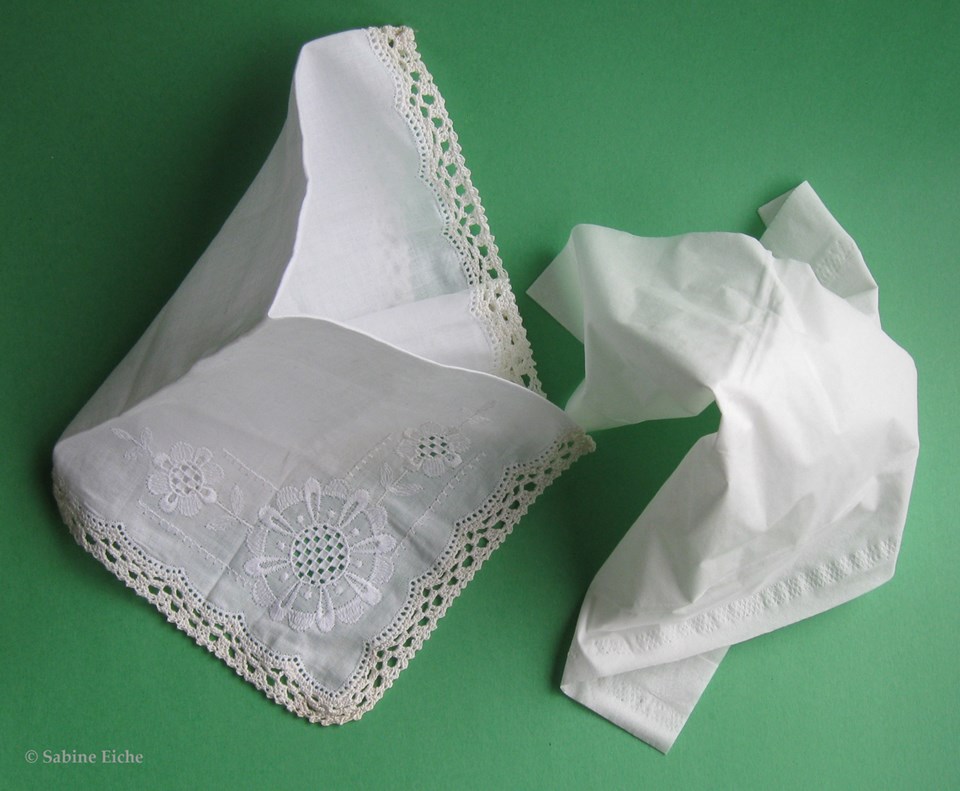 A cloth hankie can last decades, a paper hankie has a lifespan that can be calculated in seconds. Photo: © S. Eiche.

My old brown anorak was practically stiff with dirt, so last week I decided to wash it, adding other dark clothes from the laundry hamper. I turned all pockets inside out and removed tissues as well as crumbled leaves and balls of fluff. Because I’d wanted to wash that anorak for a long time, it was with a sense of accomplishment that I opened the lid of the washing machine. Imagine my horror when I gazed down and saw everything covered with flecks of white – one paper hankie had escaped my thorough search and ended its life tormenting me.

Wait. Yes, it was annoying to spend hours picking tiny paper flecks off the inside and outside of a load of laundry, and then clean the tub of those bits that hadn’t clung to the clothes. But the mishap’s timing was opportune, because I’d just arrived at a fork in the behavioural road, so to speak.

Some months ago, a friend mentioned that she keeps a box of paper tissues in the house only for her students – she’s a piano teacher. We’re both from Europe, where it was customary to use cloth hankies. My friend remained faithful to the tradition, but I eventually strayed and blew my nose in tissues, although in our purses my mother and I always carried cloth hankies, dabbed with a drop of 4711, the original eau de cologne from Cologne.

Kleenex, the first paper tissues, were launched by Kimberly-Clark in 1924. Invented for wiping off make-up with cold cream, they were soon serving other purposes as well. In 2012-2013, it was calculated that people in the United States used more than 255 billion paper tissues a year – and that’s only a small fraction of all those paper based consumer products that are destroying our forests, consuming our water supplies and adding to our planet’s pollution.

Before the early 1900s, then, cloth hankies were ubiquitous. Hankie is an abbreviation of handkerchief, which is formed from the Middle English “kerchef” (from Old French “couvrir,” to cover, and “chief,” head), a folded piece of cloth covering the head. Around 1400, a piece of cloth for wiping sweat off the face, etcetera, was called a handkerchief. Blowing one’s nose in it was a logical next step.

By the Renaissance, the handkerchiefs used by the well-to-do were items of luxury, made from the finest fabrics, richly embroidered and trimmed with lace. They served not only to wipe perspiration from aristocratic brows and to clean noble noses, but also as instruments of flirtation – if a lady dropped a handkerchief in front of a gentleman, it signified she was not averse to a bit of dalliance.

After my friend and I’d discussed cloth versus paper hankies, I searched for all the cloth hankies I possessed, most dating from my childhood. Now every paper hankie has been evicted from my pockets, replaced by the environmentally friendly cloth. Switching from paper to cloth hankies also means no more fears of laundry ruined by shredded tissues.