With plenty of new faces, Senators looking to raise the bar as rebuild continues

D.J. Smith appreciated the fight his team showed last season. The next step for the head coach of the Ottawa Senators is seeing that effort morph into tangible results.
Jan 12, 2021 4:08 PM By: Canadian Press 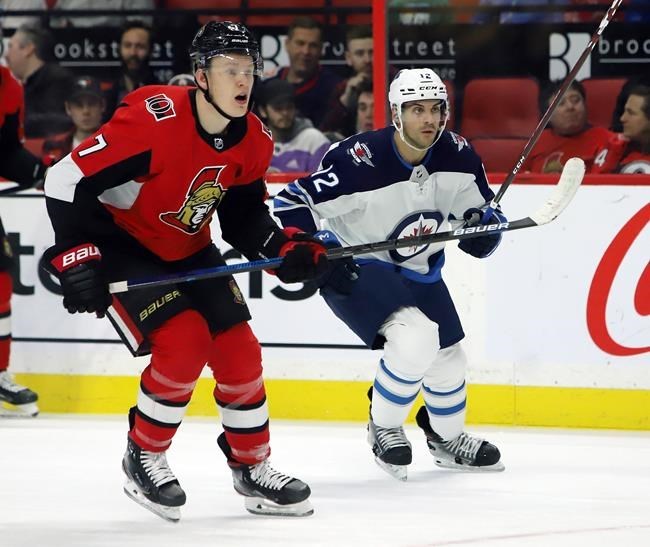 The next step for the head coach of the Ottawa Senators is seeing that effort morph into tangible results.

"We want to be able to play even with teams or better," said Smith, who's set to begin his second season behind the bench in the nation's capital. "For the most part last year, we were always counter-punching. Even when we won, we spent a lot of time in our zone. We had to hang on a lot.

"We want play a little more even with these teams, regardless of the wins and losses."

Beginning to emerge from the darkest days of its rebuild, Ottawa looks to be in tough heading into a shortened 56-game NHL season that will see the club play as part of an all-Canadian circuit — officially dubbed the North Division — borne out of necessity because of border restrictions related to COVID-19.

There's no doubt the Senators got better in the fall with some key additions, including No. 3 overall draft pick Tim Stuetzle, but the gulf between themselves and the other six franchises residing north of the border remains vast.

Ottawa has finished 30th, 31st and 30th overall the last three seasons, but it's clear being a pushover is no longer acceptable in 2021.

"We want to take a step and start winning games," defenceman Thomas Chabot said. "Last year we talked about creating an identity for ourselves. We want to keep the same thing going, but we also want to be in games and win more hockey games."

"It's been hammered home to us from management that the last few years have been unacceptable," said Gudbranson, an Ottawa native now on his fourth team since 2019. "We expect a lot of ourselves. There's going to be some growing pains. It just happens when you're young.

"That buzz is in the room that we're going to be better. We feel confident about it. It's how we handle ourselves, how we come in every single night, and what we do on the ice. Every single guy here has taken that to heart big time."

Set to make his NHL debut on his 19th birthday Friday against Toronto, Stuetzle knows there's plenty of hype surrounding his arrival in the nation's capital. "It's great that everybody's so excited," he said. "But first of all I need to prove (myself) on that level and play good hockey."

Set to enter his third NHL season, Tkachuk said the Senators believe they'll surprise some people in a division loaded with high-end talent across the board. "What we have in our minds, is to make the playoffs," the gritty, talented winger said. "We've got so many veteran guys that have won, have experience." Another area to watch off the ice is Tkachuk's contract situation as he heads into the final year of his entry-level deal.

IT'S ABOUT THE PROCESS

Smith is looking to see improvement across the board from his team this season. "There's a lot of things we have to do better that will show you that your team is going in the right direction," he said. "Special teams, power play, especially, has to be significantly better. In order to win, you need all these things going. I think we'll be much improved this year in those areas."

Where to begin when it comes to the Senators? Apart from all the names listed above, there's one more key addition this season — a return to the team's two-dimensional centurion logo. Ottawa fans have been clamouring for the change, and the team finally delivered by going back to its expansion roots. Also gone are the Senators' red jerseys, with black once again a dominant colour along with the team's road whites.

After four home games to open the season, Ottawa heads on the road for seven straight, with stops in Winnipeg, Vancouver, Edmonton and Montreal. For a roster with so many new faces, it should provide an opportunity for the group to bond with COVID-19 protocols restricting teams to the hotel and arena when in road cities.

This report by The Canadian Press was first published Jan. 12, 2021.