Struggling Canucks need to 'figure it out from within': GM Jim Benning

Vancouver Canucks fans hoping a big trade will solve the beleaguered team's issues this season are likely to be disappointed.
Mar 5, 2021 3:37 PM By: Canadian Press 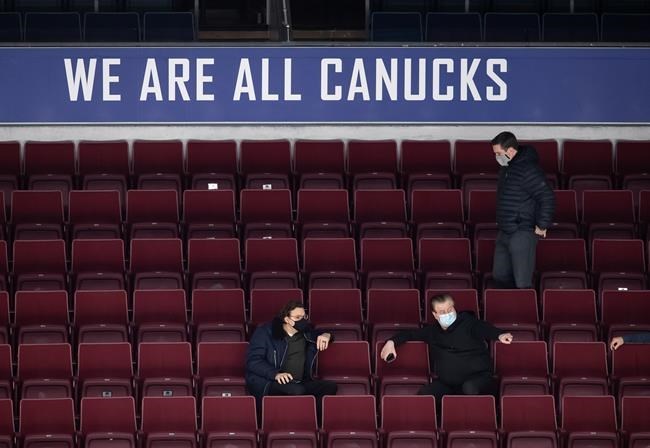 Vancouver Canucks fans hoping a big trade will solve the beleaguered team's issues this season are likely to be disappointed.

General manager Jim Benning said Friday that the Canucks need to rely on pieces they already have as they work to salvage a disappointing campaign.

With COVID-19 protocols in place and a flat salary cap, making moves is more difficult this year, he said.

"We can’t look to the outside to improve things," Benning told reporters. "We’ve got to figure it out from within.”

It's possible that some bodies could move before the NHL's trade deadline on April 12, he added, but noted that blockbuster deals have been few and far between this year.

“I expect we’re going to get some calls on our players and we’re just going to see where it goes," Benning said.

After impressing many in the playoff bubble last year, Vancouver won just two games in February and currently sits in second-last spot in the all-Canadian North Division, four points out of a playoff spot.

A brutal schedule hampered the squad to start the year, Benning said, limiting how much time the group had to practise.

The GM believes the group has performed better recently, and said the results could be different through the second half of the season. The Canucks beat the first-place Toronto Maple Leafs 3-1 on Thursday night.

“Of course I’m not happy with our record," he said. "But I think if you play the right way, do things the right way, we’ll start winning our share of games and our record will be better than it is right now.”

Canucks coach Travis Green also thinks his team should have more points based on how Vancouver has played in recent weeks.

“Yes, maybe things haven’t quite gone perfectly this year. But we’re only halfway through the season and I like the way our team’s been playing as of late," Green said.

“We’ve got a great group of young players that are still learning their way playing in a tougher division this year. And I agree with what (Benning) said — the future is very bright for the Vancouver Canucks.”

Two underperforming teams in the North Division have already opted to make coaching changes this season.

“I’m not looking to make a coaching change," Benning said. "I think (Green) and his staff have done a good job with our group.”

Green's contract expires at the end of the season, and despite the results through the first half of the season, the Canucks would like to keep him around long-term, Benning said.

“My feeling on Travis is we really like him, he’s done a good job with this group. He’s our coach," he said. "I don’t comment on player negotiations, I’m not going to comment on coaching negotiations. But it’s something that we’d like to get done moving forward.”

Green isn't the only contract Benning and his team need to get done, however.

Three of the team's top young stars will be needing new deal come the end of the season, including centre Elias Pettersson, defenceman Quinn Hughes and goalie Thatcher Demko.

The Canucks will start working on those contracts after the trade deadline, Benning said.

Getting the business dealt with is likely to be a costly endeavour. Hughes (two goals, 20 assists) and Pettersson (10 goals, 11 assists) are the team's No. 2 and 3 scorers respectively, and Demko is solidifying his spot as Vancouver's starting goaltender with a .911 save percentage.

Between the outstanding deals, a flat salary cap and a looming expansion draft, the Canucks are facing unprecedented challenges, Benning said.

While it's not the season he expected, the GM believes the challenges will be good for the club long-term.

“I look at it as adversity is a good thing. People are hard on you but you try to figure out a way to get better," he said.

This report by The Canadian Press was first published March 5, 2021.