TOKYO — Sara Groenewegen's strong performance both on the mound and at the plate wasn't enough to help Canada overcome its softball rival from south of the border.
Jul 22, 2021 5:27 AM By: Canadian Press 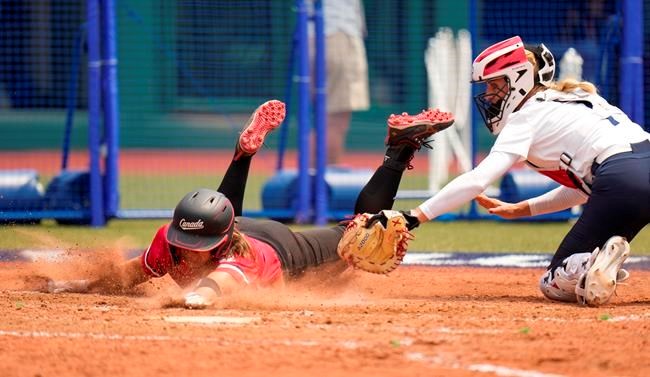 TOKYO — Sara Groenewegen's strong performance both on the mound and at the plate wasn't enough to help Canada overcome its softball rival from south of the border.

Monica Abbott pitched a complete-game one-hitter, and the United States beat Canada 1-0 in Fukushima, Japan on Thursday in round-robin play in softball action at the 2020 Tokyo Games.

Groenewegen pitched two shutout innings, allowing three hits, striking out four and walking one batter, while also supplying Canada's only hit of the game as a pinch-hitter in the sixth inning.

"Obviously I hit it well, but sometimes that's not good enough because they make a good play," Groenewegen said.

Canada is now 1-1 at the tournament after opening with a 4-0 win over Mexico on Wednesday.

The Canadians next face Australia on Saturday. Four players remain on Canada's team from a crushing defeat to Australia at the 2008 Beijing Games that prevented Canada from earning a medal.

Groenewegen, who was also dominant on the mound in the win over Mexico, is making her Olympic debut three years after spending roughly 10 days in a medically induced coma with Legionnaires' disease, a severe form of pneumonia.

Competition picks up on Friday, when the Games officially kick off with the opening ceremony at Tokyo's Olympic Stadium.

The Canadian Olympic Committee said Thursday that a small contingent of 30 to 40 athletes, including flag-bearers Miranda Ayim and Nathan Hirayama, would be present.

"Due to the Olympic Village arrival rules outlined in the Tokyo 2020 Playbooks, athletes are only arriving in the Village five days before they compete," Eric Myles, COC chief sport officer, said in a release. "This means that there are less athletes in the Village and that most of them are on the verge of competing."

Tokyo is under a state of emergency due to COVID-19 complications that will remain in place throughout the Games.

The first medals will be handed out Saturday, with Ottawa cyclist Michael Woods having a good shot at a podium finish in the men's road race.

Canada has a team of 370 athletes in Tokyo, which is its largest since the 1984 Los Angeles Games.