New-look Canadiens primed to make waves: 'We can play pretty much any way you want'

Marc Bergevin joked after the start to a busy, unusual off-season back in October he was going to take a vacation. The general manager of the Montreal Canadiens certainly earned it.
Jan 12, 2021 4:09 PM By: Canadian Press 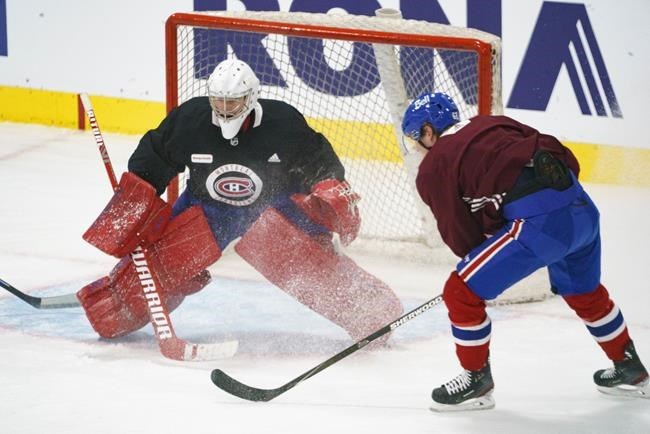 Marc Bergevin joked after the start to a busy, unusual off-season back in October he was going to take a vacation.

The general manager of the Montreal Canadiens certainly earned it.

Bergevin pulled the trigger on a string of moves following his team's surprise showing during the NHL's summer restart to a 2019-20 campaign halted in March by the COVID-19 pandemic.

Hot on the heels of Montreal's upset of the Pittsburgh Penguins in the qualifying round and a subsequent hard-fought, knife-edged series with the Philadelphia Flyers, the Canadiens made a series of acquisitions that signalled they mean business — and now.

"We have a fast team, we have a bigger team," Bergevin said. "We can play pretty much any way you want. We're still going to play our game, but I think we're well-equipped now to play against bigger teams than we were in the past."

Montreal added Josh Anderson and Tyler Toffoli up front, Joel Edmundson and Alexander Romanov join a defence corps led by captain Shea Weber, and Jake Allen has been tabbed as a dependable, load-sharing backup behind No. 1 goalie Carey Price.

Coupled with the emergence of centres Nick Suzuki and Jesperi Kotkaniemi during the summer, the club is eyeing big things ahead of a shortened 56-game campaign in the this-season-only all-Canadian circuit created to avoid crossing into the United States because of border restrictions.

"We've made some great additions in the off-season," said Price, whose team was 24th in the overall standings when the schedule was halted 10 months ago. "We have some players that made some great strides.

"We're looking forward to getting started."

The netminder saw a consistency during the restart that wasn't there through 71 games last season, and wants to see that continue in what should be a very competitive North Division.

"We were playing our systems well, and everybody was buying in," Price said. "Everybody did their job. That's a recipe for success. Hopefully we can do that for the entire season."

Canadiens winger Brendan Gallagher comes into every training camp optimistic, but this time around feels different.

"When you look at our team now, it's exciting," he said. "You can see the improvements that were made. The pieces that were added are all going to play important roles and they fill needs that we had. It's still on us as players to come together as a group, understand where everyone's going to fit in, and be accountable to each other to show up and do those jobs every night.

"But as a group, the potential is certainly there. Now it's on us to live up to that."

YOUNGSTERS ON THE RISE

Montreal's two young centres took great strides over the summer, and it will be crucial for Suzuki and Kotkaniemi to continue down that path in what will be a busy, grinding 2021 schedule. "You've got some good veteran players that can help these guys get through," head coach Claude Julien said. "Everybody at some point has a little bit of a lull in a season — whether it's for a week, whether it's for a few games. When you have a good team, other guys pick it up and other guys help you get through it."

Acquiring the veteran No. 2 to spell Price wasn't Montreal's flashiest move, but it could wind up being the most important. The Canadiens wanted to lighten the load on the future Hall of Famer, and Allen should fit that bill after coming over from St. Louis. "He's a solid addition to our team," Price said. "He's going to complement me well. He's going to log some quality minutes."

Apart from the roster renovation mentioned above, the Canadiens also added veteran pest Corey Perry. The former Hart Trophy winner and Stanley Cup champion will have a supporting role, but he's been through the battles, including last season when Dallas made it all the way to the final. "He's a competitive — and I'm going to use the word — he's a competitive bugger and there's not too many people that want to cross him when he's in that kind of mood," Julien said. "Not a fun guy to play against, but he's a fun guy to have on your team."

Montreal opens its schedule with six road games in 11 days, beginning Wednesday in Toronto. The club then plays twice in Edmonton and three times in Vancouver before starting its home schedule Jan. 28 against Calgary.

This report by The Canadian Press was first published Jan. 12, 2021.

Ticats to go with veteran Masoli as their starter; competed after being pressed on it
Aug 1, 2021 1:47 PM