TORONTO — Connor McDavid collected the puck in the neutral zone and moved right as he crossed the offensive blue line. His eyes and body language suggested he was waiting for a teammate to join the rush.
Jan 19, 2021 2:25 PM By: Canadian Press 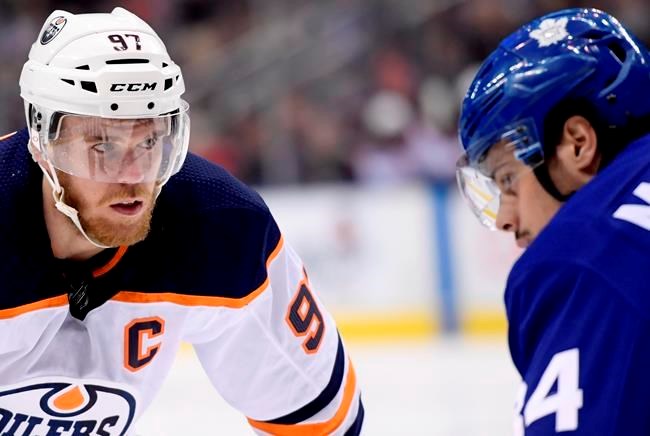 TORONTO — Connor McDavid collected the puck in the neutral zone and moved right as he crossed the offensive blue line.

His eyes and body language suggested he was waiting for a teammate to join the rush. The captain of the Edmonton Oilers had other ideas.

McDavid quickly cut back to his left on Morgan Rielly, leaving the Toronto Maple Leafs defenceman flat-footed and in his dust as he turned on the after burners. Then to top things off, the game's best player finished with a lightning-quick backhand forehand move as Toronto chased shadows.

That jaw-dropping goal sequence that capped a four-point night on Jan. 6, 2020, resulted in audible gasps inside Scotiabank Arena — back when fans were actually allowed to attend games before COVID-19 — and even brought Wayne Gretzky to his feet.

The pandemic has provided plenty of heartache, but one small silver lining is Canada's seven NHL teams being grouped together in the North Division for an abbreviated 2020-21 season. And that means a steady diet of marquee matchups, including Wednesday's first of nine meetings between McDavid's Oilers and Auston Matthews' Leafs.

"They're special talents," Toronto head coach Sheldon Keefe said. "It's fun, in our case, to coach Auston. But to even just be on the bench for those games is great.

"Throughout the division there's elite talent on every team. It's very exciting to have to go against these guys."

Matthews and McDavid spent time during the off-season down in Arizona training alongside some other NHLers preparing for a schedule they no doubt knew would see them face off a lot more than the usual two meetings of a normal campaign.

"Only positive stuff can come out of that," Matthews, who scored 47 goals in 2019-20, said of those on-ice sessions. "I'm not sure I can say that I figured (McDavid) out because I don't think anybody has or will."

The Leafs, who have wins in three of their first four games, will try to at least contain McDavid and Leon Draisaitl — no slouch himself as the reigning Hart Trophy and Art Ross Trophy winner — Wednesday and again Friday in back-to-back Toronto encounters.

The Oilers, meanwhile, are looking to build on last regular season — and not their disappointing performance during the summer restart — that saw them accumulate the best record among Canadian franchises before the coronavirus forced the suspension of the schedule. But they should also be in a foul mood after dropping three of four at home to raise the curtain on the current campaign, including consecutive 5-1 and 3-1 losses to Montreal.

"We're still trying to figure our team out," Edmonton head coach Dave Tippett said. "We've got to get our competitive levels up.

"It will be good for our team to go on the road."

The Oilers' power play was one of their strengths last season, finishing atop the league with a success rate of 29.5 per cent, but went a combined 0 for 10 and gave up two short-handed goals in those losses to Montreal.

"That's an area that should be one of our strengths," Tippett said. "It wasn't the last two games."

The Leafs have shown a lot more defensive cohesion in their last two, a 3-2 weekend victory in Ottawa and Monday's 3-1 home win against Winnipeg, but know McDavid and Draisaitl pose a unique challenge.

"They're going to be a very hungry team," Toronto winger Zach Hyman said. "We've got to be ready for them, ready for their speed. You have to be aware when you're on the ice with those elite players, and make sure you're aware where they are and what your role is."

Leafs blue-liner Travis Dermott, who played with McDavid in junior, said the idea — easier said than done, of course — is to defend as a five-man unit.

"If he's skating from their end down low with speed against our defencemen, it's going to be pretty tough," he said. "We rely on our forwards to try and get in his way at least little bit, make him take a little bit of a longer route to get to us. That's been our game plan so far dealing with speed.

"Hopefully we can continue getting in front of guys."

Dermott has had the unique opportunity to see both McDavid, who was second in NHL scoring last season behind Draisaitl, and Matthews up close in his still-young career.

And having them share this much ice in 2021 will be a treat.

"They don't come in just to do their job," Dermott said. "They come in to get better and make everyone else around them better. When I was younger I'd always want to go against Connor because I knew that was going to make me better.

"Both those guys are going to be exciting to watch, especially this season with how many times we get to play each other. It's going to be pretty special for fans."

This report by The Canadian Press was first published Jan. 19, 2021.