ZURICH — The hockey world championships were pulled from Belarus on Monday following pressure from opposition groups and a threatened boycott by sponsors.
Jan 18, 2021 11:22 AM By: Canadian Press 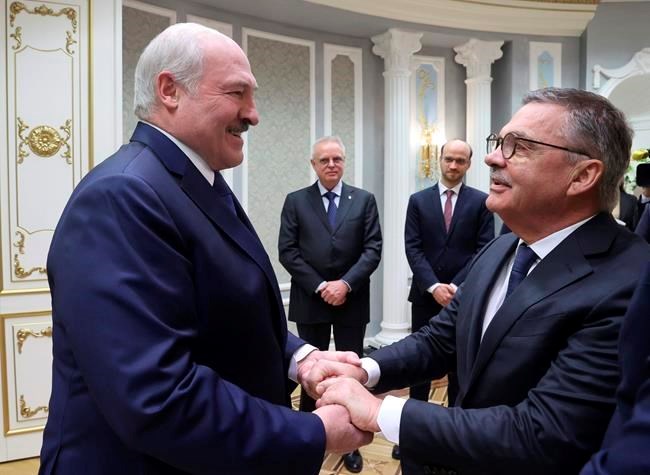 ZURICH — The hockey world championships were pulled from Belarus on Monday following pressure from opposition groups and a threatened boycott by sponsors.

The International Ice Hockey Federation cited safety concerns and said it will seek a new country to co-host the tournament with Latvia or host it on its own. The tournament is scheduled to start May 21.

The IIHF said its council “determined that it is currently impossible to ensure the welfare of teams, spectators and officials” in Belarus.

IIHF president Rene Fasel had tried to keep the men's tournament in Belarus, claiming it could build bridges between the opposition and Lukashenko. Opposition groups criticized Fasel after he and Lukashenko embraced when they met for talks last week.

Mass protests swept Belarus after official results from the presidential election in August gave Lukashenko a landslide victory over his widely popular opponent, Sviatlana Tsikhanouskaya. She and her supporters refused to recognize the result, saying the vote was fraudulent. Authorities cracked down hard on the largely peaceful demonstrations which followed.

Tsikhanouskaya welcomed the IIHF decision, saying the tournament would have heralded a renewed crackdown on the opposition.

Three sponsors of the tournament, Skoda, Nivea and Liqui Moly, said they would cancel their involvement if games were played in Belarus.

The IIHF said it will now consider where to hold the event, and said Latvia could remain as co-host or the tournament could move to a single venue. Denmark, the host in 2018, and Slovakia, the host in 2019, have both offered to step in.

Belarus previously hosted the tournament in 2014 amid criticism from some opposition figures and European politicians.

The women's world championships are scheduled to be played in Canada in April. Both the men's and women's championships were last year because of the coronavirus pandemic.