HAMILTON — The Hamilton Tiger-Cats have re-signed star linebacker Simoni Lawrence. Lawrence returns to Hamilton for an eighth season after starting his CFL career in Edmonton in 2012.
Jan 19, 2021 12:27 PM By: Canadian Press 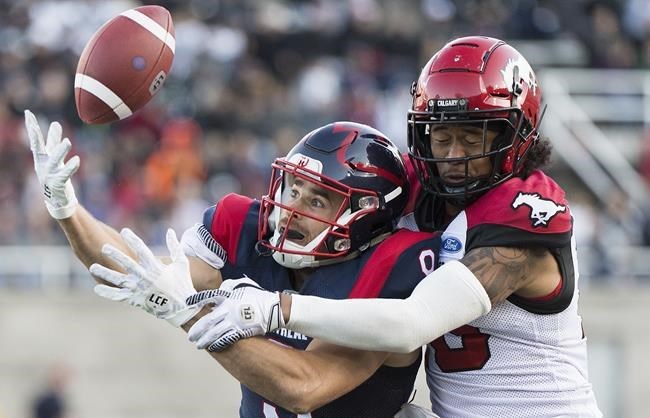 Lawrence returns to Hamilton for an eighth season after starting his CFL career in Edmonton in 2012.

The 31-year-old was the CFL East's top defensive player in 2019 after leading the league in defensive tackles (98) and defensive plays made (117). He added three interceptions, four sacks and one fumble recovery.

Lawrence set a CFL single-game record with 17 defensive tackles in a game against Winnipeg in 2019.

Lawrence holds the Tiger-Cats’ franchise record with 533 career defensive tackles after surpassing Rob Hitchcock (484) in 2019, and currently sits second behind only Hitchcock (606) in total tackles with 551.

“Simoni routinely brings positive energy and an infectious daily work ethic to our football team,” Ticats coach Orlondo Steinauer said in a statement. “He is a great leader and premier playmaker, who also strives to make a difference in our community off the field."

Wieneke lost out to Calgary linebacker Nate Holley for the league's rookie of the year award.

"His presence on offence gives us stability for the upcoming season, all while allowing us to keep opposing defences on their heals," Alouettes general manager Danny Maciocia said in a statement.

VANCOUVER — The B.C. Lions have re-signed defensive back Kenny Ladler.

Prior to playing in the NFL, Ladler suited up in 34 regular-season games with Edmonton from 2016-17, registering 156 defensive tackles, five interceptions, one defensive touchdown and three forced fumbles.

REGINA — The Saskatchewan Roughriders have signed five more of their picks from the 2020 CFL draft.

The signings come a day after the club agreed to terms with it's top pick, offensive lineman Mattland Riley.

Saskatchewan's eighth-round pick, defensive end Neville Gallimore, was also selected by Dallas in the NFL draft and played 14 games with the Cowboys this season.

NEUFELD BACK WITH BOMBERS

The Regina native will be entering his 10th CFL season and is the second-longest serving Blue Bomber.

Neufeld missed the first 12 games of the 2019 season because of injury before returning to help the Bombers win the Grey Cup.

A fifth-round pick of Saskatchewan in 2010, Neufeld was traded to Winnipeg in 2013. He has played in 106 career CFL games, including 68 starts.

Salmon played five games for the Redblacks in 2019 after spending time with the NFL's Tampa Bay Buccaneers.

Jenkins had four tackles in three games with Ottawa in 2019.

Williams played five games for Winnipeg in 2019 before signing with Ottawa prior to the cancelled 2020 season.

Norman spent the past three seasons with Calgary.

Thurman returns to the Stamps after playing 35 games for Calgary in 2017-18.

It’s the second stint in Calgary for Thurman, who played a combined 35 regular-season games for the Stampeders in 2017 and 2018 and was a member of the Stamps’ Grey Cup-championship team in 2018.

The Indiana State product was cut by the Chicago Bears in 2019 before playing for DC in the XFL last year.

“Jameer is a hard-nosed player who established himself as one of the league’s top linebackers during his previous two seasons with the Stampeders,” Stampeders president and general manager John Hufnagel said in a statement. “We’re very pleased to welcome him back to Calgary.”

This report by The Canadian Press was first published Jan. 19, 2021.