Tristan (Boondock) Connelly won his UFC debut on five days notice. Slowed by the pandemic and neck surgery, the B.C. fighter has had to wait 19 months to fight again.
Apr 22, 2021 11:20 AM By: Canadian Press 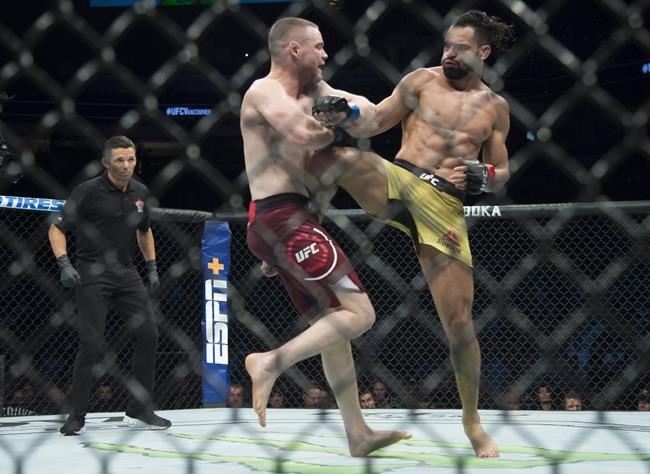 Tristan (Boondock) Connelly won his UFC debut on five days notice. Slowed by the pandemic and neck surgery, the B.C. fighter has had to wait 19 months to fight again.

The 35-year-old from Victoria, who now makes his home in Langley, B.C., meets American featherweight Pat Sabatini (13-3-0) on the undercard.

It has been a long time coming.

"It's been a crazy roller-coaster with everything. I'm excited to be back and doing what I love," said Connelly.

He made a name for himself on a Vancouver Fight Night card on Sept. 14, 2019, moving up a weight class on short notice to beat Michel (Demolidor) Pereira, a breakdancing Brazilian showboat who arrived with a ton of hype.

Despite giving up three inches in height and five in reach to the six-foot-one Pereira, Connelly put on a gritty, winning performance. The Canadian underdog earned a 29-28, 29-27, 29-27 decision, finishing the fight with a 64-32 edge in significant strikes.

The bout earned fight of the night honours with Connelly collecting a US$50,000 bonus as well as Pereira's $50,000 share since the Brazilian missing weight by one pound (at 172 pounds) and wasn't eligible for the reward.

That beefed-up bonus helped Connelly on the down payment on a new townhouse.

The five-foot-10 Connelly, who normally walks around at 180 to 185 pounds, has competed mostly at lightweight (155 pounds). He has to make 146, the limit for non-featherweight title bouts, for Sabatini.

He weighed in at 169.5 pounds for the Pereira bout. Connelly estimates the Brazilian outweighed him by 30 pounds fight night once they had rehydrated.

Pereira went on to win two of his next three UFC bouts, with the loss coming via disqualification for using an illegal knee against veteran Diego Sanchez by in February 2020.

Connelly was due to fight on a Portland card in April 2020, only to see it cancelled by the pandemic. He came home from a training stint in Las Vegas, only to start feeling the painful after-effects of a car crash the previous year.

Connelly says an MRI revealed the neck damage causing what he calls "the worst pain I've ever been in my life." The pain ran down his arms and he started experiencing severe weakness.

"I couldn't hold my head up," he said. "My fingers were completely numb, I couldn't feel anything in them. It felt like my arm was being held in an open fire while being electrocuted at the same time. I couldn't sleep."

The only thing that relieved the pain was some form of neck traction.

He underwent an operation last summer with his Victoria neurosurgeon, Dr. John Sun, telling him later that a disc had attached to the nerve, causing the pain. The problem disc was replaced with an artificial one, allowing the spine to move properly.

"I woke up and the pain was essentially gone," said Connelly. "There was a bunch of rehab to be done but a night-and-day difference from going under to waking up."

Connelly has fought twice before at 145 pounds, with both bouts coming earlier in his career. He sees the lighter weight class as giving him the best chance to showcase his skills in the UFC, although he says time will tell if he stays at featherweight.

"The UFC, there's no easy fights. Everyone's a killer," he said. "So those extra pounds make a difference when everyone's at a super-high level."

The extended layoff helped him cut weight. He did a lot of dieting, coming into camp 10 pounder lighter.

"The test will be after the fight," Connelly said of the drop in weight.

The 30-year-old Sabatini is making his UFC debut and has won his last two bouts — and five of the last six. A former collegiate wrestler at Rider University, he holds a black belt in Brazilian jiu-jitsu under Daniel Gracie

Connelly, who is also a black belt in BJJ, came late to MMA. He got involved through jiu-jitsu.

"Immediately I loved it. One class and I was hooked."

That prompted him to try kickboxing and MMA. He made his pro debut at 24 and lost four of his first seven fights but has won 11 of his 13 since — including his last five.

He says he has learned his trade on the job, not having any amateur bouts. He says he improved his MMA IQ and showed he has no quit in him.

"Win, lose of draw, you're going to have to fight me for the full 15 minutes. Unless I'm unconscious," he said.

Connelly runs a gym, which he had to close during the pandemic. He is going forward with a new gym, called Pinnacle Combat Academy, in suburban Richmond once restrictions are lifted.

He has been training in Las Vegas since January to get ready for his next fight. While that has taken him away from wife Jen and daughter Sidney, Connelly says video chats can still make his heart lift.

"The happiest feeling you've ever had in your entire life, just seeing her smile," he said of his nine-month-old daughter. "I can't wait to be able hold her again and make her laugh, smile and giggle."

His nickname Boondock came after he chose the opening theme of "The Boondock Saints," a favourite film of his, as the walkout song for his first fight. The next time out the promoter had him announced with Boondock as a nickname — and it soon caught on with MMA websites.

"I didn't pick it. it chose me. And I always think that's the best (kind of) nickname," said Connelly.

He still uses the music to enter the arena.