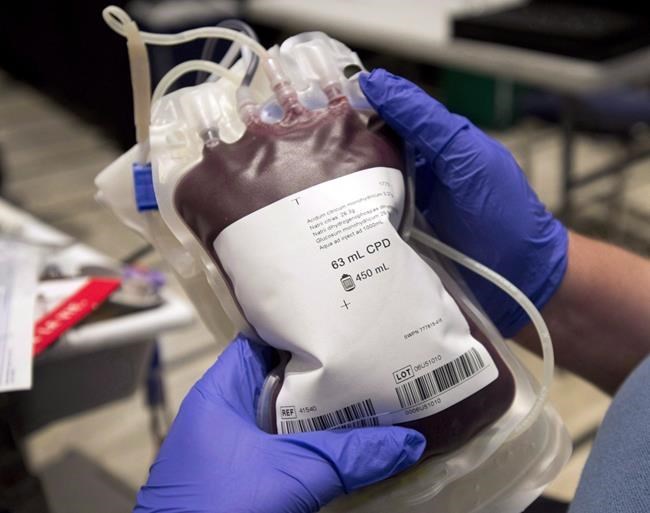 In a heated and emotional exchange during a late-night committee hearing in the House of Commons, Duncan pressed Patty Hajdu repeatedly, including a direct question on whether she'd accept a blood donation from him.

Hajdu didn't directly answer, pointing to ongoing work to end a ban on donations from men who have sex with men.

Canada banned blood donations from gay men since 1992 before allowing it in 2013 if the donor abstained from sex with another man for at least five years.

But the Liberals promised to end the ban completely in both 2015 and 2019.

Duncan said there is a desperate need for blood donations during the second wave of COVID-19.

Hajdu said both Canadian Blood Services and Hema-Quebec are independent from government and they have to do the right amount of research to end the ban entirely.

She said the organizations have been funded by the government to do that, but Duncan accused Hajdu of hiding behind bureaucrats.

"She had no problem during an election campaign telling gay men this would end," he said.

Three times, he asked Hajdu directly if she'd accept a blood donation from him, and three times she did not directly answer.

"Does she not feel comfortable, from me as a gay man, taking my blood," he asked.

Hajdu said as soon as the blood agencies submit their recommendations on how to end the ban, they will be reviewed and changes will be made.

"I think the gay blood ban needs to end," she said.

This report by The Canadian Press was first published Nov. 26, 2020.