Toronto COVID field hospital and MP in his birthday suit: In The News for April 15

In The News is a roundup of stories from The Canadian Press designed to kickstart your day. Here is what's on the radar of our editors for the morning of April 15 ... What we are watching in Canada ...
Apr 15, 2021 1:27 AM By: Canadian Press 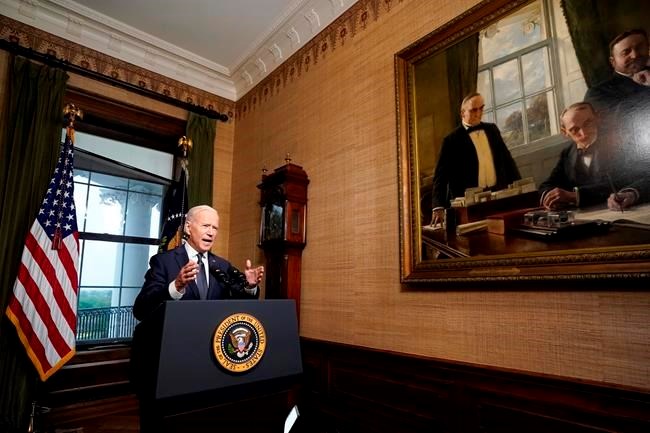 In The News is a roundup of stories from The Canadian Press designed to kickstart your day. Here is what's on the radar of our editors for the morning of April 15 ...

What we are watching in Canada ...

Ontario says a COVID-19 field hospital in Toronto could be activated later this month as it grapples with rising hospitalizations caused by the pandemic.

The Ministry of Health says in a statement that the mobile health unit at Sunnybrook Hospital is expecting to take patients in the coming weeks.

The field hospital has been set up in a parking lot at the site and is one of two in the province designed to help address growing capacity challenges.

The province says the temporary beds will provide increased capacity to the health system as a whole by freeing up acute and critical care capacity within hospitals.

The government says it will also help expand capacity by allowing the hospitals to transfer non-critical care patients to these general medicine beds.

This week, Ontario has set new records with the number of patients hospitalized and in intensive care units because of COVID-19.

Canada's procurement minister says she is in the midst of negotiating new vaccine contracts to nail down supplies of vaccine booster shots if and when they're needed next year.

"We are actively planning for 2022," Anita Anand said in a recent interview with The Canadian Press.

She said Canada's first priority remains getting doses now, and while the country remains well behind the United States, United Kingdom and several other countries, its vaccination pace has picked up significantly in the last month.

Canada expects to get every adult vaccinated fully — with both doses of the Pfizer-BioNTech, Moderna or Oxford-AstraZeneca vaccines or one shot of the single-dose Johnson & Johnson — by the end of September at the latest.

Teenagers likely will be vaccinated by then as well, but vaccines for kids under 12 aren't expected to be authorized until at least the fall.

Still, many experts believe additional booster shots are going to be necessary, either to remind the immune system what it needs to do, or protect against some new variants of the virus that causes COVID-19.

President Joe Biden started the clock Wednesday on the long-awaited, long-promised withdrawal of U.S. troops from Afghanistan, setting the 20th anniversary of the attacks of Sept. 11, 2001, as the deadline for ending "America's longest war."

From a podium in the White House Treaty Room, where former president George W. Bush launched the so-called war on terror, Biden essentially described a continued U.S. military presence as an exercise in futility.

"Our allies and partners have stood beside us, shoulder to shoulder, in Afghanistan for almost 20 years," the president said as he announced the pullout would begin May 1 — predecessor Donald Trump's deadline for his own withdrawal.

"We're deeply grateful for the contributions they have made to our shared mission and for the sacrifices they have borne."

Canada was among those allies and partners almost from the outset, with its 12-year presence — including 10 on the front lines of combat — costing the lives of some 159 Canadian troops.

Four civilians also died in Afghanistan, including Calgary Herald journalist Michelle Lang, as well as one diplomat: Glyn Berry, who was among the three people killed by a roadside bomb in January 2006.

What we are watching in the rest of the world ...

Iran's supreme leader on Wednesday dismissed initial offers at talks in Vienna to save Tehran's tattered nuclear deal as “not worth looking at,” attempting to pressure world powers after an attack on the country's main nuclear enrichment site.

The comments by Ayatollah Ali Khamenei, who has final say on all matters of state in the Islamic Republic, came after a day that saw Iran's president similarly ratchet up pressure over the accord. European powers meanwhile warned Tehran its actions were “particularly regrettable” and “dangerous.”

The talks already have been thrown into disarray by a weekend attack on Iran's main Natanz nuclear enrichment site suspected to have been carried out by Israel. Tehran retaliated by announcing it would enrich uranium up to 60% — higher than it ever has before but still lower than weapons-grade levels of 90%.

"The offers they provide are usually arrogant and humiliating (and) are not worth looking at,” the 81-year-old Khamenei said in an address marking the first day of the holy Muslim fasting month of Ramadan in Iran.

He also criticized the U.S. and warned time could be running out.

“The talks shouldn’t become talks of attrition,” Khamenei said. "They shouldn’t be in a way that parties drag on and prolong the talks. This is harmful to the country.”

The Royal Canadian Mint recommended the $1 bill be replaced by a dollar coin as a cost-saving measure. The coin, designed by wildlife artist Robert-Ralph Carmichael, depicts a loon in the water. It was dubbed the ``loonie'' almost immediately after it was introduced in 1987.

The Ontario Medical Association says it's "troubled" by findings regarding children's mental health during the pandemic, including a decline in social and emotional development in youngsters, and a stark increase in emergency room visits from patients presenting with suicidal ideation.

Mental health struggles have risen across different age groups, OMA doctors said Wednesday in a webinar with media. And they're concerned about long-term impacts that could stretch years after lockdown measures end.

Dr. Saba Merchant, a pediatrician in Vaughan, Ont., referred to the pandemic as a time of "social malnutrition" for some children.

"I must say that what we're seeing is just the tip of the iceberg," she said.

The inability of kids to attend daycare, school and other group activities has taken away elements of emotional and social development, Merchant said, while financial stress felt by some families is leading to problems of food insecurity, neglect and abuse, all of which are causing declines in mental health.

A Liberal MP was caught wearing his birthday suit in the virtual House of Commons.

William Amos, who has represented the Quebec riding of Pontiac since 2015, appeared on the screens of his fellow members of Parliament completely naked Wednesday.

A screenshot obtained by The Canadian Press shows him standing behind a desk between the Quebec and Canadian flags, his private parts hidden by what appears to be a mobile phone in one hand.

"This was an unfortunate error," Amos said in a statement sent by email Wednesday.

"My video was accidentally turned on as I was changing into my work clothes after going for a jog. I sincerely apologize to my colleagues in the House of Commons for this unintentional distraction. Obviously, it was an honest mistake and it won’t happen again.”

Bloc Québécois MP Claude DeBellefeuille, the party whip, raised the incident in a point of order after question period, suggesting a reminder about parliamentary decorum.

“It may be necessary to remind the members, especially the male ones, that a tie and jacket are obligatory, but so are a shirt, boxer shorts or pants,” she said in French.

This report by The Canadian Press was first published April 15, 2021

Indigenous leaders call for clarity, investigation into RCMP after B.C. shooting
May 12, 2021 1:00 AM
Comments