MONTREAL — Quebecers lost no time in marking the end of the provincewide curfew imposed to help lower COVID-19 cases, gathering in large groups across the province and creating a busy night for local police forces.
May 29, 2021 3:04 PM By: Canadian Press 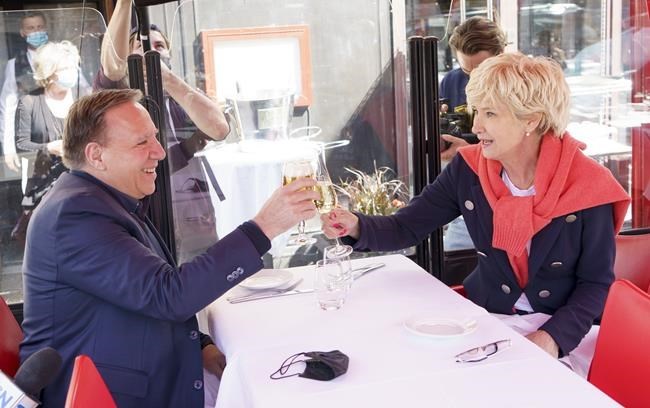 MONTREAL — Quebecers lost no time in marking the end of the provincewide curfew imposed to help lower COVID-19 cases, gathering in large groups across the province and creating a busy night for local police forces.

Authorities in multiple jurisdictions said Friday night was a hectic one, with residents cleared to be out after dark for the first time since the curfew took effect on Jan. 9.

Montreal police spokeswoman Véronique Comtois said officers monitored crowds gathered at the city's Old Port and at most major parks, but said all was peaceful throughout the evening.

"The crowds were festive," said Comtois. "We took on a preventive and raising awareness approach."

She said police didn't issue any tickets or make any arrests related to the various gatherings.

Things were less peaceful in the provincial capital of Quebec City, where local police alleged violence erupted at one of its largest parks.

City police spokesman David Pelletier said two people were arrested and six tickets were issued during the police intervention at Victoria Park, which saw officers close the site at around 10 p.m.

A man in his 20s was stabbed and another woman suffered a head injury, he said.

"The victim was transported to a hospital, but we do not fear for his life," Pelletier said of the man. "No suspect has been arrested at present."

Quebec will see an even more striking return to life without a curfew on Saturday evening when thousands of fans are expected to attend the NHL playoff match between the Montreal Canadiens and Toronto Maple Leafs.

The curfew wasn't the only measure to ease on Friday. The province also gave restaurant patios across the province the green light to reopen on the same day.

The bike-thru clinic will take place on Saturday and Sunday, with Montrealers urged to attend with or without an appointment. It's happening at the Circuit Gilles Villeneuve racetrack, usually home to the Formula 1 Montreal Grand Prix.

Health authorities said they expect to administer about 1,000 vaccine doses over the weekend. The racetrack clinic will shift to a drive-through model for motorists over the next two weekends, with shots administered by appointment only.

The developments came as Quebec reported 410 new cases of COVID-19 on Saturday, along with seven more deaths related to the virus. One of those fatalities took place over the past 24 hours, the province said.

Health officials said hospitalizations declined by 12 in the past 24 hours and now stand at 373, while the number of patients in intensive care remained steady at 91.

The province said it administered 95,505 doses of COVID-19 vaccine on Friday, for a total of 5,405,885 since the launch of the inoculation campaign. It said about 59.1 per cent of Quebecers have received at least one dose.

This report by The Canadian Press was first published May 29, 2021.