MONTREAL — The Quebec and federal governments unveiled plans on Saturday a central place for the province's Indigenous communities to go for support over former residential schools, easing concerns that the process would be mired in red tape.
Jun 12, 2021 2:52 PM By: Canadian Press 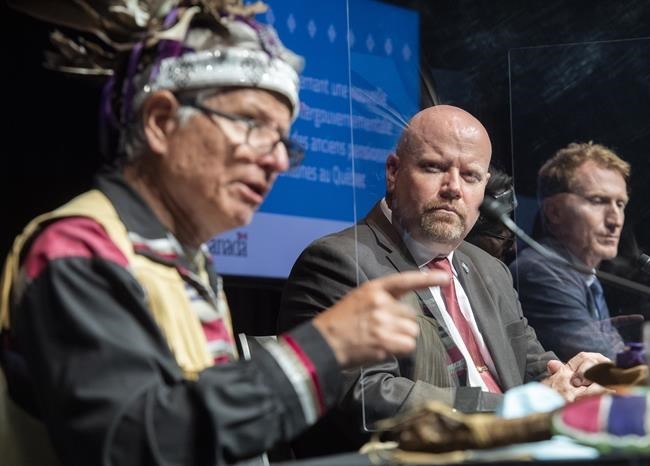 MONTREAL — The Quebec and federal governments unveiled plans on Saturday a central place for the province's Indigenous communities to go for support over former residential schools, easing concerns that the process would be mired in red tape.

Indigenous Affairs Minister Ian Lafrenière said Saturday the province would create a liaison officer post, easing concerns among communities that they would face a jurisdictional back-and-forth between the federal and provincial governments.

“The message (from the communities) was we do not want to play a game of ping-pong between the provincial and the federal government," Lafrenière said.

The announcement of a one-stop, simplified portal to help local Indigenous communities comes following the discovery of the remains of what are believed to be 215 Indigenous children buried at the former Kamloops Indian Residential School site in British Columbia.

Lafrenière says the facilitator will be on the job as of Monday and will help Quebec First Nations and Inuit communities in whatever decisions they take regarding former residential schools in the province.

That could include helping them uncover documents, secure sites and obtain resources to conduct physical searches or organize commemoration ceremonies. In Quebec, some communities have signaled they're ready to search while others want to consult.

The facilitator will be Michel Martin, a retired police officer who was police chief in Nunavik, in northern Quebec, and is well versed in navigating with government departments.

Lafreniere noted Martin's work will be done directly with the communities.

“I want the decisions to be taken by the communities, they are best placed to make decisions on what’s best for them, our role is to support them in those efforts," said Lafrenière, joined by federal counterparts Carolyn Bennett, minister of Crown-Indigenous Relations, and Indigenous Services Minister Marc Miller.

“The point we’re making today is nothing will happen without the full consent Indigenous communities affected by these schools,” Miller said. “Quebec and Canada won’t be pointing fingers at each other to say why we can’t do things.”

Other unmarked graves surely exist, Bennett said, as the Truth and Reconciliation Commission found at least 4,000 Indigenous children died in residential schools, a number that is likely higher, she said.

And Miller said the archives of the Catholic church are likely incomplete.

"These are archives that are in Winnipeg, but they are not complete," Miller said. "We don't know the extent of the truth, frankly. There are several orders that may or may not have records. It's a question that still hangs over our heads. ”

Richard Kistabish, an Algonquin and former chief of the Abitibiwinni First Nation who attended residential school, recounted how the schools ripped children from their parents, leaving lasting physical, moral, psychological and spiritual hurt that spans generations.

“We have to undertake the reparation of what was done and it must be done in different ways," he said. "Acknowledging your wrongs is one way. Telling the truth is another way, admitting is another way to make amends.”

Kevin Deer, an elder from Kahnawake, near Montreal, said he welcomed the announcement.

“But first and foremost, they’ll have to engage with the leadership of each community and ask: ‘how can we help?’,” Deer said. “Then you listen and you can be of assistance in the best possible way.”

The province said it wants to ensure whatever is done is culturally secure, and Lafrenière said a consultation circle that includes Indigenous elders will help with the decisions and ensure no one is forgotten in the process.

This report by The Canadian Press was first published June 12, 2021.