Quebec's Indigenous affairs minister said Monday that the province is open to searching the grounds of former residential schools for graves, if survivors and their families are in favour.
Jun 1, 2021 3:13 PM By: Canadian Press 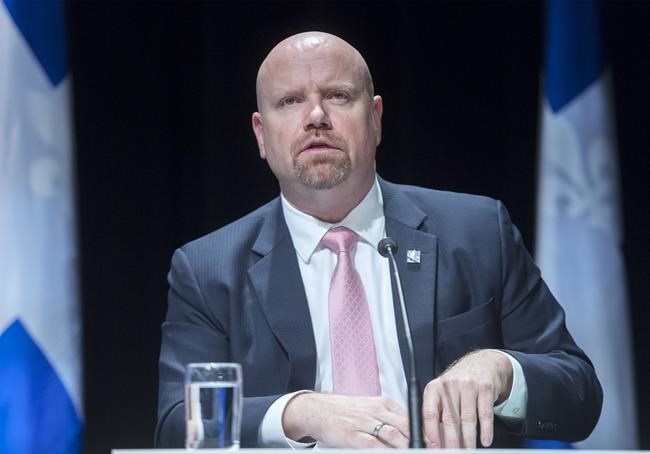 Quebec's Indigenous affairs minister said Monday that the province is open to searching the grounds of former residential schools for graves, if survivors and their families are in favour.

Ian Lafrenière said his office has started reaching out to families, Indigenous leaders and his federal counterpart to discuss the possibility.

The discovery of the remains of 215 children on the grounds of the former Kamloops Indian Residential School in British Columbia has prompted a fresh wave of scrutiny of the treatment of Indigenous people across Canada, and Lafrenière said Quebec must confront its own role in that history.

He said he has seen no evidence that there are unmarked graves on the grounds of the six former residential schools that he identified as having operated in the province but could not exclude the possibility. "Can I confirm we won’t find anything in Quebec? Not at all," he told reporters in Quebec City.

In addition to the six residential schools, there were also several federal hostels and day schools that operated in the province.

While some aspects of the operation fall under federal responsibility, Lafrenière said Quebec would be willing to provide logistical and technological support. "We can put that (together) with the knowledge of the elders from First Nations, and together we can solve these mysteries," he said.

He said a first step would involve securing the sites of the former residential schools, four of which are currently located on Indigenous lands. However, he said the province would wait for a green light from the families before doing so.

"I want to make sure this is the intention, this is the willingness of the families. I don’t want to impose anything," he said.

Lafrenière said he's spoken to federal Indigenous Services Minister Marc Miller, and the two have agreed to work together.

In a separate news conference, Quebec Premier François Legault said that while residential schools fall under federal jurisdiction, the province is ready to participate in eventual searches of the sites.

"We're going to do, with the federal government, everything necessary to get the maximum amount of information, because it's terrible, what those families experienced and are experiencing," he said.

Ghislain Picard, the chief of the Assembly of First Nations Quebec-Labrador, says he believes there are "definitely" cases of unmarked graves at residential schools in the province. He said identifying them can be difficult, especially because those involved are often reluctant to speak out.

He said he supports the efforts to shed light on what happened, but that right now the most important thing is to respect the "emotional impact" of the Kamloops discovery.

"Let the families grieve," he said in a phone interview. "I think that's, first and foremost, the most important part of this process."

He said the news of the graves has profoundly affected Indigenous communities all across Canada who are still grappling with the traumatic legacy of residential schools, including in Quebec.

"The impacts of the residential schools were the same," he said. "It doesn’t matter where you go, the stories are the same."

Lafrenière and Legault pointed out the government has tabled legislation that would allow relatives of Indigenous children who disappeared or died in health-care facilities between 1950 and the early 1990s to access information about their loved ones.

The law, which is expected to be passed in the coming days, would require health-care facilities, social services, organizations and religious congregations to transmit personal information about the missing or deceased children to their families, and give the government the power to launch an investigation into organizations that don't comply.

Members of the opposition, as well as Picard, have suggested the bill be expanded to specifically cover deaths at residential schools. Lafrenière said Monday that adding such a clause "is not going to change anything" because the relevant documents are federal in nature.

However, he repeatedly said the bill is just a start, and that the government isn't ruling out any potential actions in the future to ensure Indigenous families get answers, including holding a public inquiry if necessary.

This report by The Canadian Press was first published June 1, 2021.

— By Morgan Lowrie in Montreal