A 26-year-old RCMP constable hailed as a model officer was struck and killed by a truck he pulled over in rural Saskatchewan on Saturday, sending shock waves through his tight-knit policing community and the small town where he died. Const.
Jun 12, 2021 7:07 PM By: Canadian Press 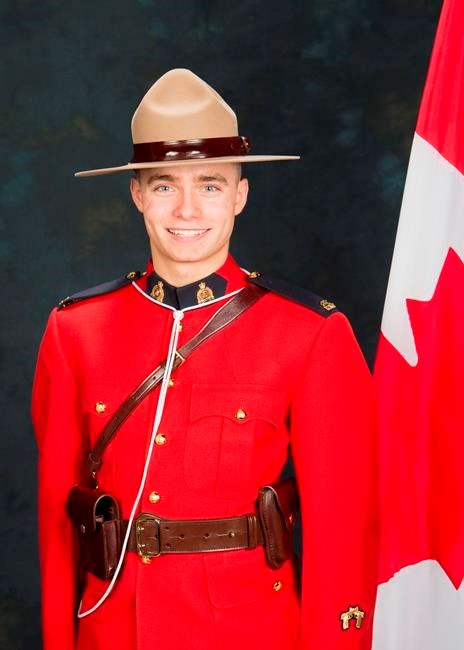 A 26-year-old RCMP constable hailed as a model officer was struck and killed by a truck he pulled over in rural Saskatchewan on Saturday, sending shock waves through his tight-knit policing community and the small town where he died.

Const. Shelby Patton had been following a suspected stolen truck before attempting a traffic stop in Wolseley, Sask., at about 8 a.m., Assistant Commissioner Rhonda Blackmore told a news conference in Regina.

She said Patton was hit by the truck while outside of his police vehicle. The truck drove off.

The officer died at the scene.

"The detachment commander actually mentioned to me, to create the ideal RCMP member, you would clone Shelby Patton," an emotional Blackmore said.

She said the officer had been working alone, and a Good Samaritan stopped to help.

She said a man and a woman were arrested two hours later about 90 kilometres away in a field northeast of Francis, Sask.

Their names have not been released, and there's no word on what charges they may face.

Blaine Muhr said he was one of the local farmers who gave police a hand after the suspects abandoned the truck from Manitoba.

He alleged the duo stole another vehicle from his neighbour and kept driving.

"Long story short, we helped give the cops a bit of an idea on the area, how the area was and where they might be. It all went good. The cops did their job … and got the guy and gal," Muhr said.

Scott Koronkiewicz, who owns the pasture where the pair was taken into custody, said he knew something was up even before he heard about the arrests.

"I could hear the sirens going down the highway this morning. I thought, ‘what the heck is going on?’" he said.

As of Saturday evening, he still hadn't been able to get to the land where the arrest took place because police are conducting their investigation, he said.

But Koronkiewicz said police have told him the cows that graze on the land are doing OK.

The RCMP's major crimes unit is investigating the crash and alleged vehicle thefts while the rest of the police service comes to grips with Patton's death.

Blackmore said Patton had been a Mountie for six years and four months, working most of that time out of the Indian Head detachment where he cultivated a reputation as a hardworking, dedicated police officer. He was briefly assigned to Parliament Hill in 2015, she added.

"Just an outstanding individual dedicated to the public of Saskatchewan," she said.

Blackmore said she, the Indian Head detachment commander and a chaplain broke the news to Patton's wife on Saturday morning.

"I am heartbroken for her and her family," Blackmore said. "Const. Patton's family is also part of the RCMP family. They have lost a husband, son and brother."

She said there will be mental health supports in place for them as they grieve.

Saskatchewan Premier Scott Moe said he, too, is mourning.

"Our grief is only matched by our tremendous gratitude to Constable Patton for his service, and to every police officer who serves and protects us every day," Moe tweeted.

"Know that I'm keeping you in my thoughts," he tweeted.

Meanwhile, Wolseley Mayor Gerald Hill said his town of about 850 people is in "absolute shock."

"It's one of those incidences that happen in our community — not ever. They're pretty shook up," he said of those living there.

“I feel very, very sorry he’s gone ... everyday I saw him at the mail office, up the road, always there cheering us up, saying hi to everyone. I always see him as my son. I’m sorry to hear he’s gone.”

Ken Drever, a Wolesley municipal councillor, said the community is shaken by the officer's death.

"You’re obviously upset," he said. "Something like this is something you don’t expect to happen here. We're just a small Prairie community. It's the sort of thing that you expect to be reading about, hearing about somewhere else."

It was much the same in Francis, where the two suspects were arrested.

Teresa Stottler was on her way back to her home in the town after a trip to the convenience store when she heard the sirens.

"Usually it’s pretty quiet around here, but not today."

This report by The Canadian Press was first published June 12, 2021.