MONTREAL — The husband of an Indigenous woman subjected to disparaging comments as she lay dying in hospital told a Quebec coroner's inquiry Thursday his wife didn't deserve to have her life end that way.
May 13, 2021 2:48 PM By: Canadian Press 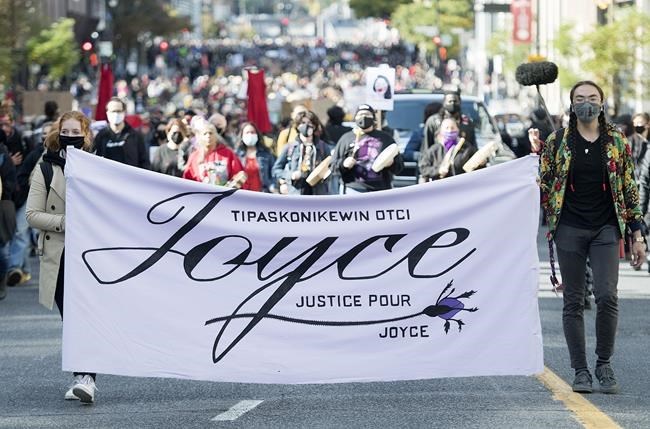 MONTREAL — The husband of an Indigenous woman subjected to disparaging comments as she lay dying in hospital told a Quebec coroner's inquiry Thursday his wife didn't deserve to have her life end that way.

Joyce Echaquan, 37, an Atikamekw mother of seven, livestreamed video from the hospital in Joliette, Que., last September as female staff were heard insulting and mocking her. The coroner's inquest into her death began Thursday.

Carol Dubé, 43, her husband of 23 years, told the inquiry Echaquan was an exceptional wife and mother. He said she loved life, family, animals and travelling through the territory of her ancestors.

“She didn't ask to end her life like that with those people who insulted her, who disparaged her," Dubé said, adding that getting justice for her would be the best outcome.

Dubé said after the birth of their sixth child in 2014, his wife had health problems, including heart issues and diabetes, and didn't like going to the hospital in Joliette, about 70 kilometres northeast of Montreal. He said although he had never heard any racist comments when he accompanied her, it was different when she went alone.

His wife, he said, was allegedly pressured into having three abortions and was apprehensive about seeking treatment there. Aside from comments, Dubé said she was also afraid of being restrained or given painkillers.

Echaquan was taken to hospital by ambulance with stomach pains on Sept. 26 and had told her husband in a text she had bleeding in her stomach. The pain had started a week earlier and got progressively worse.

She died in hospital on Sept. 28, not long after posting the video.

Dubé said he met with hospital officials the day after the death and they told him she had two litres of blood pumped from her stomach and was intubated. Her husband said they told him Echaquan's death was natural and there wouldn't be an autopsy. He noted the doctor delivering the news wouldn't look him in the eye.

Kamel took the exceptional measure of coming down from her chair to approach Dubé and express her condolences. Moments earlier, he had concluded by saying he was still grieving and trying to understand the actions of the staff.

"That's why we're here," Kamel said. "You will get those answers."

The couple's oldest daughter, Marie-Wasianna Echaquan Dubé, 20, testified she saw her mother's social media post and rushed to the hospital but was unable to speak to her. She said her mother was still restrained and health officials were in the process of trying to resuscitate her.

“I was scared seeing the video,” Echaquan Dubé said. “I was angry too, what I heard in the video, to see her cry, to hear her in fear.”

In an emotional plea, Echaquan Dubé said she wants answers to why her mother died how she did.

“I am here for my brothers and my sister, as I will continue to be," Echaquan Dubé said. "I'm here for Joyce, my mother … I'm here because I want justice to be done and I don't want anyone to forget Joyce Echaquan."

Kamel will preside over the public hearings and will hear from about 50 witnesses, including health-care staff, whose identities are protected by publication bans, expert witnesses and members of Echaquan's family.

The coroner said in her opening statement her role is to maintain an open mind, but she emphasized that the behaviour and attitude of hospital staff toward Echaquan are integral to understanding the circumstances of her death.

She said she was approaching the process with one certainty.

"I am deeply convinced that we must learn to live together and to welcome differences as a collective wealth," Kamel said. "These cultural differences are gems that should be welcomed by all who live in Quebec."

The probe will sit for 13 days between May 13 and June 2 at the provincial courthouse in Trois-Rivières, Que., about halfway between Montreal and Quebec City.

The first witness was Martin Pichette, a Quebec provincial police officer who oversaw an investigation into Echaquan's death. They spoke to 36 people during their investigation, he said, adding that nothing criminal was found to have occurred.

Dubé spoke to reporters outside the courthouse before the proceedings began, surrounded by his children and supporters.

"I feel ready, I feel confident," Dubé said, adding that they were the only comments he intended to make to the media until the hearings are complete. "I'm like you, I don't know what awaits us yet. I will try to understand, like you."

The family's lawyer, Patrick Ménard-Martin, told reporters it was an important step for a family that has been seeking answers.

A coroner's inquest does not rule on liability but rather looks at the causes and circumstances of a death and comes up with recommendations to avoid similar occurrences.

This report by The Canadian Press was first published May 13, 2021.