MONTREAL — A veteran Quebec nurse told a coroner's inquest Wednesday he had raised concerns about the care Joyce Echaquan had received at the hospital before she died and how she had lacked supervision.
May 26, 2021 3:44 PM By: Canadian Press 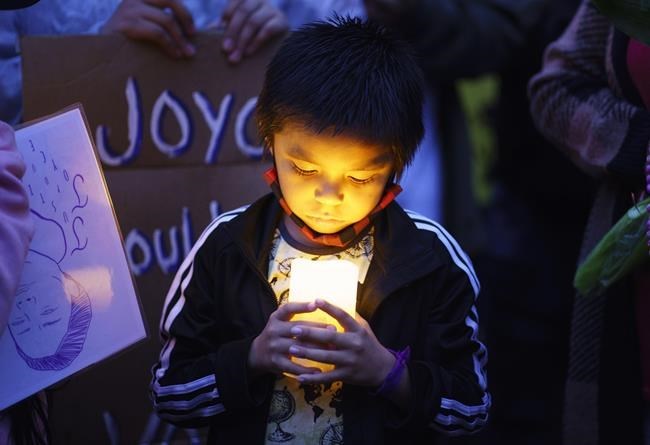 MONTREAL — A veteran Quebec nurse told a coroner's inquest Wednesday he had raised concerns about the care Joyce Echaquan had received at the hospital before she died and how she had lacked supervision.

The nurse, a 20-year veteran whose identity is protected by a publication ban, was the final front-line health worker to take the stand at the inquiry, which is investigating the death of Echaquan, a 37-year-old Atikamekw mother of seven. She had filmed herself on Facebook Live as a nurse and an orderly were heard insulting and mocking her shortly before she died on Sept. 28.

"I was unhappy with the situation," he told coroner Géhane Kamel on Wednesday.

He said he had been making his rounds when he saw a young nurse in training who was overseeing Echaquan's care and who seemed overwhelmed and discouraged. The young woman had told him the hospital's assistant head nurse had twice refused to transfer Echaquan to the resuscitation room, he said. Another nurse, he added, had also tried and failed to get Echaquan transferred.

There have been many questions raised during the inquest about why there was a delay in transferring Echaquan, who was also left without proper surveillance while she was restrained to a stretcher. The inquiry learned Echaquan was not connected to a heart monitor despite her cardiac problems.

The nurse said Echaquan's condition — in restraints and on Haldol, an antipsychotic drug used at the hospital to calm agitated patients — demanded closer surveillance that could only be provided in the resuscitation room, which is reserved for the most serious cases.

He said that after he had approached head nurse Josée Roch, she had told him about the Facebook video Echaquan had filmed. The nurse said Roch had told him, "What do you want me to do?" when asked about Echaquan's care.

He said that at the time he wasn't aware of the existence of the video, which circulated widely on social media after Echaquan's death, prompting widespread indignation across the country.

"I told her I don't care about a video. I want to take care of the patient, and (Echaquan's) in the wrong place," the nurse testified.

He said that later on, he had heard a commotion outside his office and had noted that Echaquan was rushed to the reanimation area and wasn't breathing.

The witness suggested there might have been a breakdown in care and that a nurse in training — who had graduated from junior college but not yet received her licence — was not the right person to be at Echaquan's bedside. He said the newer staff at the hospital weren't properly supported.

"Certainly, there was a lack of staff, and the person who took care of Ms. Echaquan was not the best person or the most experienced, so yes, there was a breakdown in the service," the nurse said.

He told the inquiry he is friends with the nurse who had been filmed by Echaquan and who had been fired. He choked up as he spoke about her, saying she had been crying and apologizing for what she did. The nurse said the woman had saved countless lives and had helped many doctors avoid errors.

The nurse wore his uniform on the witness stand and said he was proud of the work he and his colleagues do, treating 66,000 patients last year with few complaints.

"I was discouraged, I didn't agree with the comments (in the video)," he said. "But I know that words don't kill people either."

He did agree, however, when a lawyer asked him whether words kill confidence in the health-care system.

Roch was the last witness on the stand Wednesday, and she told the inquiry she had never been approached by a staff member complaining about hearing racist comments at the hospital.

"I think racist comments were present, but I never personally heard them," Roch, the head nurse at the Joliette hospital, told the inquiry. "I’m almost 50, you hear things, so I can’t say it wasn’t happening at Joliette, I think it does exist. That’s why it needs to stop."

She told the inquest that when she finally saw the video filmed by Echanquan, in which an orderly and a nurse are heard insulting the dying patient, "I couldn't believe it."

The nurse, whose name is protected by a publication ban, was heard at various points in the seven-minute video saying Echaquan was stupid, good for sex, a drain on the health system and better off dead.

"My values are not like this," Roch said. "It’s about taking care of the patients the best way we can, so I couldn’t conceive the fact that one of my nurses said that."

Coroner Kamel asked Roch whether the hospital staff would have believed Echaquan's family had the video not existed.

"This is what keeps me from falling asleep at night lately," Roch responded.

Her testimony is scheduled to continue Thursday.

This report by The Canadian Press was first published May 26, 2021.

— With files from Virginie Ann in Montreal.