MONTREAL — A nurse who works at the Quebec hospital where Joyce Echaquan died last year told a coroner's inquest Tuesday there is a perception among her colleagues that Indigenous people are alcoholics or drug addicts.
May 18, 2021 3:24 PM By: Canadian Press 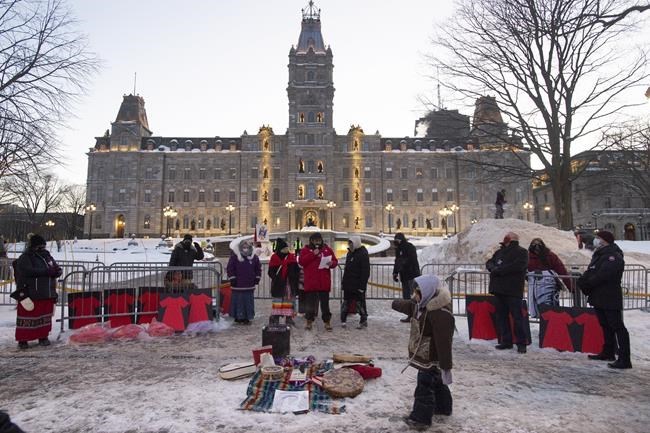 MONTREAL — A nurse who works at the Quebec hospital where Joyce Echaquan died last year told a coroner's inquest Tuesday there is a perception among her colleagues that Indigenous people are alcoholics or drug addicts.

The inquest is investigating the death of Echaquan, a 37-year-old Atikamekw mother of seven who filmed herself at the hospital northeast of Montreal as female staff were heard insulting and mocking her shortly before she died Sept. 28.

The nurse, whose identity is protected by a publication ban, initially told the inquiry she had never heard any negative comments by staff toward Indigenous patients. But she revised her testimony after pointed questioning from coroner Géhane Kamel, admitting there were issues between the Atikamekw community and workers at the hospital in Joliette, Que.

"In my opinion, I think there is a problem with the Joliette hospital with the (Atikamekw) community," the nurse said, agreeing with the coroner there was a perception among her colleagues that those patients have problems with alcohol and drugs. "We hear a lot of comments like that," she said.

Kamel said she welcomed the honesty from the witness, one of four nurses and an orderly testifying on Day 4 of the public hearings in Trois-Rivières, Que.

From the onset of the inquiry, Kamel has said the behaviour and attitude of hospital staff toward Echaquan are integral to understanding the circumstances of her death.

"Maybe you are the first step toward this reconciliation," Kamel said. "I hope that those who follow you (to the stand) will be able to sit before me and tell me this."

But the nurse stood out from other witnesses, who largely maintained they were unaware of rudeness, derogatory comments or prejudicial views towards Indigenous or non-white patients, although some added the proviso that they couldn't say it never happened.

On Monday, Kamel had urged honesty from participants after hospital staff testified they weren't aware of derogatory comments toward Indigenous patients or other minorities.

The coroner has said repeatedly she finds it hard to believe everything was perfect at the hospital. Members of the Atikamekw community from Manawan, Que., have said they're fearful of seeking treatment at the hospital, and since Echaquan's death, staff have been required to watch a three-hour video about the community's history and culture.

Staff have testified that training did little to address day-to-day interactions with Indigenous patients.

The first nurse to testify Tuesday said that on the evening before her death, Echaquan had asked to be restrained to the hospital bed while in an agitated state.

Echaquan's relatives have testified they were shocked to find her body in restraints after she died. Family members have told the inquiry that Echaquan told them she didn't like to be restrained at the hospital.

Dr. Jacques Ramsay, who is assisting Kamel, told the inquiry he had never heard of a patient asking to be restrained. The nurse, however, insisted that Echaquan had asked for the restraints, adding that the patient said they calmed her.

She recounted seeing a Facebook video Echaquan's daughter published from the hospital — the contents of which are under a publication ban. “It was like watching her (Echaquan) die,” the nurse said in tears, noting she didn't appear to be breathing. She added that she felt Echaquan's death was preventable.

The last witness, an orderly who was working the morning Echaquan died, testified she has noticed Atikamekw patients filming more often during hospital stays since her death. Moments earlier, Kamel had lamented that people had to film to be heard in 2021.

This report by The Canadian Press was first published May 18, 2021.