The legislative session in one of Canada's most active COVID-19 hot spots is being temporarily suspended, while at least two other provinces looked forward to ramping up vaccinations in the week ahead.
May 2, 2021 3:37 PM By: Canadian Press 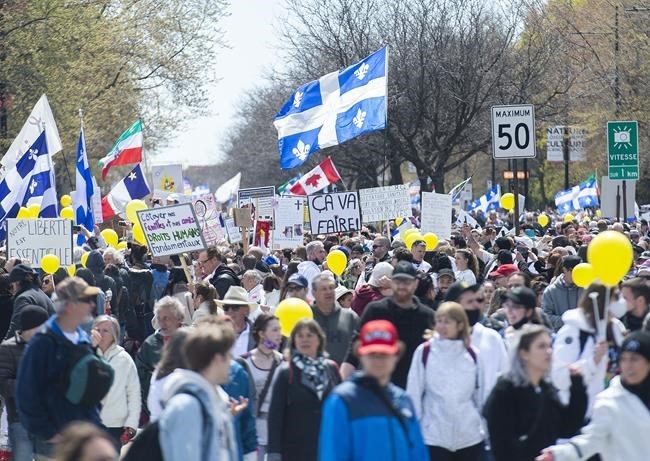 The legislative session in one of Canada's most active COVID-19 hot spots is being temporarily suspended, while at least two other provinces looked forward to ramping up vaccinations in the week ahead.

The two-week legislature suspension in Alberta aims to prevent the further spread of COVID-19, which has led to record-high case counts in recent days, Government House Leader Jason Nixon said in a news release Sunday.

Opposition Leader Rachel Notley met the claim with skepticism, accusing Premier Jason Kenney of shirking his duties at a critical time in the pandemic.

“Alberta needs real leadership at this moment of crisis, but instead Jason Kenney is abandoning his post,” Notley said in a news release.

The news came as health officials condemned an anti-lockdown rodeo that attracted hundreds in the rural community of Bowden, Alta., in defiance of public health orders.

Alberta Health Services said in a statement that it's exploring legal options after the No More Lockdowns Rodeo went ahead on Saturday despite warnings that it was illegal, and on a day that saw Alberta record 2,433 new cases.

"It is extremely concerning that people would knowingly put their fellow Albertans at risk by ignoring the restrictions, particularly with increasing cases and the subsequent pressure on our healthcare system," Alberta Health Services said.

The number of new cases decreased Sunday to 1,731, though hospitalizations and intensive care admissions rose slightly.

As Alberta found itself in the midst of a surging wave of infections, some other provinces prepared to shift course thanks to stabilizing case count, while ramping up vaccinations.

In Quebec, a former hotbed of infections, cases held steady at just over 1,000 and authorities prepared to ease some public health measures.

The province announced last week that it would allow elementary school students in Quebec City to return to class on Monday.

The nighttime curfew in Montreal and neighbouring Laval is also moving from 8 p.m. to 9:30 following about two weeks of stable cases and a slow decline in hospitalizations.

Quebecers aged 45 and up will also be able to book their vaccine appointments beginning Monday as the province gradually widens access to the general population in descending order of age.

The coming week will also see a significant expansion in the number of Ontario residents eligible for a COVID-19 vaccine, the province announced Sunday as it made good on a promise to ramp up efforts in areas hit particularly hard by the pandemic.

All adults 18 and older living in any of 114 designated hot spot postal codes will be able to book their shots through its online portal as of 8 a.m. Monday, the government said.

The move comes days after the province pledged to allot half its vaccine supplies to areas with particularly high case counts over the next two weeks.

Ontario reported a rise of 3,732 new cases of COVID-19 Sunday, though the province also recorded a decline in both virus-related hospitalizations and admissions to intensive care units.

On the prairies, Saskatchewan saw a slight dip in infections to 262, while Manitoba ticked up to 281.

Atlantic Canada also added to its case count, with 133 in Nova Scotia, one on P.E.I., six in New Brunswick, seven in Newfoundland and Labrador, plus 11 aboard a ship anchored in Conception Bay.

This report by The Canadian Press was first published May 2, 2021.