What is short selling? Whipsaw for GameStop stock puts scrutiny on the practice

TORONTO — A recent share-price rally, then plunge, in typically sleepy companies such as GameStop has put a spotlight on a long-standing stock market practice called short selling.
Jan 28, 2021 2:00 PM By: Canadian Press 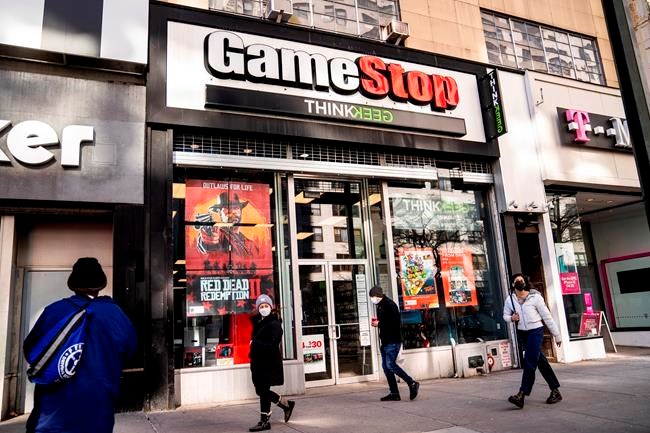 TORONTO — A recent share-price rally, then plunge, in typically sleepy companies such as GameStop has put a spotlight on a long-standing stock market practice called short selling.

In an example from Steve Foerster, finance professor at Western University's Ivey Business School, say you think a stock trading for $100 is overvalued, because you think its shiny new product isn't any good - it's worth just $50 for a share. You can borrow the stock, sell it at $100, and plan to buy it back later at the lower price -- pocketing the $50 for yourself.

But the stock market is never a sure thing. If the stock instead goes up in price, it can lead to losses for a short-seller.

If the short seller has to buy the stock back at a higher price instead of their expected lower price, it can drive up the stock price even further, creating what's known as a "short squeeze."

According to the Canadian Securities Administrators, short-selling in general is a "legitimate trading practice which contributes to market liquidity and price efficiency," that can prevent stocks from becoming overvalued and lets investors hedge their bets.

How does it work?

Some short sellers are considered "activist" investors, because they will publicly release a report or analysis explaining why they have concerns about a stock's price, a Canadian Securities Administrators report released last month said. This is different than an average investment fund, like a pension fund.

The CSA report notes that some short sellers view their work as a "first line of defence against fraud and subsequent losses."  Famous short sellers include Carson Block of Muddy Waters Research, who triggered an investigation into Sino-Forest in 2011, as well as Jim Chanos, who bet against Enron in the early 2000s.

But the CSA report also notes that the value or harm in activist short selling depends on whether the information these funds provide is accurate, and whether it is shared to manipulate markets or distort prices.

"Activism by short selling is premised on effecting a loss of shareholder value for the target issuer, which makes it controversial," the report said.

"Activist short sellers are also criticized for being driven by short-term trading profits rather than promoting long-run price accuracy. However, they can also serve as a countervailing check on the potential for excessive market optimism."

Does short-selling happen in Canada?

While U.S. companies have been a major focus of the recent short squeezes, short-selling also happens in Canada. In fact, the CSA's paper was created as part of a consultation on whether regulators should intervene in activist short selling.

It found that between 2010 and September 2020, 73 Canadian companies had been the target of 116 short-selling campaigns.

The CSA's consultation paper said that activist short-selling campaigns have spread faster in the age of social media — and that potential misinformation around a stock can spread quickly, too.

The Investment Industry Regulatory Organization of Canada said in the same report that it monitors for potentially abusive short sales, including reviewing social media and chat rooms.

What about short selling upsets people?

This week, short sellers and investment firms like Citron Research and Melvin Capital found themselves on the losing end of bets against the GameStop stock, which was among the most shorted stocks on Wall Street.

On social media, some users had little sympathy for the funds' losses, as headlines cast stock buyers as a group of Davids downing hedge fund Goliaths.

The social media swell against short-sellers has also come to the fore during a pandemic that has widened economic equality. BDO Canada Ltd.'s affordability index report in October estimated that nearly two in five Canadians said their personal finances deteriorated during the first wave, while one in five Canadians are better off.

Some social media users have pointed to the last financial downturn, when the idea of "shorting" became mainstream through Michael Lewis’ book “The Big Short," later a movie nominated for best picture at the Academy Awards.

“The same rich people that caused the market crash in 2007/08 are still in power and continue to manipulate the market to get even richer, we are just taking back our fair share,” one user wrote on Reddit.

— With files from Brett Bundale in Halifax and The Associated Press.