A restaurant industry group is asking Canadians to imagine life without local restaurants after it says the country lost more than 10,000 eateries since the introduction of pandemic lockdowns.
Dec 16, 2020 12:38 PM By: Canadian Press 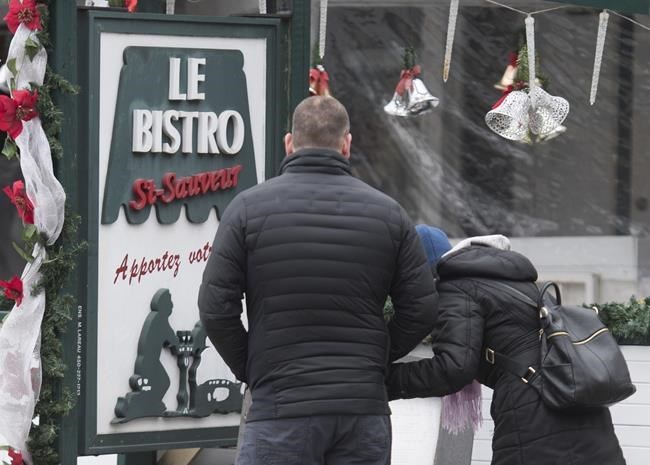 A restaurant industry group is asking Canadians to imagine life without local restaurants after it says the country lost more than 10,000 eateries since the introduction of pandemic lockdowns.

In an effort to help them survive, Restaurants Canada is calling on customers to support their local food and drink establishments this holiday season by buying gift cards, ordering takeout or delivery, and dining in where possible.

The campaign, called "Picture life without restaurants," includes a one-minute video reminding people about the importance of restaurants in day-to-day lives and for special occasions and is paired with the hashtag #RestaurantsAreFamily.

"This is where you had your first date, and where she said yes," the video narration says, as a woman holds an engagement ring over dessert. "This is the kids summer treat, and your winter comfort."

It adds: "These are the moments we don't want to lose. Take action. Support restaurants for the times they supported you."

Todd Barclay, president and CEO of Restaurants Canada, said the holidays are usually one of the busiest times for restaurants.

But with so many regions under lockdown, he said the coming weeks could be devastating for restaurants.

"We are asking consumers to take a stand and show their support for their local restaurants during this crucial time of the year," Barclay said in a statement Wednesday.

“It really does take a village and together we can support the foodservice and hospitality industry – from restaurants and bars to farmers, food and beverage brands – for all those times they supported us."

The restaurant group said no other industry in Canada has been hit as hard as restaurants during the pandemic.

At the height of the crisis, an estimated 800,000 restaurant jobs were lost or saw hours reduced to zero.

While the industry recorded a steady recovery between May and September, the industry group said restaurants started to lose ground again in October.

Statistics Canada's latest labour force survey found the sector is still 260,000 jobs short of where it was last February.

Restaurants Canada is warning the situation could worsen. Even among the restaurants that have survived so far, half expect to permanently shut down if conditions don't improve.

Brenda O'Reilly, owner of four restaurants in Newfoundland and Labrador, said eateries rely on a busy December to get them through the "dark months" of January and February.

But she said December has been "fairly devastating" so far.

"Almost every Christmas party event we had booked has been cancelled," said O'Reilly, whose usual complement of 300 staff across her four locations has been halved to 150 workers.

"Normally we see a lot of hustle and bustle this time of year with family events and colleagues going out to lunch but almost all of that has dried up."

She said buying gift cards or ordering takeout for lunch or supper would provide local restaurants with the cash flow needed to survive the coming months.

"We don't have enough revenue and we've got too many expenses, so any cash flow would help."

This report by The Canadian Press was first published Dec. 16, 2020.