Camryn Rogers has dominated the hammer throw on the US collegiate circuit this year to earn her spot on Team Canada
Jul 13, 2021 1:01 PM By: Alan Campbell 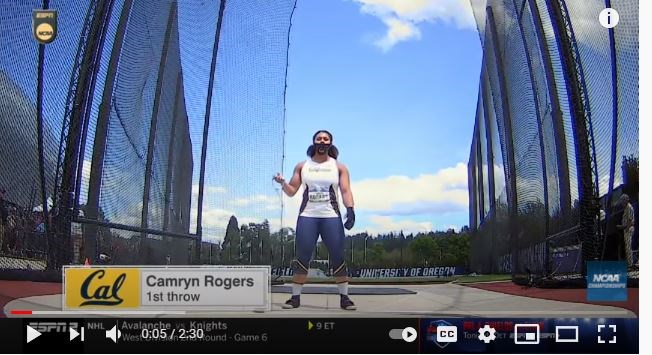 McMath secondary and Kajaks alumnus Camryn Rogers is making her Olympics debut in Tokyo in the hammer throw.

Rogers has been starring down south in the NCAA for the Cal-Berkley Bears, shattering U.S. collegiate records in the process.

Just last month, she threw an incredible 75.52 metres — the fourth longest throw in the world this year — to win gold.

Rogers initially broke the previous NCAA record of 73.32 with her first throw of 74.97, before beating it again with a 75.52-metre launch on the final throw of the competition.

She won the 2016 Canadian U20 titles in both shot put and hammer throw and made her international debut for Canada later that year at the U20 World Championships.

In 2017, she focused primarily on the hammer throw and later that season, she represented Canada at the U20 Pan American Championships and won the gold medal.

In 2018 Rogers made her second appearance at the U20 World Championships and won the gold medal and was awarded the Eric E. Coy Trophy as Canada’s top U20 track and field athlete of the Year.

Just to keep the ball rolling in 2019, she competed in her first senior Canadian Championship and again came away with gold.

Away from the sport she excels at, Rogers is studying to become an environmental lawyer.