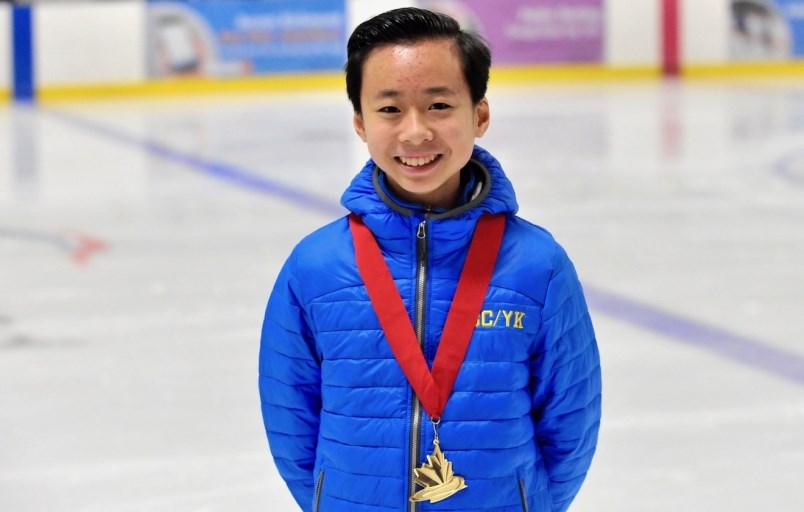 When Wesley Chiu was named to Skate Canada’s 2019-20 NextGen team, he wasn’t even able to be on the ice.

For two and a half months, the 15-year-old international figure skater, and member of the Connaught Skating Club, was unable to practice with rinks closed due to COVID-19.

Despite that, he received “remarkable” acknowledgement from officials at the NextGen camp, held over the Sept. 18th weekend at Burnaby Scotia Barn, according to Keegan Murphy, director of skating programs at Connaught and Chiu’s coach.

Chiu was named to the NextGen team in April.

At the camp, Skate Canada officials noticed a “remarkable improvement in (Chiu’s) technical advancement, along with an improved engagement to the performance side of his skating,” said Murphy.

“To receive such positive feedback from Skate Canada, after that break, that just says a lot about Wesley’s commitment to his training even with the rink being shut down,” Murphy said.

While the rink was shut down, the skating club took to Zoom, coaching about 150 athletes a week with a mixture of ballet, Pilates, cardio and flexibility classes, said Murphy.

That weekend in Burnaby is likely the only time the camp will be held this year, said Murphy. Typically, NextGen camps are held twice a year in Toronto, in June and October, amid various competitions.

With “stiff criteria,” including age and technical ability, being named to the team is a “prestigious invitation,” he said. This is Chiu’s third year on the team, which Murphy said was a “great honour.”

“(They tell you) what they want you to work on in. If they see you in a competition in the next couple months, what types of things are they looking to see a difference in,” he said.

“It’s a really positive process for the athlete, especially when they’ve have very little opportunity to gain feedback because we haven’t had competition.”

Chiu said this year’s camp was “a great learning experience.”

“I enjoyed the feedback session the most because it was very beneficial to get some feedback on my new programs that I was unable to show, due to cancelled competitions,” he said.

“After being off the ice for two and a half months, having the opportunity to skate in front of judges again really put me back on track to prepare for the upcoming season.”

Chiu, who has been skating since he was four years old, is one of the youngest male athletes in Canada to ever complete the triple axel jump in competition, said Murphy.

Since mastering the skill in late 2019, he’s spent much of 2020 improving his speed across the ice and his performance ability.

Looking ahead, Chiu and Murphy will be preparing for a regional competition in the next few weeks, which will be judged virtually.

They’ll also be gearing up for Provincials in mid-November, which will put Chiu on track for the rest of the season, heading into the national championship in January.